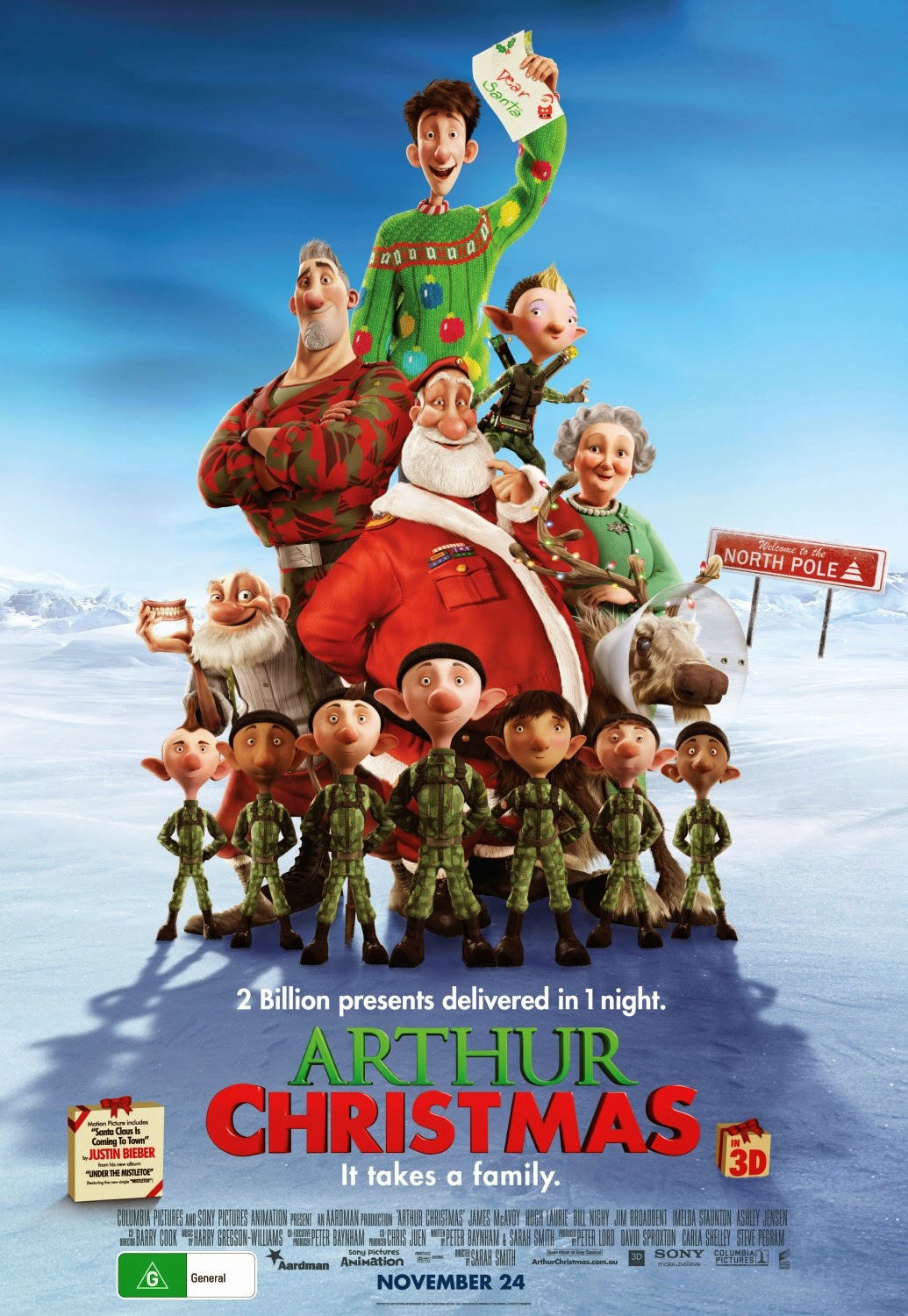 You know what I never thought I needed? Another Santa movie. Everyone thinks that it's a great idea, but there are only so many ways you can adjust the Santa legend to be “cool.” Remember when Tim Allen found out that being Santa Claus was contagious? That worked, but only once. Or what about Santa having a brother named Fred? That didn't pan out so great. I think it's hard to try and make such an old tale fresh again, and Arthur Christmas gives it another try.

The movie starts with Santa (Jim Broadbent) and a elite team of elves flying across the world in their state of the art present delivering ship. This is Santa's 70th year as the big man and is expected to pass the torch to his oldest son Steven (Hugh Laurie), just as his father did to him so many years ago. His other son, Arthur (James McAvoy), doesn't get as much recognition, but loves Christmas and enjoys his job in the letter department as he gets to correspond with all of the little boys and girls. The Christmas night is complete and it turns out Santa isn't quite ready to leave his position as head Claus. However, due to an error, one present got left out from the drop and there is a young girl in England who will wake up on Christmas morning with nothing from Santa. Steven says that it's a reasonable margin of error, after all, billions of children got their presents. Santa doesn't think it can be done in time. Arthur, however, won't give up and recruits the help of Grandsanta (Bill Nighy), Santa's father, and they go off to do an unauthorized present drop in Santa's old sleigh.

Arthur Christmas was just not a film I had any intention of seeing. A lot of the time kids Christmas movies just aren't my cup of tea. But I started to find out more and more about it and eventually decided it was worth checking out. First was the fact that it was made by Aardman Studios, the creative forces behind the brilliant Wallace and Gromit series as well as Chicken Run. This isn't their first venture into computer animation, but it is the first time they distances themselves from their typical Aardman art style; Their CG film Flushed Away imitated their token claymation look. The other main thing that brought me to see this film was the overwhelmingly positive reviews. It is currently at 92% on Rottentomatoes, which is impressive for a holiday kids movie, to say the least.

I would say that it might be a little bit overrated by the critics, but I can't deny that Arthur Christmas is a really charming little movie. It's a lot of fun and I like their take on the “modern” Santa where he has a militarized team of elves and a state of the art flying ship with camouflage capabilities. They really took an amusing, unique spin the Santa story.

The story moves at a fairly good pace for the most part, except for the first act. The opening half hour happens all very fast and there is so much business going on that it can be a bit too much to take in and might be a bit off putting. Once the main conflict is established however, the story movies at a comfortable speed and we get to understand the characters better and see that there is more to them than the caricatures that they could have fallen back to. The script is also surprisingly witty at times. It is very kid friendly, but isn't without some bite at times, particularly from scenes with the Grandsanta.

While the movie is flawed, it is a good time overall. And it helps that the protagonist, Arthur, is extremely loveable. That's what makes the movie work. Just like its hero, it is so well intentioned that you really don't want to hold anything against it. It just tells a simple story about a young guy, living under the shadow of his father and brother, but still just trying to do the right thing, regardless of reward or recognition. So, yes, I'd say that's a film worth taking your kids to.