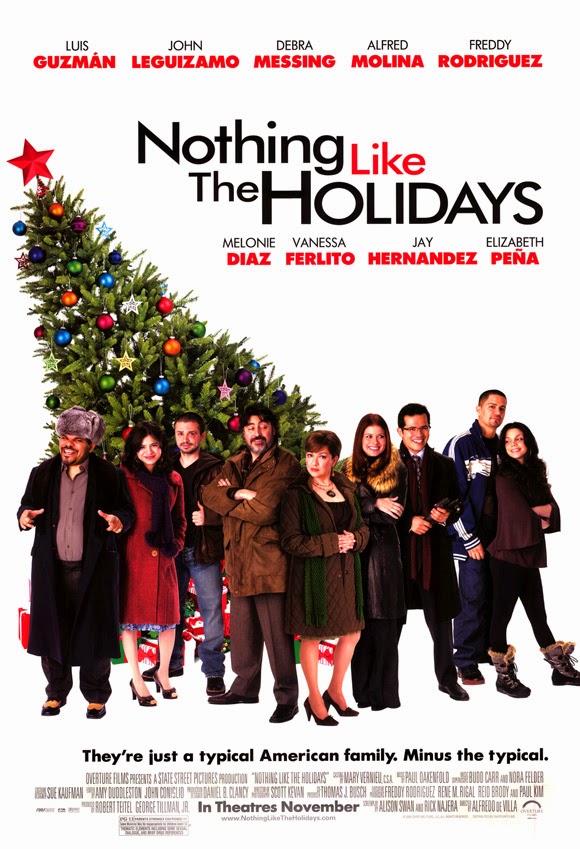 When Nothing Like The Holidays came out a few years ago, I was quite interested in seeing it. I hadn't had the chance until just a few days ago, but I knew I'd get around to it eventually. It seems that in recent years Christmas movies have gotten to be very commercial. Often it's about crazy shopping or competitive neighbours putting up lights or some outlandish story involving Santa Claus. I think that these days we don't seem to make many Christmas classics and that's because I can't help but feel that there is a real human element missing in the holiday film genre. So, when I saw this trailer, I felt that it promised to fulfil exactly what was missing.

It follows a Puerto Rican family in Chicago. All of the grown up kids have come home for Christmas and have brought their stories home with them. Jesse (Freddy Rodriguez) has just come back after 3 years serving in Iraq. Mauricio (John Leguizamo) has a workaholic wife. Roxanna (Vanessa Ferlito) is a struggling actress in Hollywood. But they're all together under one roof again and able to enjoy the company of each other and their parents. However, their mother Anna (Elizabeth Peña) announces over dinner that she is going to divorce their father Edy (Alfred Molina). Guess that ruins Christmas, right?

Nothing Like The Holidays seems like the kind of movie that meant a lot to the people who were making it. And I imagine that it will connect with some people and not as much with others. I could relate to it because I come from a bigger family and can understand the difficulties with getting people together for Christmas and the joy that comes with having family under the same roof.

The movie boasts an excellent cast. Check out this list: Luis Guzmán, Alfred Molina, John Leguizamo, Jay Hernandez, Melonie Diaz, and that girl from Death Proof. It's a great collection of Latin American actors who deserve roles with a little bit of meat to them. And they get that in Nothing Like The Holidays. Most characters have a story arc and internal conflict and they all have great chemistry with one another, shooting fast dialogue as if they were actually family. If the movie has one thing going for it, it has to the the performances.

The script is mostly good. As I said, the dialogue is strong. It has enough comedy and drama to feel like real interactions between siblings. The characters are well rounded and complex, and I easily got a sense of what kind of person they are without clunky exposition. There was a good amount of development in that aspect of the script. There were, however, a few issues in the story department. There might be just a few too many subplots. I appreciate wanting to take time with all of the characters, but it might have been stronger if they kept the development in the immediate family because it starts to feel a bit forced when there are some lesser characters with stories that seem a bit tacked on. There isn't enough time to focus on all of those plots, so their resolution seems meaningless. The film tries so hard to balance all these stories; they're lucky they didn't all topple.

I also can't shake the feeling that the ending was a bit rushed. There was a lot that needed to be resolved, and while it all was technically, I don't believe I felt the necessary satisfaction that could have come from it. All it needed as a bit more time and focus on some of the right things. I don't think that I can elaborate too much more than that, because I wouldn't want to ruin it for you.

Christmas doesn't play that much into the story. It serves as a backdrop to the events as well as the most logical reason for all of the characters to converge together. This is good. It allows for a real story that doesn't revolve around holiday contrivances. No shopping. No Santa. Just real human interaction at a time where family is the focus. Nothing Like The Holidays is enjoyable, fun and emotional, but it never reaches the cohesive whole that might have elevated it to becoming a holiday classic. Most of the ingredients were there, but something went wrong with the stuffing.