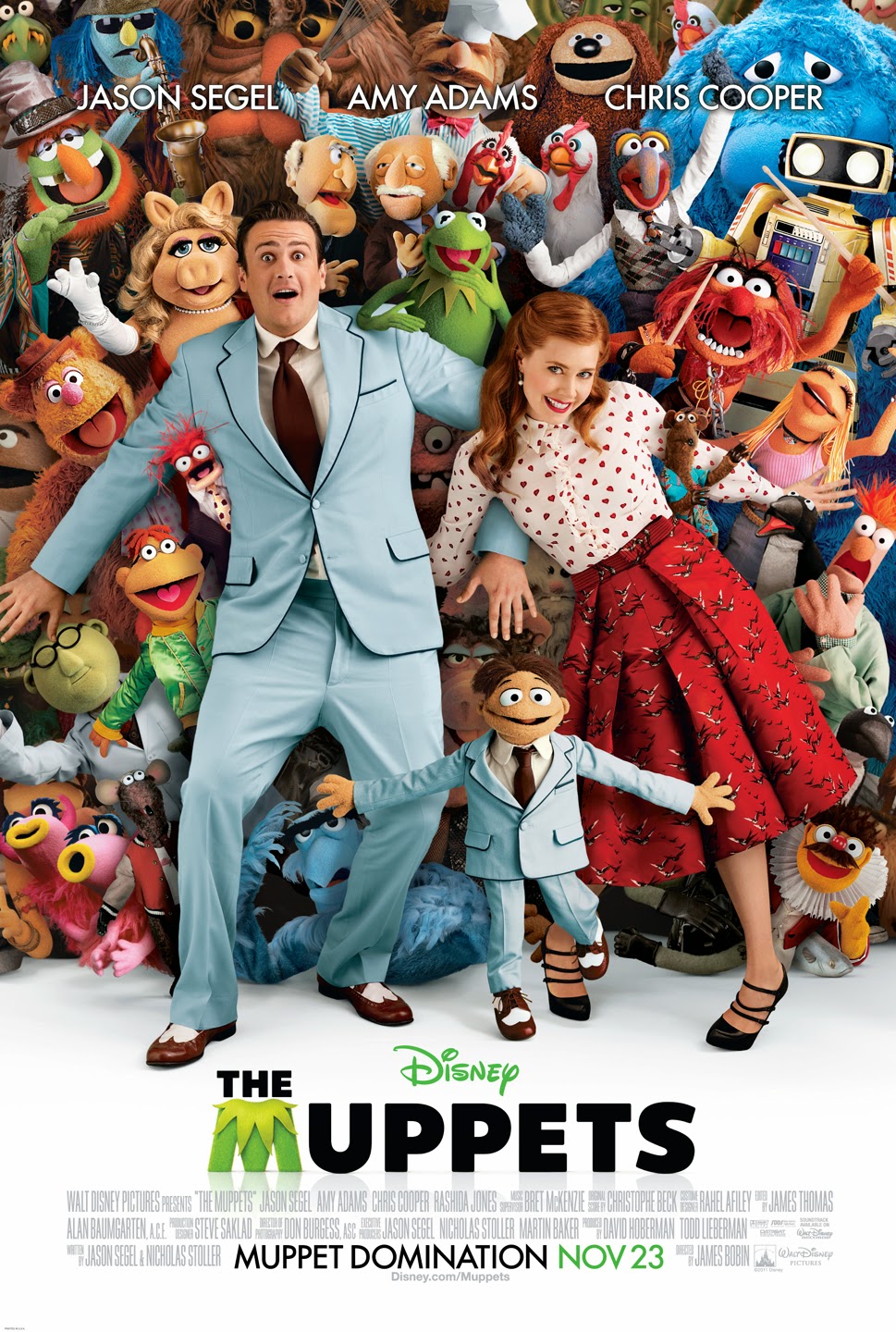 Where have the Muppets been? Seems that after a good run in the 90's with three feature film as well as a second TV show called Muppets Tonight, they suddenly dropped off the face of the planet. They had a couple of made for TV films, but they hardly made a splash. One day however, Jason Segel and Nicholas Stoller, the creative minds behind Forgetting Sarah Marshall, pitched an idea to revive the Muppets to Disney and that became this movie. Simply titled The Muppets, this film was a chance for the characters to be on the big screen again for the first time in 12 years.

It starts with two brothers, Walter and Gary (Jason Segel), who grew up together watching The Muppet Show. Walter is a puppet who doesn't quite feel a sense of belonging as... well, he's a puppet. Gary is human. This isn't really explained, but that's fine. They are now fully grown up... well, Gary is and is going to celebrate his ten year anniversary to his long time sweetheart Mary (Amy Adams). They are going to take a trip to Los Angeles, but Gary invites Walter along so they can visit the old Muppet theatre. However, as they get there, Walter learns about Tex Richmond (Chris Cooper), an oil tychoon's evil plan to destroy the old theatre for the oil that's underneath it. So, Walter, Gary, and Mary go off to find Kermit and the other disbanded Muppets to earn enough money to get their old theatre back.

With so much riding on this film, it had to be done well and capture that original Muppets spirit. And the good news is that it is extremely successful. The Muppets have always been pretty much aware that they are just puppet characters on TV or film, and this story is no exception. It's often self referential, inserting numerous lines about how it is just a movie. But it goes much deeper than that. The whole story is in many ways very self reflective on the Muppets and where society is at the moment. They are out of touch with modern society, but that's society's bad, not theirs.

There is a dark truth revealed in this film (through satire, of course). Entertainment isn't what it used to be. Everything is so much darker and dirtier these days. Maybe kids really do need the Muppets. They, and this movie, provide a very sweet and wholesome storytelling and that seems rare these days. But it's not like they talk down to their audience, in fact, just the opposite. The humour is quite smart and genuine. Both kids and parents will walk away quite happy from this one.

The Muppets plays heavily off of nostalgia. It makes us miss those good old days when The Muppets were TV staples and a reliable source of entertainment. It makes us miss the ingenuity of the performers and the loveable personalities of the characters they created. In a lot of ways, this movie resembles Toy Story 3. The story is entirely different, but it moves in similar ways. First, it establishes that things have changed and the relationship you had with the Muppets isn't what it used to be. And just as it seems that you can recapture that old feeling, they are put into situations where their well being is in jeopardy and the audience can only watch as their childhood is potentially destroyed before their very eyes. Of course, it can be seen as a manipulation game, but to some degree all movies are manipulative. If they aren't, they're not doing their job. And it wouldn't even work at all if we didn't already love these characters. It's just further proof that they haven't lost their relevance and can still connect with a modern audience.

While many people who grew up with the Muppets are most familiar with the characters from the 70's, I was a child of the 90's and we had a different set of regular characters. Rather, the set was expanded. Some of these 90's characters were all but ignored in this film, which is somewhat understandable, but unfortunate. I was really hoping for at least a little bit from Rizzo the Rat, who was a big player in the three 90's Muppet films and had a good double act with Gonzo. Also, Clifford was missing, who was best known for being the host character in the Muppets Tonight TV show. I liked this character, but can understand a little more as to why he wasn't included. I think he just wasn't that popular.

There are numerous cameos from celebrities, some are quite entertaining. Watch for Dave Grohl. That one is my favorite. Jason Segel, despite most of his films being geared more toward an adult audience, fits in very well with the Muppets and gives them the much needed spotlight in the film. While he did co-write it, it's clear that he put the well being of the Muppets first. You can tell that the script was a love letter to these characters because he's enjoying every minute he shares with them. It's great to see an actor have so much fun on screen. Amy Adams is also wonderful, but she always is. She makes movies better just by being there. And also, it's great to see Chris Cooper take such a light character. Yes, he's the bad guy, but it's played for laughs a lot of the time. I especially like his song number, even if it is kind of pointless. I won't ruin it for you.

The Muppets, as far as I know, has performed decently well at the box office which is good because I think that the continuation of the franchise was dependent on how well it did. And I hope it continues to do well because it's one of the best times I've had at the movies all year. Granted, 2011 has been kind of a lackluster year for cinema, so that isn't saying too much. But still, if you love the Muppets and you haven't seen this film, I would encourage you to watch it and enjoy two hours with a few old friends. If you aren't too familiar with the Muppets... I'm actually not sure if this movie will work for you. I guess you'll have to check it out and let me know.