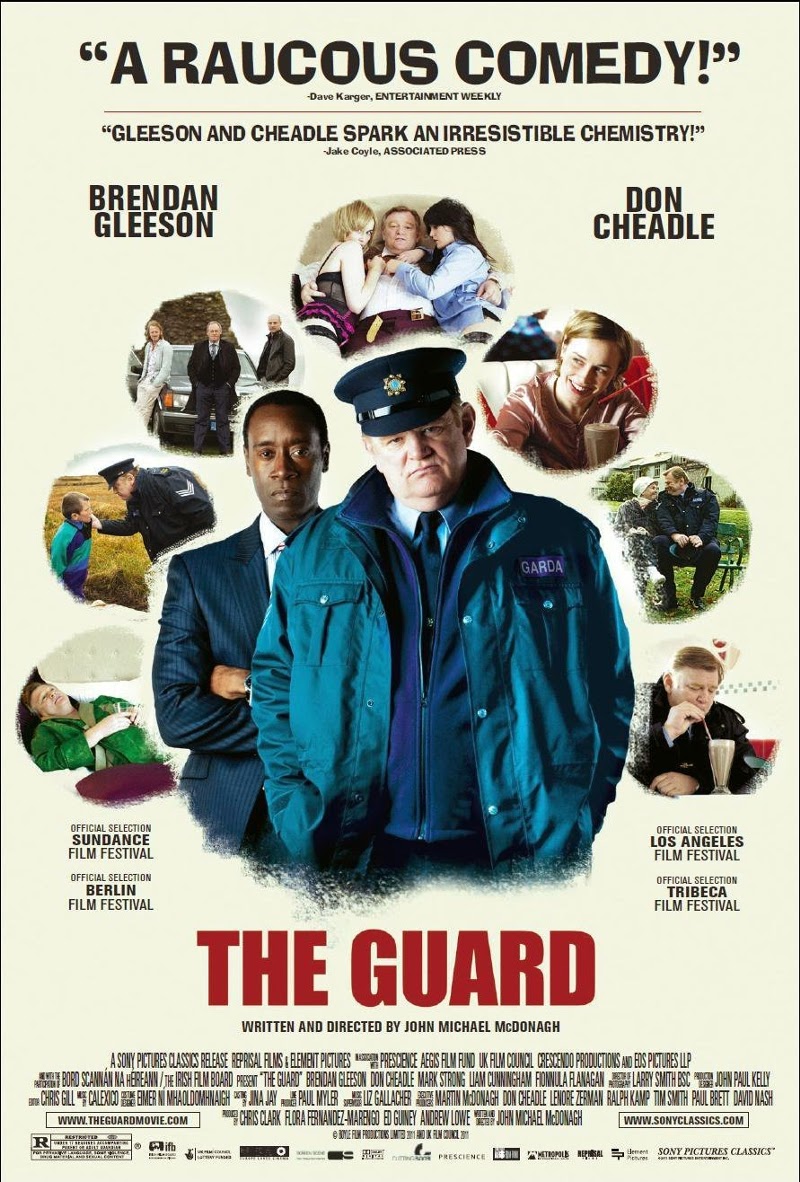 It's good to catch a film that's a little different again. Sometimes checking out independent cinema can bite, (read: Meek's Cutoff) but it can be a lot of fun to see low budget film making at work. And this one is great because it's foreign also! I think this is supposed to give me movie critic bonus points, right? The Guard is the most successful Irish independent movie in terms of box office numbers, beating out 2006's The Wind that Shakes the Barley. I don't often see Irish films making it all the way out here in Canada, but I'm glad for it this time.

Brendan Gleeson plays Boyle, a morally questionable Irish police officer who comes across a murder scene with a lot of unanswered questions. Some light starts to shine one what's going on when FBI Agent Wendell Everett (Don Cheadle) comes to the small Irish community in search of a group of four internationally infamous drug smugglers. Boyle recognizes one of them to be the murder victim and so him and Everett have to work together and have some cultural misunderstandings. Hurray!

The Guard is reminiscent of another dark comedy from the UK starring Brendan Gleeson: 2008's In Bruges, which I fell in love with when it came out in theatres a few years ago. The two stories are completely different, but there is a similar tone between them. They're both a little rough around the edges, laced heavily with profanity and featuring characters that are likeable despite not being very wholesome. In fact, Boyle is far more likeable than he has any right to be and much credit has to go to Gleeson for inserting as much charisma into the part as he did. It is an interesting character portrait we are given as Boyle does ultimately believe in true justice, but also seems bored enough with life that he's willing to bend a lot of rules for his own pleasures.

In Bruges and The Guard are also similar in that they both have a sharp and potent script. After reading more into it, it is no wonder that the tone and the wit are similar between the two films as The Guard is written and directed by John Michael McDonagh who is the brother of In Bruges' writer and director Martin McDonagh. Martin also serves as an executive producer. It's clear that they share not only a love for Brendan Gleeson, but a similar sense of humour. I know what that's like, I have brothers of my own.

The comparisons end there though because I really do feel like The Guard has an identity of its own. The story takes a lot of turns, moves at a healthy pace, taking the needed time to get to know the unique characters and situations they're in. While it is a bit gritty and dark, for the most part it continues to feel like a comedy and dodges emotional sentimentality despite a few opportunities to wander into that territory. Ad thankfully, it is actually funny. There aren't many jokes that feel forced in, but most just come naturally with the characters and how they interact. That seems to be funny enough!

Credit should also be given to Don Cheadle who makes the movie better because he's Don Cheadle. I certainly wouldn't say that this part was a stretch or a challenge for him as an actor, but I do find him naturally charismatic and able to contrast Boyle's unpredictable personality with a calm pool of sanity. Everett serves as a just character we can relate to, where Boyle is an anomaly.

While I don't recommend this for everyone, some of the subject matter might be a bit much for some tastes, I do think that it will charm others. It's a dark, quirky, comedy done in a way that is very Irish. It doesn't hide its heritage and its better off for it. It lacks a good polish, but the simple, bare-knuckle film making style does set it apart from most of the other movies out there now.