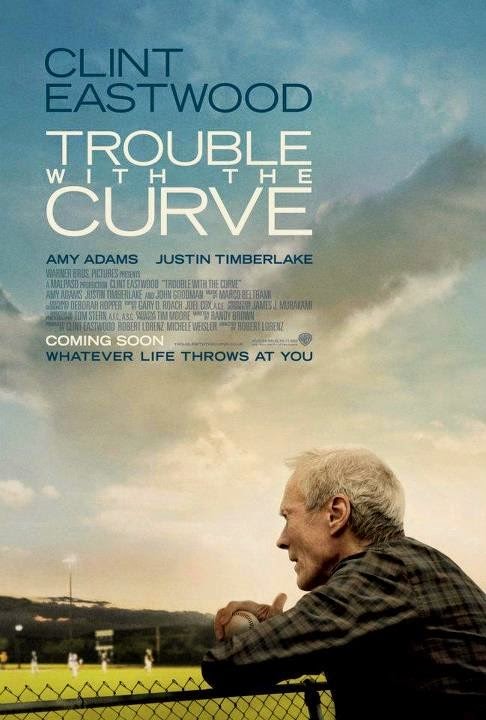 Back in 2008, the prolific actor and director Clint Eastwood announced that he was retiring from acting after starring in the film Gran Torino, which he also directed. I thought that Gran Torino was a great film and I was comfortable having that be his final acting role after a long career. Besides, he would continue to direct movies which he is arguably even better at. But then, seemingly out of nowhere, Clint returns in front of the camera with Trouble With The Curve, which is also the first movie that he's starred in that he hasn't directed himself since 1993's In the Line of Fire by Wolfgang Peterson. Seemed a little strange to me, I mean, it's a baseball movie. Maybe Clint is a big baseball fan? The ingredients seemed right anyway. The cast looked appealing enough, boasting talents such as Robert Patrick, Amy Adams, and John Goodman. And it even has Justin Timberlake, who I am a fan of these days, specifically in the acting department.

Trouble with the Curve follows an ageing baseball scout, Gus (Clint Eastwood) who has given his whole life to the profession and perhaps didn't give his daughter Mickey (Amy Adams) the attention she wanted or deserved. That's okay because she's doing very well at her law firm and might make partner very soon. Unfortunately, Gus is having a tough time with his eye sight and can't see the game quite like he used to. Gus' long time friend and boss Pete (John Goodman) calls to Mickey to help Gus out and come out to North Carolina to keep an eye out on him and for him because there is a rising star who the big leagues are eager to pick up. Gus, of course, is old and reluctant to accept her help.

I went in with hopeful expectations because the trailer made it look like it could be a very good film but I think that it must have captured the best bits because the problems of the movie became painfully apparent quite quickly. Have you ever read a script written by a high school student, where everything that is said is pretty much what the story needs to have said? As if the characters just sort of say what it is that's on their mind and there is no character or personality put into the dialogue... this script it a little bit like that. It's all so flat and uninspired. Jokes are placed where the writer was like 'this scene could use a joke,' but he didn't really know how to get it in there. As such, they don't take off. And when you write dialogue that feels artificial, it usually damages the performances. I would say that this is the case with Trouble with the Curve.

Despite the obvious talent in the film, there are no outstanding performances. The best we get is Timberlake, strangely enough. John Goodman is normally great, but it really feels like he called this one in. Amy Adams is a fine actress, but she seems to struggle with the flat script she is given. Normally she can charm her way through any role and she manages to do that some of the time, but she isn't a miracle worker. Clint Eastwood on the other hand, seems to really believe in everything he's saying and it still manages to sound bad half the time. I'm starting to wonder about Clint and if he still has it all together. While he didn't write or direct it, he had producing credit and the director is Robert Lorenz, who is only known for producing with Eastwood on most of his movies over the last two decades. So, it feels like Clint is pulling the strings here. So... why couldn't somebody tell him that it was a bad idea to sing “You Are My Sunshine?!” Perhaps it was the same person who forgot to tell him that he shouldn't yell at an empty chair for 20 minutes. Poor Clint.

And while the film seemed competently made enough, the story definitely seemed pretty predictable. Gus is out scouting this new hot shot ball player who hits everything thrown at him out of the park and the problem is that he is painted as such a detestable character the moment we see him that it is obvious how his story is going to end. I pegged it the moment that the peanut kid threw him a pack of peanuts. I knew that they were both going to play a part in his undoing. It didn't come across as very genuine, but rather a paint by numbers approach to film making.

Should you see this movie? If you want. You could do worse, but you could also do better. If you've been dying to see Eastwood back on screen, you might be just as puzzled as me as to why this was his comeback picture. And I wouldn't say this is a horrible movie, just uninspired and incomplete. It feels like they shot the picture on its second draft, when the script needed a few more heavy rewrites, if not just to give the dialogue more flavour. The contrivances might be forgiveable if there was more personality in the picture. As it is, it just feels like Eastwood trying to tell us that we can't rely on technology to do the job as well as he can...