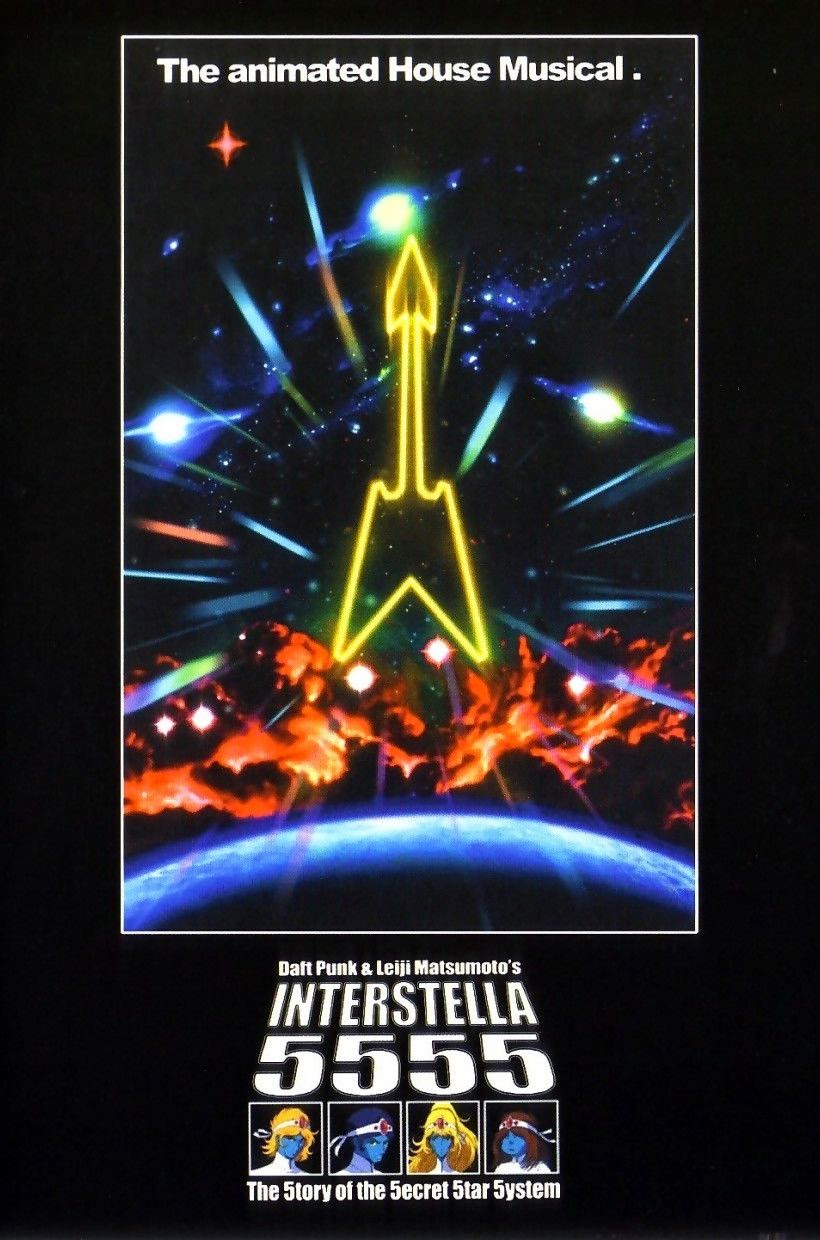 Daft Punk's Discovery was a remarkable album, but even before its completion, the duo were interested in making a companion film for it. In 2000 they approached their childhood hero and acclaimed Anime animator Leiji Matsumoto to make a musical science fiction film to the music of their album. He must have liked their story and ambition because production began that October and finally finished in 2003. Interstella 5555 has no dialogue and minimal sound effects, playing entirely as a visual companion to Discovery.

It starts with a large concert on another planet with a dazzling pop band playing “One More Time.” The crowd loves them, but so does someone else. A spaceship just entered the system and is monitoring their concert. It sends troops down to capture the pop group and take them away to have their memories wiped and their appearance changed so that they look human. He called them The Crescendolls. Their home planet is not without a rescue plan as they contact a hero, Captain Shep, with a guitar space ship who is a big fan of the band, particularly of their female bass player. He follows their captors to the planet Earth, where an evil mastermind takes the band and song “One More Time” up the charts... for evil!

The footage of this film was used as the music videos for the singles released from this album. At the time, I wasn't aware that there was a whole film made (or being made) and just thought that having a couple of Anime videos with a connecting story line was a fun idea. I was excited to learn that it was in fact a feature film, which left me more satisfied given that the music videos left it very incomplete. So, essentially this film is an album length music video, but I do feel that it works as a piece of cinema also.

One has to respect the ambition of the project; to tell a story without the aid of dialogue. It's a chance for animators to explore film as an entirely visual medium. And it succeeds at this. The story is very clear and often scenes match the tone of the music that it's playing along to. I hadn't seen the movie until a few years after I knew the album so it was interesting hearing it with a completely different context than I was used to. They allowed the mood of the music to be part of the story telling process. It never felt like the visuals and the audio were separate entities and didn't belong together. It was essential for the movie to work at all.

In a sense, it is an animated silent movie. It actually fits some of the criteria of the old silent films. A lot of the action is exaggerated as it delves into melodrama on many occasions. The characters are also very large and full of personality, with the exception of the main band who don't seem to possess particularly memorable character traits... which is strange because the film revolves around them. Many others, you can tell what kind of character they are simply by looking at them. They are designed to look evil, or caring, or heroic and often it works quite well.

Visually, the Interstella 5555 is great. The animation is beautiful and there are some amazing space sequences which would be great to have seen on the big screen. I don't believe that the movie ever got a theatrical release, which is understandable as I don't see it having an appeal to anyone beyond animation enthusiasts or Daft Punk fans.

Though the restrictions of the film are what define it and make it stand out, at times they really do feel like restrictions. The story often unfolds at a healthy pace, but at times you can sense that sequences end too soon or go on too long depending on the song it is attached to. For example, the song “Too Long” again proves to be just as its title promises. The conclusion of the movie overstays its welcome and you can sense that they weren't sure what else to do. So, they resort to recapping the entire movie, which is a complete waste of time and insulting to anyone who already watched it. I really don't like it when movies do that, but this time I can at least understand the motive behind it.

You really get the sense when watching Interstella 5555 that it really meant a lot to the people who made it. For Daft Punk, it was a dream come true. I'm glad that it was made and can be shared with their fans. I just like the concept of the film and am glad that I bought it. It's great to see a project like this. It's something a little different for someone who wants unconventional story telling paired with awesome music.