The Five Worst Movies I Have Ever Seen

Quite a few months ago, my brother Steve Ferguson wrote a list of the five worst movies he's ever seen. Now, I've seen a whole lot of bad movies in my time, probably more than the average person because most people are smart enough to stumble upon bad movies by accident. I tend to seek them out and make a fun habit out of mocking them. There are bad movies that work in a strange way because they're fun and cheesy. It can be great watching a film maker try so hard and fail... or try so hard to fail. But sometimes... sometimes the experience of watching a movie can just be so painful that you wish you did something way more productive with your time. I mean, why would you watch a movie that bad when the bathtub needs a good scrubbing?

This is my list of the most unbearable films that I sat through and really wish I didn't. I had seen a lot of the movies on Steve's list, but I'm choosing a whole different five because... well, there isn't that much more to say about BloodRayne 2 and I'd rather not remember that night. Besides, I have enough demons of my own to exorcise. So, here are the five worst movies I have ever seen. 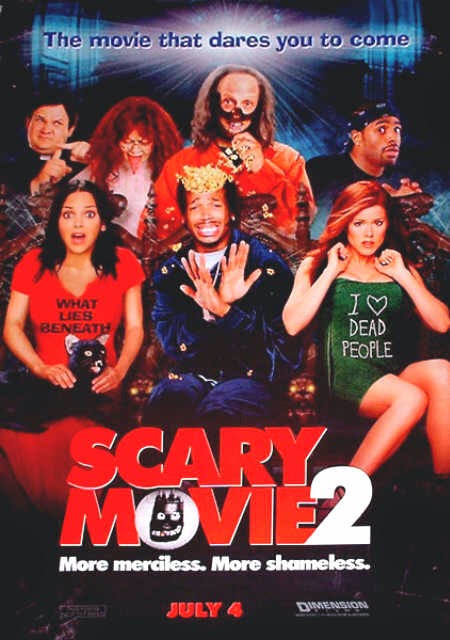 I can't even really remember what the actual story of this movie was. I don't even know if there really was anything cohesive that could be called a story. I remember a bunch of scenes parodying The Exorcist... because that's funny and in good taste!

The Wayans brothers are some of the worst film makers out there right now. They make films full of horrible, lowest common denominator humour that falls flat on its face at every punchline. They made the first Scary Movie, which was massively successful despite being absolutely terrible, and then they followed it up with this one which is completely unwatchable. Literally unwatchable. I never finished the movie. First, my friend, who will remain nameless, insisted that we watch it despite my pleading not to and then about half way through I told him that I was unwilling to finish it and we left it at that. Now you're going to say “Hey! That's not fair! You can't put this on the list because you didn't see it to the end!” Yeah, well shut it. I've sat through more hours crappy cinema than my fair share and I retain the right to leave a movie or two. Considering the garbage I've survived through, the fact that I refused to watch this speaks for itself. You see, making a bad horror movie isn't so bad because often it can be accidentally funny and still entertaining. But if you make a bad comedy, you've got nothing.

The Scary Movie films became a pretty big franchise after this, but thankfully the Wayans left them and the remaining films would only be mostly unbearable. I actually didn't hate Scary Movie 3. I didn't like it, but I could sit through it and even chuckle once or twice. 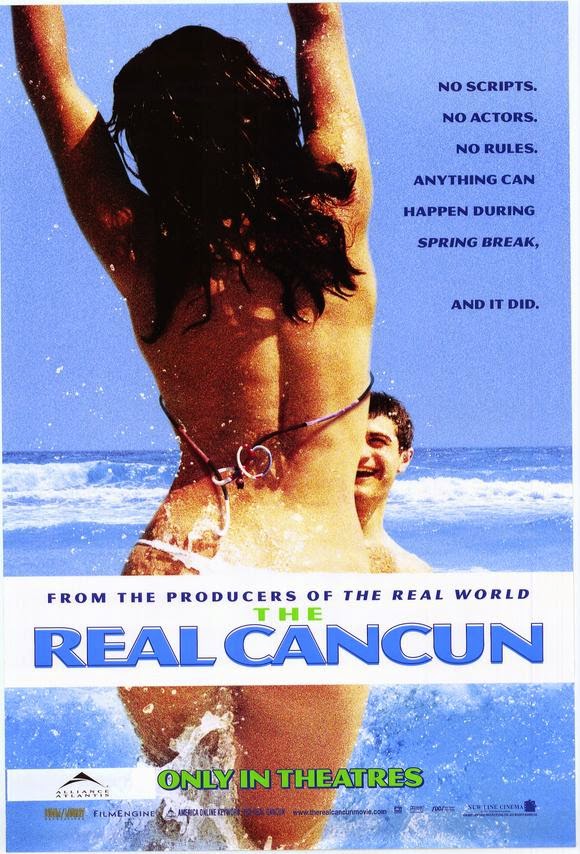 Some of these movies are embarrassing to admit that I actually watched them. The Real Cancun not only is a really bad movie, but it actually brings me back to a shameful time of my life. I was a teenager and sometimes it feels like a long time ago. And sometimes it feels like it hasn't been nearly long enough. A friend of mine rented this one night because I was sleeping over at his place and we were looking for a movie with ample nudity in it because, like I said, we were teenagers. That being said, we don't nearly have as much to be ashamed of as the people who made this movie.

The Real Cancun is about a group of strangers who are brought to a resort in Cancun to get to know each other and party for Spring Break. Yippee. And that's about it. It's a long and boring film about people who are having more fun than anyone who was stupid enough to watch the movie. And you get to see guys who are clearly there trying their hardest to get laid and often failing. They aren't actors and as such, they lack the charisma and presence of actors. And they're not even really interesting people. They are people acting like they're cool because they want to have sex. No one is real, despite the title. Imagine that.

Is there nudity in it? Well, yes. Just one scene. There is a wet t-shirt contest which somehow turns into a strip show. And... even as teenagers it felt too pathetic to rewind the scene over and over again for bare breasts. It's just not worth it. We knew it then and I'll tell you now. The Real Cancun is a portrait of selfish, unintelligent people who have nothing better to do than get wasted, talk trash about one another, and fruitlessly pursue sexual encounters with the other trash talking, drunk, horny people around them. It's pathetic and I felt pathetic watching it.

You know, looking back, I think we fast forwarded through a good portion of the movie after realizing it wouldn't get better. Maybe we had some sense after all. 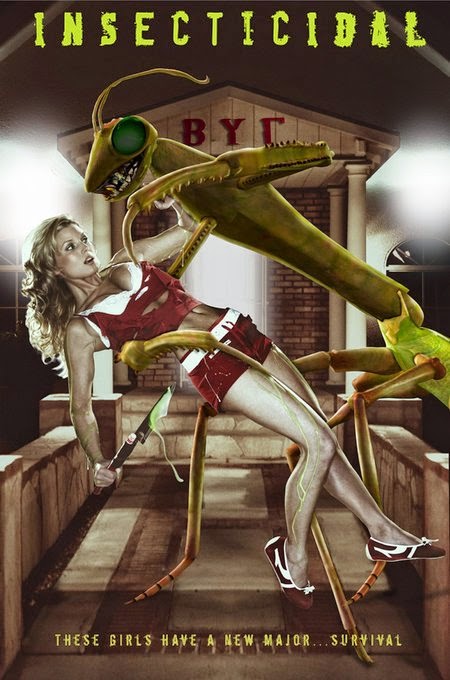 Where did I dig this obscure piece of garbage from? Well, back when video rental stores existed, they were the main source for finding obscure, low-budget, straight to DVD nonsense, just like Insecticidal. And sometimes curiosity got the best of me... I mean, how does one turn down the chance to see a cheesy b-film about a smart sorority girl who is experimenting on insects and accidentally turns them giant and man-eating? Happens to everyone, right? Sorority girls and giant insects! How could it go wrong?

There is always a way. Sometimes even when you're looking to laugh at how bad something is, you can be disappointed. This movie transcends being bad enough to laugh at and just wound up being unbearable to watch. It completely ruined an evening of laughter and mockery by just being so consistently boring and uneventful that you might as well watch the TV when it's off. At least kill the characters off in an amusing way or something. Have a sense of humour! When making a giant bug movie, make it a little fun!

And yes, the bugs were horrible CGI. I can't help but feel that this movie would have greatly been improved if they put together elaborate, but goofy insect costumes. That would have been worth watching and then we would have at least known that the director knew what kind of movie he was making. At least he went on to make the masterpiece Decoys 2: Alien Seduction. I'm just kidding, that was terrible too. 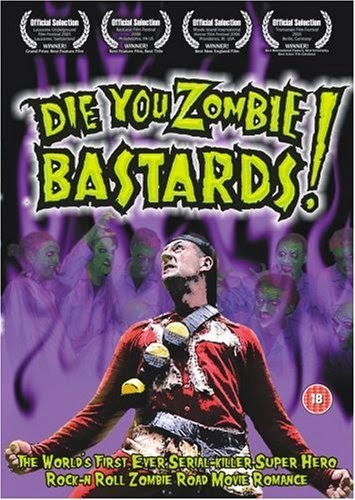 This is one of those cases where I really should have done more homework before renting and watching a movie, especially with friends. You shouldn't be fooled by the catchy title. You know you've really stumbled across something really horrendous when about 20 minutes in you start to get too embarrassed to continue. My b-movie nights can be a bit of a gamble sometimes, but very rarely do we get a movie bad enough that we unanimously agree to stop watching.

But what makes Die Your Zombie Bastards! so bad was not that it was boring, like Insecticidal, but rather that it was so mean spirited and depraved. They were trying to have fun with it, but with every frame it became more and more clear that the film makers are so unbelievably juvenile that the movie couldn't even appeal to their mother. It's just a continuous stream of penis jokes and... no, that's about it. It's immature, insulting, and entirely inept. From a film making standpoint, it's incompetent. The story is paper thin, pointless, and they can't even focus on it. Half the time, I didn't really know what was going on, but I didn't feel overly compelled to try and catch up. It takes a strange amount of time on several gag segments, which serve no purpose and are simply not funny. And you know what? There aren't even really any actual zombies in it. Yeah, there are some ugly creatures, but no zombies that I am familiar with.

This is the cinematic equivalent of a stranger pulling his penis out of his pants and asking you to touch it before snickering and running away. If you watch this movie you are a victim and should report it to the proper authorities. And most of all, don't blame yourself. We'll find these guys and make them pay.

I would also like to take this opportunity to formally apologize to those friends of mine who I unknowingly subjected to this. I hope you'll all forgive me and I promise I will look more into movies for b-movie night and not be lured by a catchy title. I'm not joking. I really honestly feel horrible about it. 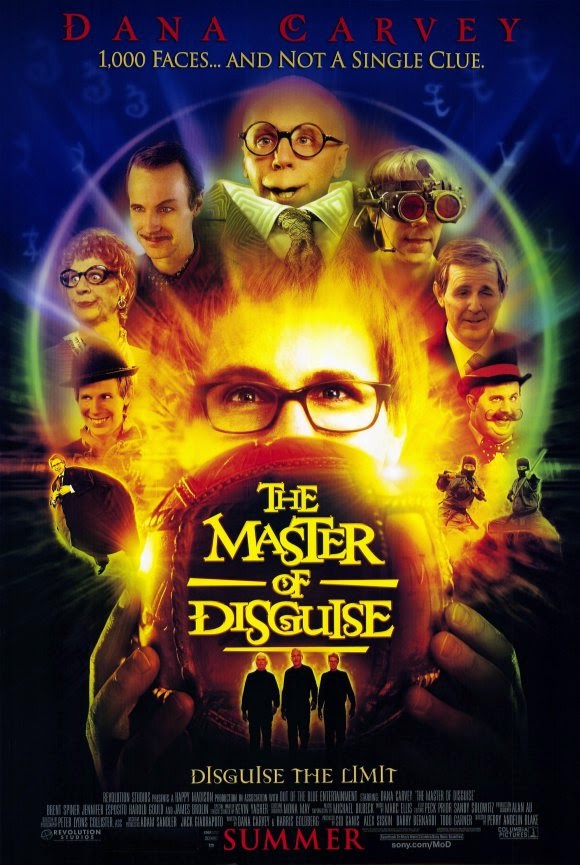 Dana Carvey, Garth from Wayne's World, doing countless impressions and taking on creative characters? Well, that sounds like it could be tons of fun! Carvey plays Pistachio, a young waiter who, when his parents are kidnapped, learns he has the ability to disguise himself as anyone because... otherwise you wouldn't have a premise for the movie. And so he goes to find them by disguising himself? You know, I was going to say that the idea had some potential, but I'm not actually certain that it does. It actually seems like a pretty shallow concept for a movie. The Master of Disguise is such a legendary bad movie and bomb that Dana Carvey pretty much never worked again. And the director never made anything again, but would only serve as a production designer to countless Adam Sandler films. Eh, it's a living.

So, since at this point you know what this list is, I'm pretty much telling you that the movie is just as bad as everyone says it is. If you haven't seen it for yourself, count yourself lucky. I'm having a tough time explaining what it is that makes The Master of Disguise the kind of train wreck that most filmmakers have only had nightmares about. I think when it comes down to it, it's just unbelievably stupid. It looks, sounds, and feels just completely moronic. Their example of a punchline is when the villain laughs he farts. Oh Brent Spiner... you could do so much better. Or there is a scene where Pistachio infiltrates a turtle club, whatever that is. And there is a misunderstanding and so he dresses up like, get this, a turtle! Oh! Hahahahaha! Get it? Yeah, I don't really either. And then there is the most bizarre moment in that very scene where he bites someone's nose clean off and then spits it back on their face. Apparently that can happen without any sort of horrific consequence. Though, come to think of it, if he bit the guy's nose and it squirted out blood like the Penguin did in Batman Returns, then this might have made it into my five favourite movies list, just for the complete shock that would be. Alas, we can only dream.

As it is, we are just left with a movie that is so void of laughs and any form of entertainment that it's considered one of the less humane ways of executing prisoners in Texas.