Belleville Rendez-vous (The Triplets of Belleville) (2003) 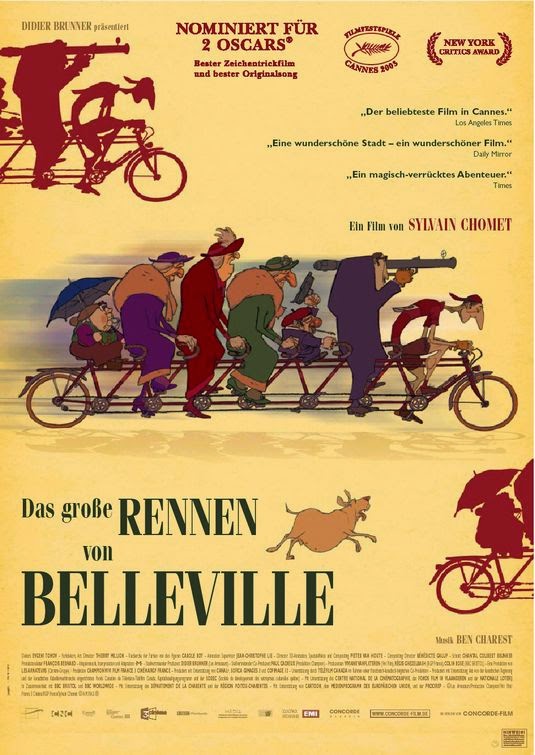 There is so much emphasis these days on computer animated films that I think we sometimes forget that the old school 2D animation is just as legitimate an art form and still has a lot to offer the film medium. The problem is that these days, it's just not as marketable as it used to be. Pixar and Dreamworks changed the game last decade and the masses just weren't coming out to see 2D films, at least not the extend that they were coming to see their 3D animated counterparts. So, this leaves traditional animation a chance to take it to the fringe. The Triplets of Belleville was a co-production between a number of film companies in France, Belgium, the United Kingdom and Canada, making it an achievement on an international level, though writer and director Sylvain Chomet is French.

It follows Madame Souza, an old lady who is raising her grandson Champion. She can't help but notice that the young Champion is unhappy, so she tries to cheer him up by buying him a puppy named Bruno. Champion goes on being depressed, but finally Souza finds out his passion. He loves bikes. So, she buys him one and right away he is overjoyed. Fast forward to a number of years later and Champion is now a professional cyclist and Souza is his coach. He enters the Tour de France and during the competition, Champion and two other cyclists are taken away by a two mysterious men in suits and are taken to America. Souza hasn't given up though. She and Bruno are tracking them down and will bring him back home again.

The Triplets of Belleville is so bizarre a film that I really didn't enjoy it at first. Something about the whole art style and tone of the film is so out of the ordinary that it's a bit off putting. But I went in having no idea what to expect. But what started off as discomfort soon became a charmed admiration for the bold, artistic storytelling that this film provided. It just took a brief period of adjustment.

The look of the movie is so unusual; the character designs are exaggerated to the point of hilarity and there is a strange twist to the laws of physics that wouldn't work outside of an animated world. But the events of the film itself are outlandish enough that not only does it warrant such a strange visual style, but I would say that the two are vital to one another. It's clear that Sylvain Chomet had a bizarre vision and took the needed time to flesh it out.

Another thing that makes this movie unique is that it's almost a silent movie. It has a full array of sound effects and a music score, but the dialogue is pretty sparse. There are a few select moments with talking, but for the most part they tell the story visually which adds to the strange tone established by the action. The lack of dialogue actually really adds to the affect of the film overall. It allows the audience to focus on the art and enjoy all of the expression that shines through it. I think every so often we need to be reminded that film is a visual medium and often we equate good and bad writing by the quality of the dialogue. That can be a good indicator, but I think we forget that creating the story is part of the writing process and to write a script devoid of dialogue is a monumental challenge. Similarly, translating that script into a visual medium, the director's job, can be very challenging also. Never mind the fact that it's animated. I have no idea how to direct animation. Wasn't my field, but I'd love to try one day.

The characters are strange and quirky, but in such a way that it's almost realistic. It's a strange balance they have. You see some of their quirks and it's so strange that you can't believe it's true, but when you think about it more, it is just strange enough that it could just be an exaggerated truth. Perhaps Chomet did know an old lady or two who captured frogs to eat? I bet he knew a dog who barked at every single train that ran by its house. It's very compelling to see truth in such a strange fairy tale. Even if everything is fabricated, it is still a story told with such confidence and conviction that you accept what you see. As I did, I really started to have a lot of fun with it.

The more this movie sits with me, the more my enthusiasm for it grows. It's a refreshing change of pace from the normal animated fare that goes through cinemas these days. It's a chance to see a unique and twisted vision from an artist who clearly cares about his work and isn't afraid to have fun. The Triplets of Belleville got a fair bit of recognition from critics when it came out and also was nominated for an Oscar, but lost to Finding Nemo. So it goes. It certainly goes to show that there is still room in this world for 2D animation and as long as there are creative minds like this behind the pencils, I will gladly support it.