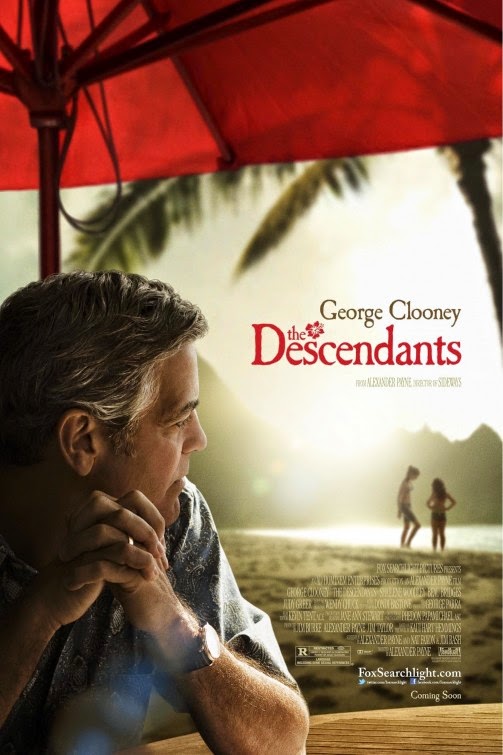 One of the titles that keeps appearing this award season is The Descendants, which I knew very little about before I went to see it. I hadn't even seen the trailer or read the plot synopsis. All I knew was that it came with a lot of buzz, particularly surrounding George Clooney's performance, where he is a top contender for the Oscar gold. What I enjoy about going into a movie blind is that I get to be surprised by everything that happens. I get to experience the events as the characters do.

It follows Matt King (George Clooney), a lawyer who lives in Honolulu, whose family owns a 25,000 acres strip of land in Kauai, which is untouched by the public. He is the sole trustee of the piece of land and his family and he need to make a decision as to if they should sell the land and who to because the trust will expire in seven years. But Matt is now going through some personal troubles as his wife is in a boating accident which puts her into a coma.

The film is an exploration of the false notion of perfection. The movie is a tale of heartbreak and broken families, but takes place on a part of the world that is considered by many to be a paradise. Matt King has the illusion of a normal family, a wife and two children, but underneath that there are lies and hurting also. It paints him as a normal man, though he is wealthy, intelligent and handsome. It doesn't take long before the movie shatters our idea of what a dream life is and shows much of it to be a burden rather than a goal. It's about the inescapable fact that all of us are human and will experience pain in our lives. Interesting how a movie about there being no such thing as perfection and success is actually a comedy at heart. I guess it is true that there is a fine line between tragedy and comedy.

Director Alexander Payne has a talent for delving into the deeper emotions of his characters, while still maintaining a relatively light tone in his films. I saw his film About Schmidt a few years ago and wasn't too into it when I thought it was a comedy. However, once I realized that it was a light, yet tragic, character portrait, I began to appreciate it more. The Descendants feels more sure footed, both having a better grip on the emotional pains of Matt King and a firm grasp on the comedy of the situations. He allows for all the characters to have real personalities, no matter how small their part. Certain people are crucial to the movie and may only have one scene, but that doesn't make that one scene of theirs without opportunity to shine as an actor. Matthew Lillard , for example, has a very small role in the movie, but it's the most realistic performance I've seen of his.

George Clooney is as good as they say, and I would call this his best performance I've seen. I thought he was quite good in Up In The Air, but I think in The Descendants he has a greater emotional landscape to work with. We get a chance to see him really perform. I know a lot of people criticize Clooney for never really breaking from his normal persona, but I think that we forget that you don't need to be an outlandish character actor to give strong performances. All we really needed from him in this movie was reality and that's what we got. Not everyone can do what Johnny Depp does, and not everyone should. Though... Clooney certainly did have a twitchy change of face in Burn After Reading, but that's neither here nor there.

Often if characters get stuck with the title of comic relief, that is how you define them and they kind of lose their chance for any sort of depth. This isn't so much the case in The Descendants. We're given a character by the name of Sid, whose very presence at times comes across as a punchline. Thankfully, Payne knows to treat Sid better than that and acknowledge that he is a character too. As we watch the movie, we find that there is more to him than the shallow person that we were quick to judge when he first enters Matt King's life.

I enjoyed The Descendants thoroughly because of how it seems so unambitious, yet achieves so much just by having a good head on its shoulders. It knows how to balance humour and heart and believes that the story is worth telling because it's a human one. And that's where the meat of the story is and why audiences will connect with the movie. Despite the location being exotic and beautiful beyond reality, the people in the movie are grounded and relatable, allowing us to share in Matt King's pain, but also in the moments in between where he and his family connect. And I think that's one of the gifts that film provides for us. They started off as strangers, but by the end I felt like they were friends.