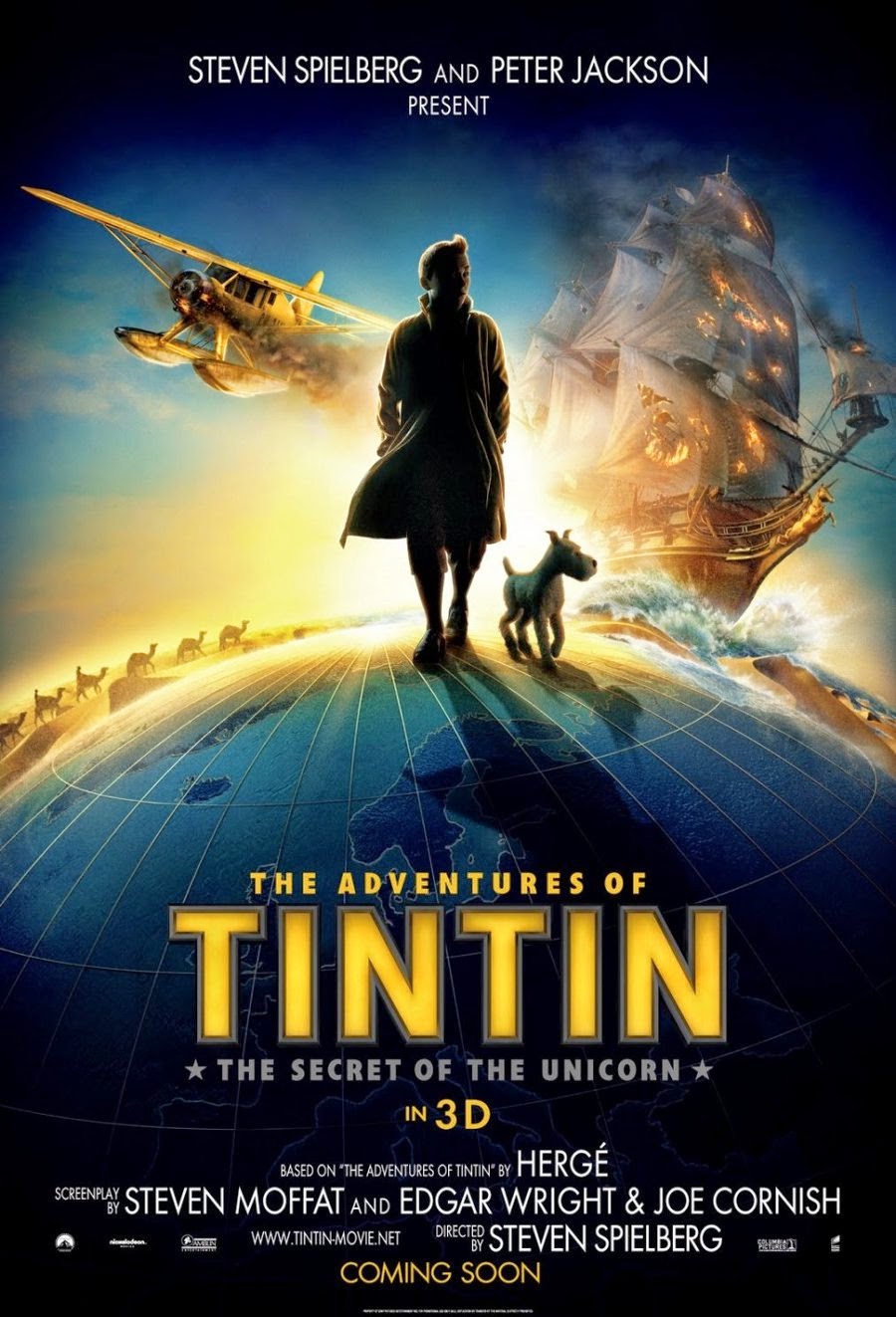 Back in 1981, Steven Spielberg made a film called Raiders of the Lost Arc, which was a huge success. Someone told him that the movie reminded them of The Adventures of Tintin, a popular French comic series. Spielberg hadn't heard of it, but looked into it and started reading them. They really captured his imagination and one day he hoped to make a Tintin movie himself. Of course, sometimes it takes a long time for a dream to come to fruition, even if you're one of the biggest directors in the world. Though, sometimes it seems that the wait is well worth it. This is one of those cases.

The film starts with Tintin, a journalist who comes across a beautiful model ship that begins to attract attention the moment he buys it. A strange American man warns him of great danger and he gets approached by Mr. Sakharine, who expresses great interest in the boat, though his intentions remain unclear. When Tintin goes out, the boat is stolen from his place, though he unknowingly removed the actual item of value: a small scroll with a cryptic poem on it. While investigating, misfortune follows Tintin, as a man is shot outside of his door and he winds up getting captured by Sakharine's goons. But as he escapes he meets up with Captain Haddock, a drunk sailor with a hazy history. All Tintin knows is that he's connected to the scroll somehow and he's their best chance of finding out the secrets that it keeps.

When one goes to see a movie directed by Steven Spielberg, there are expectations that come with his name. He's a director who has earned a reputation over his prolific career. I don't think I've seen a movie of his that I haven't enjoyed to some extent. Some I like more than others of course, but I don't know if I've seen a movie of his that is a complete dud. And of course, his great ones are masterpieces. But this project seemed special because of the talent brought on board to aid him. First, he co-produces it with Peter Jackson, the New Zealand born film maker responsible for bringing The Lord of the Rings to the big screen and who made an outstanding King Kong remake. Not only that, but the screenplay was written by Shaun of the Dead and Hot Fuzz's Edgar Wright along side Dr. Who's Steve Moffat and Attack The Block's Joe Cornish.

I believe that it's a good thing that the movie took as long as it did to get off the ground. Had a Tintin movie been made ten years ago, or even five years ago, I imagine that it would have been a very different product than it is now. One of the most obvious aspects that stands out in this film is the visual style. Spielberg uses the performance capture technology that Robert Zemeckis used for The Polar Express and other films. Though this style has not been overly popular with mainstream audiences due to the people looking “creepy,” The Adventures of Tintin uses it in a different way that winds up being a strength of the film. Spielberg was smart to stay true to the popular character designs of the comic book. This means that no one looked like the actor portraying them and often didn't look like a realistic human, perhaps with the exception of Tintin himself. Though, Tintin looks a like an adolescent. I don't mind too much because there is a great line to poke fun at this. The rest of the people have exaggerated features so they seem like cartoons, but extremely realistic looking cartoons. In fact, this is probably the single most visually impressive cartoon film I have ever seen. The animation looks far better than any of Zemeckis' films, though to be fair, it is a newer film and it likely wouldn't have been possible if Zemeckis hadn't paved the way first.

Now, I suppose a Tintin movie didn't have to be animated. Perhaps not, but I think that the final product is stronger because it is. There are a number of things that were done in this movie visually that would have difficult, if not entirely impossible with real life actors. The animation is used to enhance the story. There are some very clever transitions used to tell an action filled flashback as well as an amazing one shot chase scene that would have been completely insane to try and pull off with real people. If they tried, it likely would have been mostly CGI anyway.

I think that some people might be disappointed just because of the talent on board with the film. I think it's possible that expectations might be a little too high because of the previous work of these film makers and what people think they should achieve when working together. I would argue that they do their jobs perfectly. You see, the objective of a creative team shouldn't be to create the single most amazing spectacle that anyone has ever seen. If you keep trying to do that, eventually you'll disappoint. Rather, all that they set out to do was make the best possible adaptation of Tintin that they could and I feel that they've done that. The screenplay is not a jaw-dropping work of art, but it is very tight and efficient. Though Tintin does talk to himself a fair bit in the first act, I suppose that's not too much of a stretch. I've been known to chat to myself and use a cat as an excuse. The script has humour and action and tells the story at a very healthy pace. It does its job very well.

Spielberg's job is to interpret that and translate it visually, which he has done in an extremely fluent manner. But with Jackson, he has also done in it in an extremely ambitious way. They mix classic adventure story telling with the most cutting edge visual effects in the industry today. That must be worth something, right?

Now, I'm not actually that familiar with the source material. I remember Tintin from when I was a kid because my dad enjoyed them and would share them with me, but it has been so long I don't remember any of the details. As such, I can't really tell you about the loyalty to the story or the portrayal of the characters, but I wouldn't be surprised if they were spot on. I believe that the story is a hybrid of three different Tintin stories, though you wouldn't be able to tell with how well the story flows.

Supposedly Tintin isn't as popular here in North America as it is in Europe, but I'm starting to find that difficult to believe. It seems that so many people I talk to knows the character and read the stories when they kids. Or perhaps it's the United States specifically who isn't familiar with him because we Canadians seem informed enough. Or perhaps someone is pretending to be cultured? Whatever the case, I'm glad that this team of brilliant film makers have collaborated and released this movie because I suspect that people will want to look into the comics again or for the first time. I know I'd like to rediscover them now.