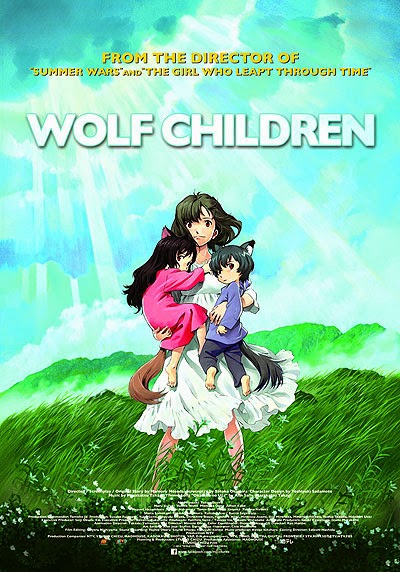 I'm not usually a big anime fan, but there are a few films that have successfully captured my imagination. I guess saying if I like or do not like anime is kind of pointless. I mean, like any medium, there is good quality work and not-so-good quality work. This year at the Vancouver International Film Festival there was an anime film, straight from Japan, called Wolf Children which was getting a fair bit of attention. I know this because the first screening I tried to see sold out so I had to wait the following week. And even though it was in the biggest house the festival had to offer the second time around, the show still had a very strong turn out and there was some competition for seating. So, I don't know what it was about this particular film that gathered so much attention, but it's safe to say that it had a strong run at VIFF this year.

The movie follows Hana as she's going to school and starts pursuing a mysterious young man, Souhei, who is fairly shy and keeps to himself. As they get to know each other, they fall in love, but he feels he needs to reveal the truth to her; he is a wolf-man. Oh man, I hate it when that happens! She accepts him regardless and they begin to start a family together. And wouldn't you know it the two kids, a girl and boy, Yuki and Ame, are part wolf and transform from human to wolf on a whim. Unfortunately, one night Souhei doesn't return home and Hana finds that he's been killed leaving her to raise her children by herself. Life in the city proves to be too risky and cramped for energetic wolf children so Hana packs up the kids and goes off into a small secluded community where she and the kids can live a life of privacy and keep their secret.

This film covers a fairly long time from before the children were born and well into their school years, so something that's worth taking note of from this movie is its pacing. That's something that a lot of movie goers don't take too much notice of until it's a problem. If a movie feels way too rushed or seems to drag, that's an issue with pacing, but here the movie takes time to breathe and contemplate, but doesn't feel like it's dragging you through a marathon. It fills out its two hour run time ideally. Had it been two short, I don't think that we would have been able to appreciate the three lead characters and their journeys the same way.

The story follows three lives. We watch the energetic Yuki and her trying to find acceptance and a place in humanity. We watch Ame being unable to find satisfaction in the human world and finding peace and purpose in the wild. But the most central story is Hana, who we see sacrifice everything in her world for her children. She is such an endearing character, but we do often see how vulnerable she is. She's not a super mom, she is just determined to make sure her kids are safe and free. And this actually winds up being her weakness, with an unwillingness to let Ame go as he grows older. This is fairly accurate to real life; often our strengths double up as our weaknesses.

“Wold Children” is beautifully animated, with gorgeous landscapes and wilderness backdrops. Even the shots of the city look great. I often find that the weakest part of Japanese animation is the people in the foreground. Everything around them is so beautiful and believable, but the way they draw people seems very trapped in the style that they've made for themselves. This is the case here, but I don't know how it can be helped. They need to meet expectations I suppose. That being said, what makes Yuki and Ame so much more interesting than the typical anime character is that you see them in various stages of transformation between human and wolf, so I guess that is something special.

Ultimately, the reason this movie works so well is that it just really is a touching and human story. I suspect that this is how many people feel, exaggerated to a degree. For example, perhaps there is a half Asian person in a mostly white community, who has trouble finding acceptance amongst their peers because they appear to be an outsider on a very surface level. Yuki's story captures that sense of isolation and distance that many people feel. Ame's story can easily be paralleled with anyone who finds no sense of belonging in the structure of modern society. He's the man who goes down the path less travelled. And also to some degree Hana is the every-mom, making sacrifices for her children, but to an extreme due to her circumstances. But the feelings are still based in truth. That being said, the film also succeeds because it is actually really funny. I think there is a lot of comedy that comes from having werewolves as children and the film makers were smart to capitalize on that. It balances out the comedy and the drama extremely well, never feeling forced or contrived. Both come naturally to serve the story.

“Wolf Children” was a pleasant surprise this year at VIFF and I recommend it for fans of animation in general. I hope you find an opportunity to check it out.