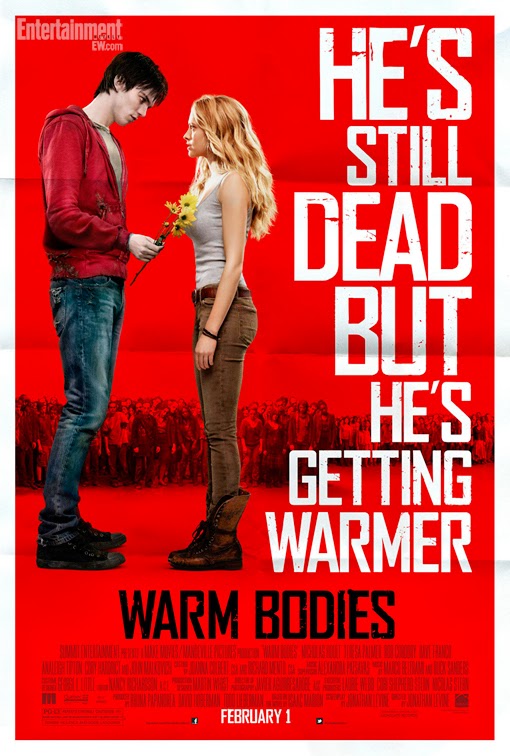 To tell you the truth, I was not at all interested in seeing Warm Bodies when I first heard the announcement of it. Their pitch was all wrong. Judging by an early poster, they seemed to be going for a Twilight follow-up, this time instead of faux-Vampires being the romantic leads, it would be zombies. The whole idea was pretty disgusting to me. Figure that, a story aimed at teens involving necrophilia didn't seem like a good idea to me. My opinion changed when I saw the trailer and heard a little bit more of the concept. First off, the trailer gave me a crucial piece of information that makes the idea a lot more palatable; Warm Bodies is a comedy. The next Twlight pitch was a big mistake, both because it is misleading and also because it is off putting. I don't see Twlight fans enjoying this one as much. It's too smart. If anything, it should have been marketed to those who like zombie movies, or at least zombie comedies such as Shawn of the Dead and Fido.

Although, if you're going to enjoy this movie, you have to be able to accept the rules of this universe which do not follow the rules of George A. Romero's zombie lore. If you can take a ride with the liberties the story takes, then you'll do just fine. I think that sort of leniency is permitted when it's a comedy. And in this case, it is something that fuels the story anyway. The story follows a zombie (Nicholas Hoult) who is trapped in his own head, bored with the redundancies of life, roaming around an airport thinking about how it's hard to think and wanting something more out of his zombie life. Well, one day a group of young humans sneak out of their protected city to get medical supplies and our zombie friend and a whole bunch of others find them and attack and feast on them. It's not that they want to, they just can't help themselves. Such is life, being a zombie. Or death I suppose. Zombies crave the brains the most because it stimulates their minds, feeding them the memories of their victims. Our lead zombie gets a chomp out of a fellow's brain and gets memories of his girlfriend Julie (Teresa Palmer), who happens to the be in the room. The zombie goes to protect her because he has fallen in love. He disguises her and brings her back to his place which is an old air plane in the abandoned airport. And they have to find a way to make nice nice while she hides to avoid getting munched on by the other zombies. Julie names the zombie R and a strange friendship is born.

Even describing the plot might sound a little stupid to some, but the way it plays out feels much more natural than it should. Much of the film's success can be credited to the lead actor Nicholas Hoult, who had his first starring role ten years ago in About A Boy as the aforementioned boy. Now he's all grown up and trying to become a movie star. To be fair, he's doing a great job. Having played young Beast in X-Men: First Class and now this film, he has some decent material on his resume. His performance of R is pretty spot on and he is clearly having fun in the part. It's a tricky thing, playing a charismatic dead person. His supporting cast is mostly good too and he works well with Teresa Palmer, who I haven't seen much of before. She reminds me of Kristin Stewart truthfully, but with more emotional range and more of a figure. As such, I like her much more. Julie is a pretty interesting character actually, and plays as much a part in the story's progression as R does. Her relationship with her father and soon-to-be ex-boyfriend is actually fairly complicated and shows that she is a young woman with a lot of courage and will power. Palmer lends a lot of credibility to the part, though I still can't imagine most women having time to make themselves look that sexy while the end of the world is upon them, but that's Hollywood for you. Gotta sell tickets somehow.

The only weak member of the cast that springs to mind is Rob Corddry who as far as I'm concerned has just struck out for me. I've seen him in three movies and in non of them have I liked his performance. I unfortunately saw portions of Harold and Kumar: Escape from Guantanamo Bay and he was infuriating in that. I know his character was supposed to be, but... no. In Hot Tub Time Machine he was easily the worst part of that movie, playing along side some other very talented actors. The problem is that he hams up his performances and nothing is believable. His comedic chops are unrefined and often tasteless. In Warm Bodies he does something very different from his previous parts and gets to play a zombie and he still doesn't sell that to me. It's strange because it's a role where exaggeration and hamming it could really work, but he just didn't sell me on the part. Every other zombie did. So... no more Rob Corddry in my diet if I can't help it.

Johnathan Levine, director of last year's superb 50/50 takes the helm of Warm Bodies and directs it more like an 80's teen romance film than a zombie film. I don't think he ever had any intention in making the next Twilight, finding far more inspiration from John Hughes and films akin to his hits. Fuelled by a touching love story and a hip soundtrack, he pairs a lot of ironic images and sounds together to create a strange atmosphere of warm cosiness, except for the portions where there are zombies trying to eat the leads. It is tense when it needs to be. But the relationship portions, which is where the heart and soul of the movie really lies, is fun and charming. I haven't read the source material, but it seems that it would be quite clever and I think this approach would do it justice.

Warm Bodies turned out to be a pretty good time. It has laughs and action and thankfully avoids the necrophilia issue. It hasn't been the huge success that I think the studio was hoping for and as such it's safe to say that it will not be the next Twilight. As such, we can call it a success for that very same reason!