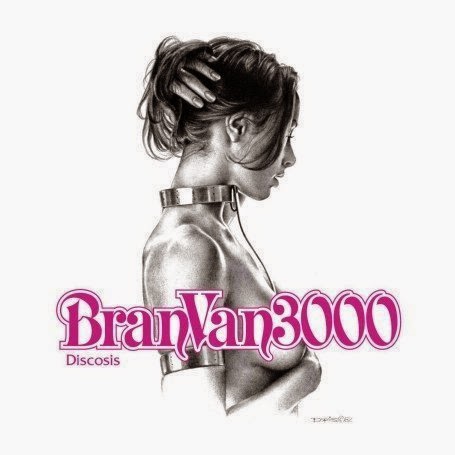 Sometimes an album resurfaces in your life out of nowhere. When it came out, I actually had no interest in picking up Bran Van 3000's Discosis because I felt kind of lukewarm about the big single from it, “Astounded”. But this Summer I stumbled upon it at a garage sale. There is was for only $2. I decided to give it a spin because... well, can't beat the price I suppose. And after listening to it a few times I found that I had a few thoughts I wanted to share about it. Because I never picked up the album those ten short years ago, it's a chance to get a fresh opinion about an album that has run its course. If you happened to pick one up, this might be a fun opportunity to dust off your CD player and give it a spin... or you know, put it in your computer.

Discosis is a brave, if not a bit strange, collection of ideas. Many of them do not work, but they are bold just the same. It's a perfect example of an album where there were perhaps too many collaborators for its own good. Canadian act Bran Van 3000 is not a band in the traditional sense, but rather a creative collective of various DJs and singers. And on top of that, more than half of the tracks feature other artists. The end result is an album without any focus packed full of 18 tracks. Many of the songs don't feel like they've been explored to their fullest, suggesting that with a little more time and this might have been much stronger.

I also feel that the album would be much stronger if they just axed a few songs. 18 tracks is a delicate balancing act and skilled artists can keep a long record from becoming tedious, but this isn't the case here. Discosis definitely overstays its welcome. If they just removed some of the weaker songs like “Loaded,” “Jean Leloup's Dirty Talk,” and “The Answer” then the album would feel more balanced. Sometime more music isn't better. Though, I don't imagine that they group is entirely aware that these songs are weaker. They're not outright terrible, but it takes more than a groovy beat to invest me in a song.

And at times it seems that the album is trying too hard to be cool. They lose some great opportunities for touching and honest songs when they force in rap breaks that conflict with the mood of the songs. Specifically, I'm talking about the song “Speed” which has some marvellous singing, but starts to lose its footing near the end while mixing some really good ideas with some bad ones. It started off with so much promise and loses some of it, but still remains one of the strongest tracks on here.

Two of the songs of note and connected directly, in that one is just a continuation of another. The first one is “Go Shoppin'” which is very strange. It's a dark dance beat paired with some goofy semi-hip-hop vocals. I didn't really think I liked it until the next song “More Shopping” starts and uses the same music but has much more appropriate vocals. And suddenly it all makes sense. It's as if the follow-up song validated the existence of the first one. Very interesting. It almost reminds me of that classic French song “Bonnie and Clyde” by Serge Gainsbourg.

There are a number of songs that really shine on the album. “Montréal” is splendid mix of acoustic guitar, spoken word singing, and a smooth dance beat. It's a slick and glossy fun track that only sometimes suffers from stupid lyrics. The second single from the album was “Love Cliché,” a throwback to classic love songs from the 50's. It's just a fun and charming exploration of innocent love. I enjoy it quite a bit. And there is also the track “Stepchild” which is a fascinating blend of jazz and world music, mixed with rock. It's a unique entity on the album, being a very aggressive and ambitious song. I recommend checking that one out.

Apart from that, the album seems frantic and confused. It's a fascinating train wreck at times, and other times it feels like there are songs that just haven't been used to their potential. Whatever the case, I respect Discosis in a weird way. It tries to hard to be “cool” but does it in such a unique way that it almost actually achieves its goal. But only almost.