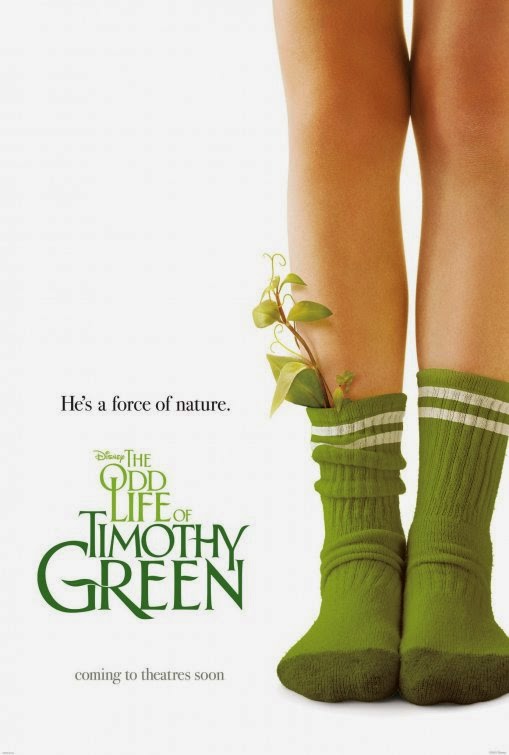 I went to my childhood theatre, Station Square 7 in Burnaby to see one last movie there before it closed its doors this Labour Day, 2012, and I had intended to see Total Recall which, despite not so great reviews, I am interested in seeing. The sad thing about theatres that are on their last legs is that they aren't being particularly well kept in their final days. As such, there were problems with the sound in Total Recall: an overpowering hum that made it unwatchable for me. But I was determined to see a movie there so I traded my ticket for the next show that was starting up and was in English. So, I watched The Odd Life of Timothy Green... which I had no idea what it was or what it was about. The only info I got was that it was a Disney family movie.

The film starts with Cindy (Jennifer Garner) and Jim (Joel Edgerton) Green, who have just gotten the news from their doctor that they won't be able to have kids. They live a humble life in the small town of Stanleyville, which is best known for its large pencil factory where they are both employed. That night, they talk about what their kid would have been like if they were able to have him, and they write down all of his qualities and put it in a box, which they bury in their garden to give their dreams a final goodbye. But that night there is a rain storm over their house and a small boy covered in dirt enters their house and calls himself Timothy (CJ Adams). He calls them Mom and Dad and they determine that he must have been sent for them to raise. Though, they can't help but notice that he has leaves growing out of his legs. No one is perfect, right? Now, how do they explain him to their friends and family and how is this brand new naive boy going to fit in with the harsh public grade school conditions?

I have to admit that under different circumstances, I probably wouldn't have watched this movie. It's generally not my cup of tea and that's to be expected; I'm not the demographic. But what I like about this movie is that it is an innocent and charming live action family movie that doesn't have the gloss of the major franchises and animated movies that are so prevalent these days. I don't dislike the animated films of today, as you might know, I review them quite often. I just don't see movies of this nature very often these days. Though, admittedly, it has a bit of an after school special feel. Writer / director Peter Hedges has had better luck before. I felt that his last feature Dan in Real Life was much stronger. His approach to minimalist film making works at times, but this time there was a bit of a prosthetic feel to the whole production.

You have to give them points for trying though. The actors, for the most part did very well. Young CJ Adams is a talented young actor, giving an honest performance. He's not a very experienced actor, this is his first lead role, but he plays a well mannered little boy very well. Ladies in the audience will think he's cute. He is cute. Joel Edgerton also gives a fine performance, giving a charming sincerity to the role. I haven't seen him in many films, but seeing him here makes me want to see films like Warrior even more, just to contrast these vastly different parts.

Not all of the performances were as inspired. The part time rapper Common was an odd choice. While I don't think that he's a bad actor, he really doesn't fit the look and feel of the film, though it did help it feel a little less white washed. I suppose the actor I had the most issues with was Jennifer Garner. I haven't really had many qualms with her acting in the past, but something about her performance in this movie seemed very artificial. It was a bit hammed up, like she knew she was in a kids movie. Strange because at times Edgerton also was hamming it up a bit, but it felt less strained with him. I hope Garner can land herself some roles that give her a chance to try a little harder in the near future.

While I admire the family friendly story telling that this movie provides, I do feel that it cuts its audience a little short in the conflict department. At no point do I wonder what's going to happen or fear for the outcome of any event... except where they try and cut his leaves off. I genuinely wondered what was going to happen in that scene. It's quite unfortunate that this leaves the film feeling a little unsatisfying and not too memorable. It's just so well intentioned though that it's hard to hate. Families will walk away satisfied enough. I walked away neither enthusiastic nor disappointed.