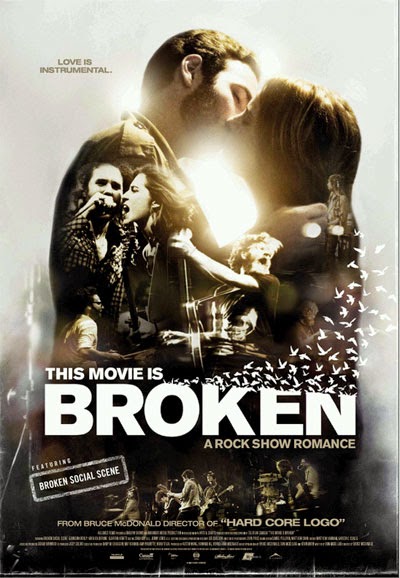 Broken Social Scene is, in my opinion, one of the finest and most important Canadian bands to emerge from the last decade. One of their biggest contributions was starting their own label Arts & Crafts, which is a consistently reliable source for quality Canadian music, even branching out and attracting some international acts such as Bloc Party and Moby. But the band apparently didn't want to stay strictly in the music business and thus we have their first film called This Movie Is Broken. The story is that Bruno (Greg Calderone) has had a crush on Caroline Rush (Georgina Reilly) and through a series of events that the film doesn't really show us or touch on, they spend the night together. Caroline is only in town for another night though because she lives in Paris and is only back for a short while. But Bruno really likes her and wants to date her seriously... oh no! But how can their love ever be?

So, how does Broken Social Scene fit into all of this? Well, the back drop of this whole movie is Toronto during a city strike in which the band plays a free show due to a cancellation of another venue. And go figure, both main characters love the band and want to see the performance. And that's about it. I suppose I shouldn't have been expecting a really great story, but I think I was still quite surprised at the lack of substance in the film. It really just feels like an overly expensive and over produced concert video. I guess it is just that.

But to be fair, it is a pretty good concert video. I would love to see Broken Social Scene live because it looks like a real party on stage. The songs that I knew were great to hear in a different context and the live renditions took some very cool creative liberties. I really enjoyed that aspect of the movie, but I'm a pretty big fan of the band. If you aren't, I can't imagine that this movie would really interest you. Some of the live stuff might win you over, but maybe an actual full concert video would serve that purpose better.

The actors they got to play the lead roles are actually pretty talented. I've seen Georgina Reilly before in the movie Pontypool, another Canadian movie I reviewed here. She seems to be fairly talented. Greg Calderone seems to do pretty well in the role of Bruno as well. I suppose the problem is that, for the most part, these parts aren't particularly demanding. The character seems pretty flat and don't really change much from the start of the movie to the finish. I guess it makes me wonder what the purpose of the story is at all.

Actually, yes, that is the main problem of this movie. I don't know what it's purpose is. I don't know what people in the film or watching the film learn from the events in the movie. Even the surprises near the end, including an unrealistic and completely unnecessary homoerotic turn in the third act. Seemed to me that with that they were going for shock value, ignoring any logical sense. I guess since the story basically has no climax, that was the closest thing they had, so to speak.

The film looks a little too “typically indie” for my tastes. There are too many long shots of the Toronto cityscape and too many awkward close ups on people's faces during dialogue. This isn't a problem so much as just a visual style that doesn't work for me personally. It looks to me like something that was either thrown together or contrived to have a look to it. Of course, all visual styles for movies are contrived because they have to be; the key is that you're supposed to make it look natural and not draw any attention to that fact.

As a big supporter of Broken Social Scene, this is a fair bit of a disappointment for me. This of course isn't the first time great musicians have dabbled in film. At least the band had sense enough to get an actual director, unlike The Flaming Lips' foolhardy science fiction effort Christmas On Mars. That one at least reflected a bit of The Flaming Lips' eccentric personality. I don't feel that This Movie is Broken feels like a movie that belongs with Broken Social Scene. I never thought of their music as particularly romantic. Nor do I find their music contrived, bland or pointless.

So... where can I get the full concert footage? I'd gladly watch that again.