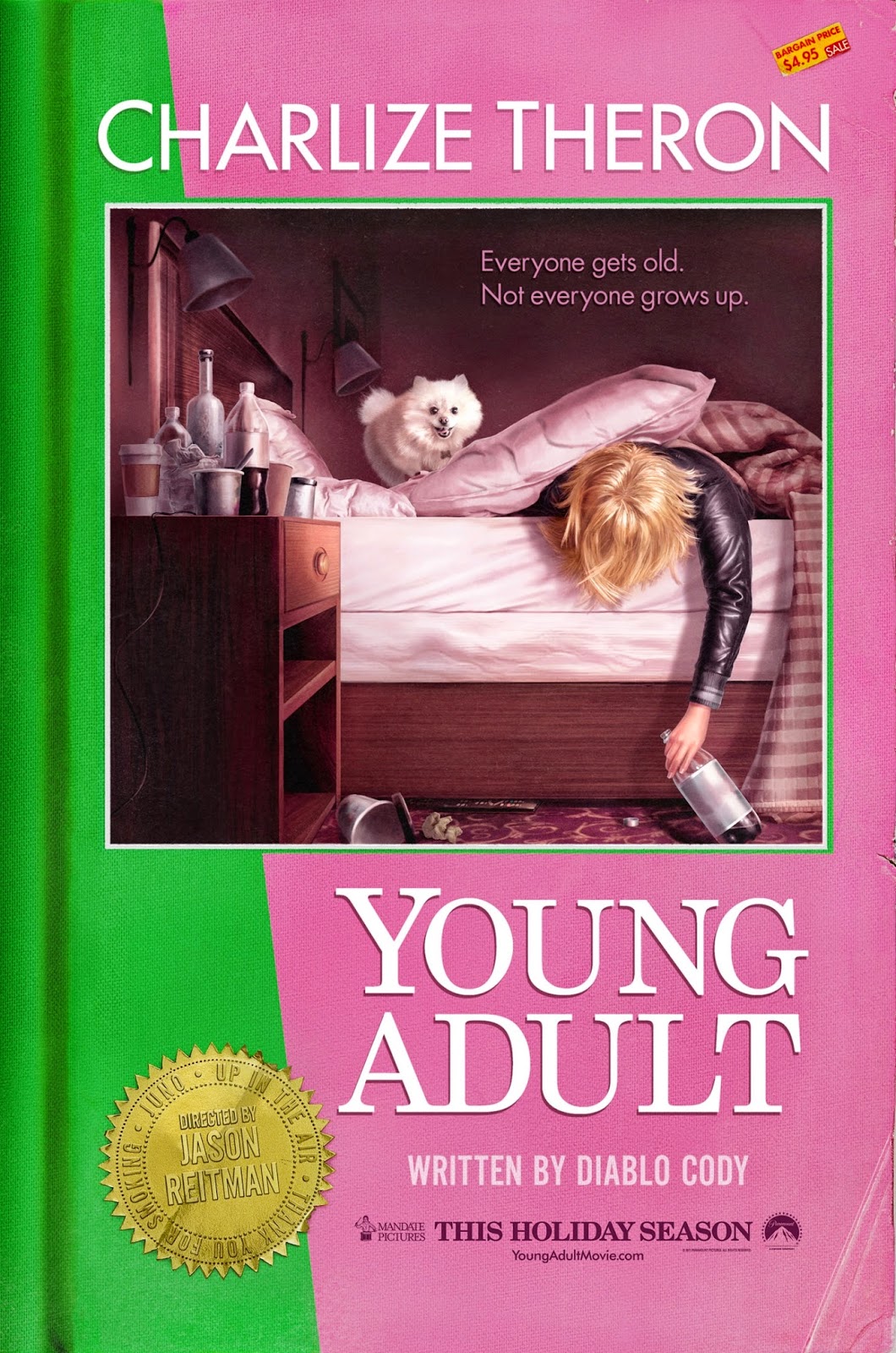 A few years ago in 2007, an independent comedy about a pregnant high school student hit the screens and took everyone by surprise. The film was called Juno and looked like one of those charming low-key comedies that finds a niche audience and comes and goes from theatres pretty fast. That wasn't what happened though. It connected with audiences in a big way and went on to gross $231 million and even earn a few Oscar nominations, winning Best Original Screenplay. Juno was a huge hit and was made for very little money so director Jason Reitman and writer Diablo Cody would go on to make some more movies with no worries. Reitman followed it up with another critically acclaimed movie that he co-wrote called Up In The Air, which also got a few Oscar nods including Best Actor for George Clooney. Diablo Cody went on to write the Megan Fox lead bomb Jennifer's Body. Cody and Reitman are now reunited and have made the film Young Adult, which doesn't focus on teens at all, but rather a generation up.

Mavis Gary (Charlize Theron) is returning to her home town. She is currently a best selling young adult fiction writer, but with her series' popularity fleeting, she finds herself seeking something else in life. She fully intends to meet up with her old high school flame, Buddy Slade (Patrick Wilson) and win his heart again. There is one problem with her plan though. Buddy is married and has a brand new baby. Yes, Mavis is aware of these issues and yes, she is going for it anyway. She also makes an unlikely friend in Matt Freehauf (Patton Oswalt), who had a locker beside her's in high school, but they were of very different crowds. Now they can connect on the one thing they have in common; they can't seem to let go of high school.

Juno was such a big hit because it really connected with a teenaged audience. Young people could understand the characters and relate to their circumstances, or at the very least, see a bit of themselves in the characters and be grateful that they weren't pregnant themselves. Young Adults is also an extremely relatable movie, but I suspect that mainstream audiences will not like it as much for that very reason. The thing is that Mavis Gary is not a particularly loveable protagonist, but she heavily represents aspects of our society. I think a lot of people will see some of themselves in her... and not like it at all. I did and it was a bit uncomfortable. Charlize Theron's performance was a frenzied balancing act of being detestable, but sympathetic. It's mesmerizing, but very challenging, not just for Theron, but the viewer as well. We're with her every step of the way, for better or for worse.

What Young Adult addresses, even in its title it seems, is the idea of our young generation being unable to grow up. Matt is a fascinating character played very well by Patton Oswalt, who is gaining a lot of credibility in my books these days. At the end of his high school years, he was attacked by a group of teens and beaten to the point where he is still unable to walk properly. He is physically handicapped because of this event. He never really moved on beyond that point in his life, and while I can't really claim to understand what kind of trauma an event like that would induce, it really doesn't look like he put up much of a fight in life. It is implied that he was very complacent about it all.

Mavis is a very different story. She moved out of the town and went onto become a writer and become the envy of everyone she left behind. Yet, she returns trying to find fulfilment in her past. She hasn't progressed any more than Matt has, despite her life taking a completely different turn. Young Adult challenges our definition of success, suggesting that perhaps it's not actions, a location or even career paths that can properly define who you are, but that there is something more significant in our culture that is lacking. It doesn't try to force an answer upon us, but takes a long hard look at some subjects of this disease. Our generation is certainly very nostalgic, which isn't inherently wrong, but it can sometimes keep one from looking forward in life.

Canada born Jason Reitman is proving himself to be one of the finest young directors of our time. He is a master of understatement, extracting great work out of his actors and finding simple stories that have a lot to say through very real characters battling with relatable problems. He finds the humanity in the art of film, balancing humour and emotion, coming out with a genuinely good product. Young Adult is his fourth feature film and all of his strengths as a director are present and accounted for. He maintains a fair bit of tension in scenes because there are so many questions unanswered. He allows us to wonder and doubt, revealing specific bits of information only when they need to be revealed. It's quite well done, especially for a dialogue driven film. So, of course, credit should be given to Diablo Cody as well. It's great to see that she isn't a one trick pony and could speak to more than one age group.

Young Adult isn't a feel good love story, but rather a comedic tragedy and telling tale of our time. I don't mean to scare you away from it, because, while it is kind of a difficult film to process, most of my musings came as an after thought. While watching the film, I was entertained. I laughed and got invested in the story as it came. The truths of this movie unravel slowly, which is great because it gives us some time to enjoy it first.