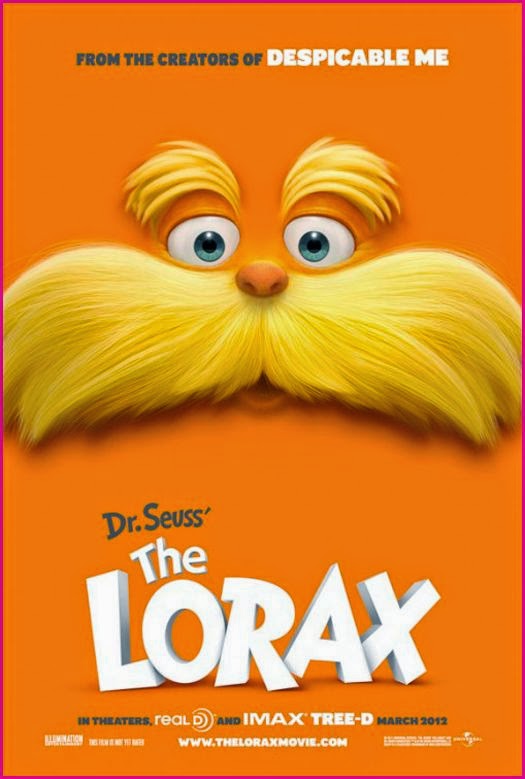 Illumination Entertainment, the creative team behind Despicable Me, are waging an animation war against the two leader's of the battle, Pixar and Dreamworks. Indeed Despicable Me was a huge hit, but their follow up film Hop, was a bit of a dud. So, their next strategic move was to adapt an already well known source material, the classic Dr. Suess book The Lorax. It worked for Blue Sky Entertainment who made the animated Horton Hears a Who! a few years ago. This is a smart move on Illumination's part for a number of reasons. First, because it has an established fan base, kids are more likely to go see it. Not only that, but the Dr. Suess books are old enough that the parents will remember them and want to share the story with their kids and see it in a new medium themselves. Second, it has a strong environmental message, which parents will want to share with their kids. After all, going green sure is fashionable these days. And third, it's almost Spring Break and there is hardly any competition this time of year for young movie goers. It's a perfect storm and at this point, The Lorax is killing at the box office, opening the weekend with an incredible $70 million. Impressive.

Now, I have to confess that I didn't grow up with The Lorax book all that much. I know I read it when I was a kid, but we didn't own it so many of the other Dr. Suess books have a stronger presence in my memory. As such, I don't remember exactly how The Lorax went, but I recall the basic message and general story progression. I know it was basically a story of industrialism in fantasy setting. The movie starts in a town called Thneedsville, where there is no sign of natural trees anywhere. Everyone is happy about it even if they do need to buy their fresh air from a greedy corporation called O'Hare Air. A 12 year old boy named Ted (Zach Efron) tries to find out what happened to all of the trees because he wants to impress a girl, so he travels outside of the city to find a legendary figure called The Once-ler (Ed Helms), who knows what happened to all of the trees. His story is about his younger self going out to create and sell his invention, the thneed, which will change the world. But the only material that can make a thneed comes from the top of the trees so when he chops one down, he is visited by a short and mysterious orange man named The Lorax (Danny DeVito), who speaks on behalf of the trees.

From what I recall of the book, the movie doesn't come across as a horrible betrayal of the story. The basic message is there and told in a very fluent manner. That being said, the story doesn't really unravel at the ideal pace. The first act feels very rushed, which is a difficult thing to catch in animated films because for those animating, it takes a long time to create. I just feel like so much more should be firmly established before Ted goes gallivanting off to find the trees. I don't feel like I get to know him, his family, or his love interest Audrey (Taylor Swift) particularly well. The only thing I think we really get a feel of is the town itself, which is fair enough. I guess not everything should get its own song and dance number for the sake of exposition. The good news is that once The Once-ler starts to tell his story about the Lorax, it begins to feel like the movie is moving at the right pace.

The animation is pretty standard stuff, not particularly ground breaking or beautiful, but at the very least they were true to the look of Dr. Suess' art style. There were a lot of architecturally unsound buildings with strange curves and odd shapes, which is perfect. The language of the characters, however, was not consistent with the spirit of the project. It's a fantasy world, but there were occasional pop culture references that seemed out of place and were a little jarring to myself, though I don't imagine that your average child would find themselves bothered by it. But the most memorable parts of the movie didn't rely on lame jokes. Instead, much of the charm comes from the actual worlds that they've created. Thneedville has some fun bits of business to watch, but even better is the old world with the trees and animals. The animals are actually really colourful characters and would get the most laughs from the kids in the audience and myself as well.

Believe it or not, one of the things that bugged me the most about the movie was the voice acting. I'm just not sure that they casted the movie very well, Danny DeVito was fine as the Lorax, though I suppose I imagined the character sounding a bit more distinguished, but that's just my preference and not a fault of the film. The problem is Zach Efron as Ted. I don't mind Efron as an actor, but the thing is that he doesn't sound like a 12 year old boy. I see Ted and he's a kid... then he talks and wouldn't you know it, he has the voice of a full grown man. You know what? That's kind of a big deal. It shows me that they were more concerned about getting a marketable celebrity voice than to actually find an actor who would match the part. That being said, Efron's performance is fine. Taylor Swift on the other hand, I didn't buy and I don't really know why. I just looked at the character and the voice didn't seem right and the performance was lacklustre. It sounded like she was acting and I could see in my head a young girl behind a microphone. Again, seems like they wanted a marketable voice. I'm just not of the opinion that because someone is famous, they are meant to be in the business of acting. And yes,voice acting is acting. Well, at least she was better than Katy Perry in The Smurfs movie. Now that was a horrible decision...

I think kids will like The Lorax and be mostly ignorant of its flaws. There are certainly worse things they could be watching and I believe that the message of the story is an important one for them to see, even if there are some shady marketing tie-ins (The Lorax in a car commercial? Really?!) It doesn't quite have the same emotional connectivity as most of Pixar's work, or the cleverness of Dreamworks, but it is amusing and accessible. It's certainly never boring and often a lot of fun, and I don't believe that the integrity of the original book has been compromised. The movie sure did its job financially speaking though, so we can certainly expect to see more from Illumination Entertainment soon. Yup, Despicable Me 2 is on its way. I can only hope that, even with its success, there won't be a second Lorax movie because... something about that just seems wrong.