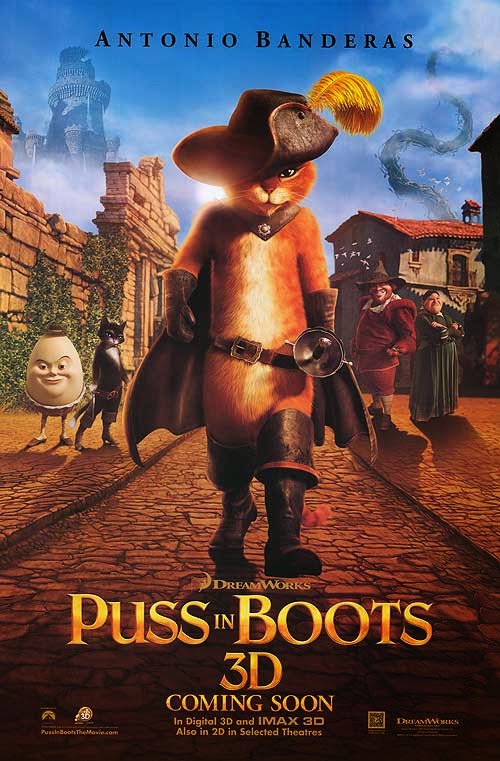 The Shrek movies have their fans and will forever be a landmark for Dreamworks Animation. Not only was the first film start off their 3D animation business, but it's also been their most profitable franchise. I, however, am not a big Shrek fan. In fact, I feel that the first Shrek movie was one of the single most overrated films of the last decade. The only one of the series I thoroughly enjoyed was the second film, and much of that was because of a certain feline character who stole the show. I must not have been the only one to see that this was one of the stronger characters of the series because finally, after the Shrek movies have been (hopefully) put to rest, Puss In Boots has been given his own feature film.

The story takes place before Puss meets Shrek and they become companions. Puss (Antonio Banderas) is an outlaw with a bounty on his head and he learns of some magic beans in the hands of two dangerous criminals named Jack and Jill. Puss has been after magic beans for half of his life and doesn't believe they exist, though he is compelled to track the beans down anyway. He is met by another cat burglar (get it?) who is also after the beans and their competition gives them away and they both fail. After tracking the other burglar, he learns it is the notorious (and beautiful) thief Kitty Softpaws (Salma Hayek) who is teamed up with an old friend Humpty Alexander Dumpty (Zach Galafianakis), who Puss had a falling out with after being betrayed by the greedy egg. Now, they're teamed back together to seek the magic beans that will grow a magic beanstalk leading them to a castle with endless riches.

Wow, that plot wound up being a real challenge to summarize. It's really quite a strange jumble of fairy tales, not unlike Shrek. I'm actually impressed that they managed to make it fairly intelligible and easy enough to follow that kids shouldn't have trouble keeping up. Though, I have to confess that I have some complaints about a plot twist in the third act of the film which I felt didn't quite work with the story. That being said, I see why they did it, I just think it should have played out differently. I can't really elaborate because I don't want to spoil the movie.

Puss In Boots is not a Shrek film and the only shared character is the title role. More importantly, it feels very much like a different kind of movie. Shrek was a fairy tale spoof. Puss In Boots is an adventure film, set in the same world where various mother goose characters all coexist... not always peacefully. It is often funny, but not always hilarious and I believe that is intentional. Puss is a funny character but the story isn't about gags. It's about relationships, betrayal, and redemption. Well, when I put the big words there, it sounds a little deeper than it is.

But let's be honest here, Puss was the optimum choice for a feature length spin off. I can't think of any other character from Shrek who would work as well. Would you watch a Donkey movie? You might? I don't think I would. Puss has a more dexterous form, making it easier to build a story for him. His past was a mystery, but much was implied. If anything, I can't help but feel that Shrek was holding him back. I think for the most part he was just following Shrek and Donkey around and occasionally he would have a chance to shine and do something cute and impressive. Puss In Boots has a fast paced story with so much energy and action. In fact, I sort of feel that this still isn't the best possible Puss In Boots movie that could have been made around this character. And I also wonder what would happen is some company actually wants to do an adaptation of the real Puss In Boots story. This film is not that.

I especially recommend Puss In Boots to people who love cats. Cats are a never ending source of amusement to many people (myself included) and there are many visual gags and character traits that Puss has that should be entertaining. Sometimes these jokes are very subtle, sometimes they are not. I'm glad that the film makers had a sense of humour, but were not talking down to their young audience. Adults will find some jokes for them and may also be swept away by the action. Whatever the case, I think most will find something to like in this film.