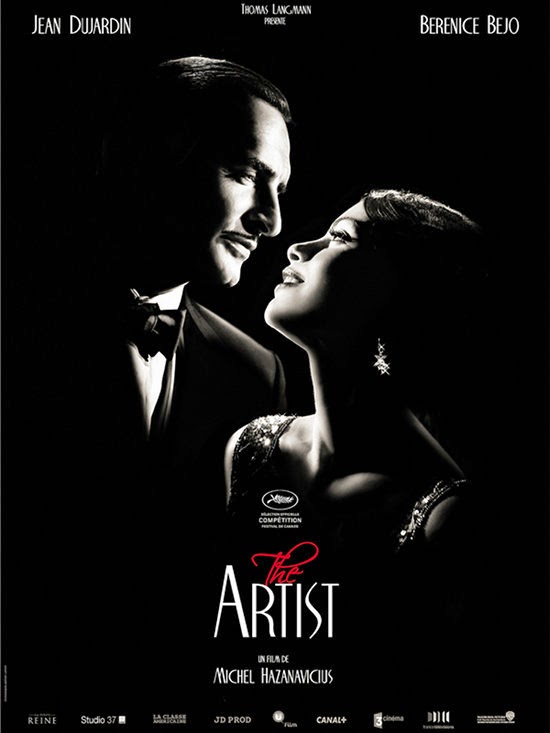 If The Artist does just one thing right, it captures the look and feel of a classic silent movie from the 1920's. This is clever on a number of levels because the film takes place at the end of the silent era and explores the changes of cinema at that time. It followed George Valentin (Jean Dujardin), one of the biggest silent film stars in Hollywood. In an encounter with a young actress named Peppy Miller (Bérénice Bejo), he unknowingly starts off acting her career. However, not long after that, a big step in cinema is being made. Movies are becoming talkies. George doesn't believe that this trend with catch on, but Peppy steps up to the challenge and signs up with a studio set on making her a star. Mr. Valentin however leaves the studio and goes to finance his own silent movie, putting everything of his on the line.


I think this movie connected with me in a way that I didn't really understand until after a little bit of reflection. The movie's theme is "out with the old, in with the new." George is a loveable protagonist, even if his ego is a bit too large for his own good. Big changes are intimidating, especially for those who are the best at what they do currently, and the idea of becoming obsolete can be unbearable to many. The audience knows that talking picture will forever change cinema because it's common place now, but George wants to fight it. I think a lot of people will at least understand where he is coming from. He sees what he does as a timeless art form, while others see it as archaic. Isn't it interesting how the style of this film is novelty to the point where there is Oscar buzz over Dujardin's performance? Dujardin is validating his character's opinion by showing the world that it takes skill to perform in that way, now that it is no longer common place. The Artist is strangely self fulfilling.


Back on the subject of how I connected with the movie, I feel that, while The Artist is about a very specific time in cinema's history, the conflict that George is going through is very universal and just as relevant today. For example, I worked as a projectionist at a movie theatre. Cinemas are going through a big change right now as most of them have switched over the digital projectors replacing the classic 35mm film projectors. Essentially, I lost my job to this advancement in technology. Of course, this comes with its own problems, but I might write an article about that subject some day soon. The point is that I could understand Valentin's fear and reluctance toward change. And I doubt I'm the only one.


Strangely enough, The Artist deals with some heavy issues and I didn't even think about it all that much until later. I was just along for the ride while the film was playing. It deals with rejection, divorce, alcoholism, depression, and issues along those lines, but it doesn't feel very heavy. It mostly maintains a very light tone and keeps a good sense of humour throughout. It's not that it comes across as false, nor does it understate the severity of the problems; it just allows the style to carry the movie through the darker territory. That's a fine line to walk and the movie dances joyfully on it.


I might need to watch it again. I liked it, but I'm not sure if I loved it. I certainly believe that The Artist is a clever and fun movie with a lot of heart. It really feels like a love letter to the silent era of cinema and the stars of that time. It's the exact movie that it intended to be and it accomplishes a lot. What more should I ask it to be?