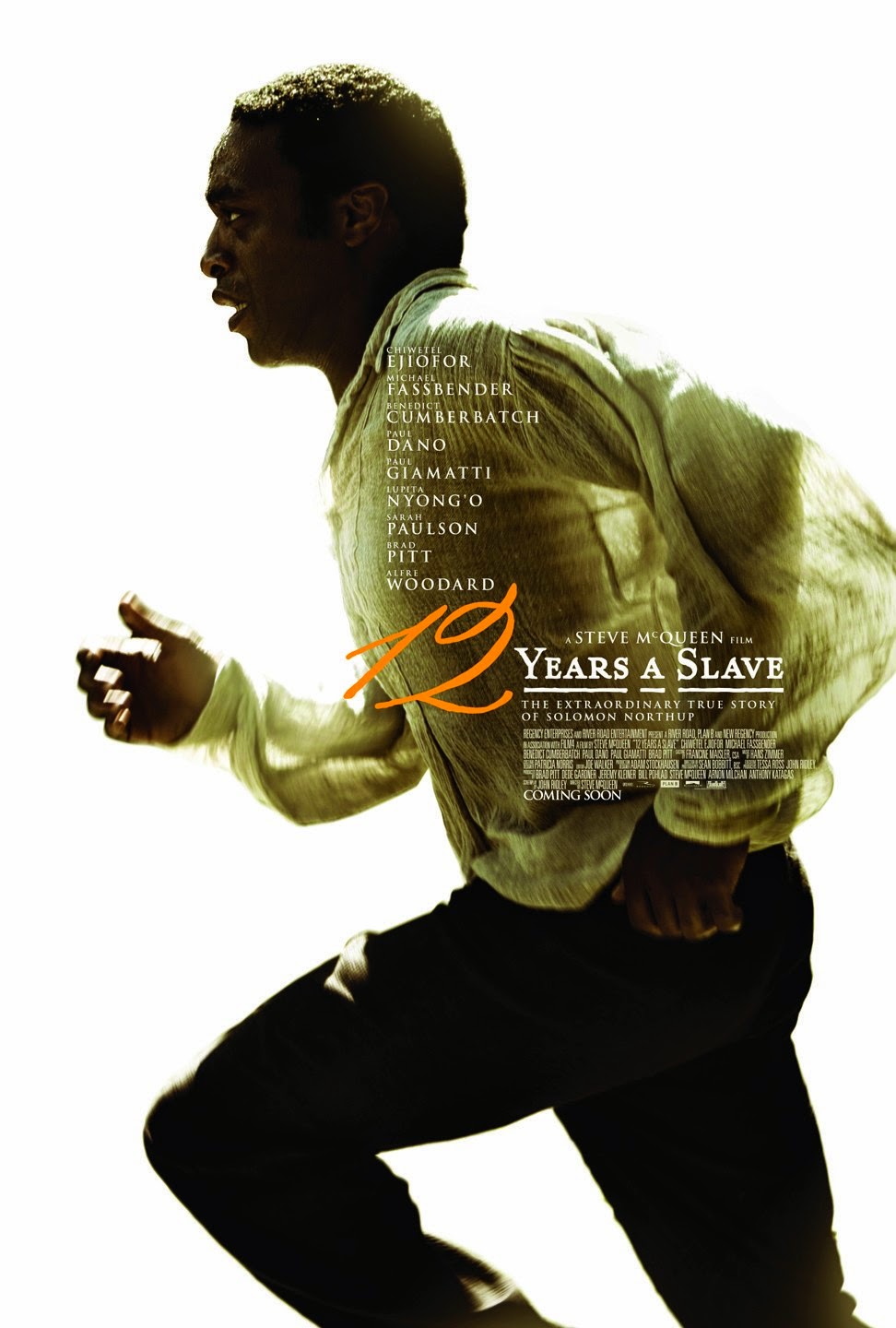 The third film by Director Steve McQueen is perhaps his most ambitious yet. Adapting the brutal memoir 12 Years A Slave into a feature film was something not every director would be able, or even willing, to take on. But McQueen is no ordinary director, having make a mark on the film industry with his first two pictures, Hunger and Shame, both of which I reviewed with much admiration. What he excels at as a director is tackling subjects that really matter. Whether its the mistreatment of prisoners, sex addiction, or slavery, he takes on his subjects on with brutal, unflinching honesty.

12 Years A Slave follows the true story of Solomon Northup (Chiwetel Ejiofor), a free black man in the United States who had a wife and two children and was an excellent violin player. While his wife and kids are out of town, he gets a generous offer to join in a travelling performance group. He accepts, but it turns out to be a ruse, and he is kidnapped and given a fake identity, a slave called Platt. And the more he fights his new found place in life, the more oppression is weighed on him.

Sometimes you know you just watched a film of significance the moment you walk out of the theatre, but 12 Years A Slave is such a heavy film that, a few weeks later, I still find myself carrying the burden of it on my shoulders. It is not a movie you go to see to enjoy; it is a movie you must endure. And if you know that you can stomach such a film, then I would definitely encourage you to see it because it is an extremely important piece of cinema. Django Unchained turned slavery into a genre film. The Butler was later in history, but did make the civil rights movement a little bit mainstream. I'm not saying these movies were bad, but 12 Years A Slave takes the most realistic, unflinching look at that time in American history since the mini-series Roots.

What I've noticed about McQueen as a director, and I noticed this in both Hunger and Shame as well, is how he uses silence to his advantage. There is tension in silence. There is much you can build on when you take time to breath and let the actions on screen speak. When I write a script, I find that I rely heavily on dialogue, but granted, I tend to write comedy. But with an emotional drama such as this, especially when there is supposed to be a significant emotional impact on the audience, the silence allows us time to feel the weight of the events. Not to say that there isn't much dialogue, there is and it's very good dialogue. It is genuine and has deep impact. Solomon is an intelligent man who speaks with strength and dignity.

Great performances abound all through this film. First, I've been a fan of Chiwetel Ejiofor for years since his performances in Serenity, Inside Man, and Kinky Boots. Each was a radically different role, but played with great charm and intelligence. Hell, he even managed to do a decent job in the shallow end of the world pic, 2012. 12 Years A Slave is his greatest performance yet, if not just because it gives him the opportunity to have a character and story full of substance and intense dramatic moments.

This is an interesting film in its casting because there are a whole smorgasbord of actors in this movie or varying degrees of recognition and fame and they all do phenomenally in stepping up to the challenges of this film. McQueen knows how to get good performances. The only exception, I have to say, is the biggest name in this film ironically, Brad Pitt. It's not that he was horrible or that I think he's a bad actor, I just didn't feel him in this part. It felt like a Brad Pitt cameo and it didn't seem to fit the rest of the film. All in all though, it wasn't much screen time and that's a relatively small complaint about an otherwise outstanding film.

Paul Dano, who gets a lot of these sort of gritty roles these days, plays an insecure slave driver who finds himself at odds with Solomon and is intimidated by his intelligence. While their story is relatively short, the power struggle is an interesting one to witness, if not frustrating. There is more meat to the story of Edwin Epps, played by Michael Fassbender, the cotton plantation owner who is known for being considerably more cruel to his slaves than Solomon's previous owner. What makes Epps so interesting is his internal conflict surrounding his prized slave, Patsey, who picks 500 pounds of cotton a day when the average worker picks about 200. He is tortured by his attraction to her as if he is unable to understand why he is superior to her, but cannot fathom anything different. Perhaps that underlines the irrationality behind bigotry when even those who stand for it find themselves unable to rationalize it. It is trained and ingrained in their person. It's also worth noting that Lupita Nyong'o, who plays Patsey, gives an outstanding and memorable performance also.

12 Years A Slave is one of the best movies I've seen this year and it will likely linger with me for a long time. As award season is starting up, we're already hearing it gather nominations from the Golden Globes and the Screen Actors Guild Awards. I have no doubt in my mind that it will be a top contender for the big Oscars. I really believe McQueen should get an Oscar nomination because I feel that he is going to be one of the best directors of this generation.

Solomon Northup's story should be known. See this movie, but only if you can. It is not for the faint of heart and will only disturb you if you are a sensitive viewer. There is violence, nudity, and graphic torture, but the disturbing content serves the story and doesn't feel self indulgent. In fact, the movie couldn't have the same impact any other way. But if you know that you can take that kind of experience, this is a powerful picture to view. Sometimes we need to get struck in the face with our past mistakes to remember why its so important to move forward from them. Though, it is also encouraging to see how much we have progressed so far.

A final note, not on the film, but something that it made me think of in our culture... One thing that this movie made me think of was the use of the N-word in popular culture. The more I see films like this, the more is astounds me that it's used so shamelessly and without regard in pop music and other media. And yes, I understand that it is said by black people and supposedly it's not racist if that's the case, but I kinda disagree. In this film, the term is used by black people as a derogatory term for other black people. On the boat that was transporting Solomon and others to the south, Clemens, one of the captured slaves calls the slave class of black people by that term saying that they're born and raised slaves and have no spine. So, I know that I'm a white guy and really should have very little say in how the word is used today, but it seems to me that it is a term that should not be tossed around so lightly no matter who is saying it. It is a derogatory term that should stay in the past, in my opinion.