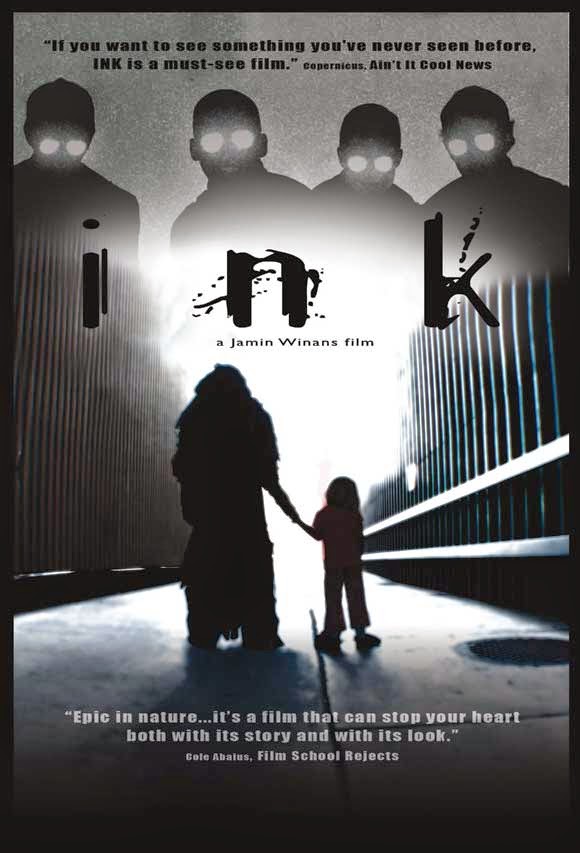 Independent film making is a difficult venture. There are many challenges a film maker comes across when he or she wants to make a movie with a very little budget. So, when one comes across a feature film that is as ambitious as Ink, but with little to no budget, one has to at least admire that they managed to finish the project. Ink has gotten a fair bit of recognition since it started to make the festival circuit in 2009. I watched the film and had mixed feelings about the movie as a whole.

It takes place in a world where mysterious people called Storytellers, that no one can see, visit our rooms while we sleep at night and give us good dreams. But there are also dark versions of these people called the Incubi who give us nightmares. The movie follows a little girl named Emma who is taken from her sleep by a cloaked figure who goes by the name Ink. Her body remains in her bed, but her consciousness is taken captive. The Storytellers set out to find her to return her mind to her body where it is safe. Meanwhile, her father, John, is a businessman who is finding a lot of success at his company. He is no longer Emma's guardian as her grandparents sued for custody and won. Now, with Emma in a coma, they have come back to John to try and get him to visit her in the hospital to mend their relationship.

I don't particularly like faulting a movie on problems that I know are results of budget constraints, but that's one of the problems when you make a film this ambitious in scope with such limited funds. As a film maker, I could see all the ways that they used effects and cuts to cover up the budget issues, but I could see this being distracting to an average viewer. For example, the whole film had an over saturated effect in pretty much every scene. While this would work for scenes that may have involved being in the dream world, having it be present in every scene gives the wrong impression. It makes the whole movie seem like a dream as well as makes it difficult to settle into watching the movie at all. It also doesn't help that the film is clearly re-dubbed. This is a common practice, but it is usually done better. Again... budget constraints. At least the dialogue matched the mouth movements because I've seen films where that doesn't even happen.

The pacing of the movie is a bit slow and much of the beginning is a bit of fluff that could be trimmed. It really didn't leave a great first impression. I wasn't sure if I wanted to watch the whole movie. The scene which establishes the Storytellers and the Incubi gets the concept across, but doesn't really have any form of subtlety to it. And then it leads into some overly long fight scenes which are interesting and well choreographed, but ultimately too long.

But don't give up on this movie just yet; you have to be patient with it and try to learn how to enjoy the ride. Ink is very unusual so one needs to pay attention to it. Once the conflict was established and the story gets rolling, I started to get really invested in the movie. In some ways I was still a bit distracted, but we are at least given the chance to know and understand these characters and why they do what they do. In particular, John is very well fleshed out. We're given a very moving back story of him and his family. It's as if the beginning of the movie had us asking too many questions, but once we start to get the answers we slowly become more satisfied.

One of the strongest aspects of the film is the art design. The characters are distinct and creative, adding a mystical and earthy feel to a lot of the film. It's really a lot of the reason why the film comes across as creative as it does. It feels like an original movie because it looks like one, and of course, film is a visual medium. Ink is an curious character to behold, though I might have ditched the fake looking nose. But most of all, I like the contrast between the Storytellers and the Incubi. The Storytellers are young and well dressed, decked out in modern wear and weapons, while the Incubi are like darkly dressed surgeons with a spooky sheet of glass in front of their faces. The look of them is incredible and really gives the film that overall darker edge.

It is a mixed experience to watch Ink, but one not without rewards. There are some fun action sequences if you're looking for that, but if offers more of a cerebral, visual experience for those looking for more substance in their cinema. At the very least, it is a film that leaves an impression and had me thinking about it for quite a while after my viewing. I have respect for it, but also feel that it could have been a lot more. It shows that, when you have a good idea, it can go a long way and overcome obstacles like budget issues... well, some of them.