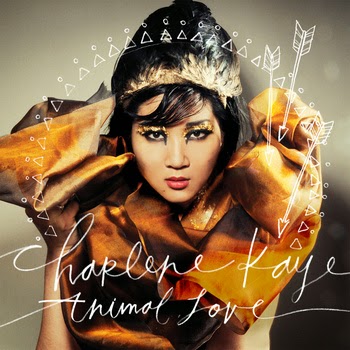 Since the release of her first album, Things I Will Need in the Past back in 2008, independent singer / songwriter Charlene Kaye has released a number of singles and EPs and has been building a loyal fan base. And a couple of years ago, I joined that fan base simply by stumbling upon her bandcamp page and instantly noticing her honest song writing and outstanding voice. Sometimes you can tell when a talent will definitely go somewhere and I recognized that right away. So, when she came to her fans for help on her next album, I gladly donated to her cause as best I could. And I wasn't the only one as she surpassed her Kickstarter goal, making over 50% more than what she asked for.

The end product of the following sessions is Animal Love. After hearing it I fully realize why she came to her fans for financial help. While the music she made before this album was quite good, it was still limited in some aspects. Her songs worked because they were well written songs, but she may have felt trapped by her budget constraints. Many of the songs were they sort of typical acoustic or piano driven singer / songwriter genre, which has a market and is a reliable way to make inexpensive music that can be very good. But it's clear to me that she wanted this new album to be so much more than that. And that it is. Animal Love is a crisply produced and catchy pop album.

What's unfortunate is that these days “pop” is a dirty word to some, but I certainly mean no disrespect by using it. I would argue that pop music is just a sadly misused opportunity these days. I'm sure I've discussed this before in past reviews though. The point is that Animal Love is a very good pop album. Charlene rose to the occasion to produce a work that is catchy, heartfelt, and often fun.

It has two title tracks which bookend the album. “Animal Love I” was the opening single and starts the album off on a high point. It's a glamourous dance song, with thick synthesizers and a groovy beat and it's so good it almost sets the rest of the album up for failure. Not to mention that its video is amazing. It's a single shot sci-fi romantic dance number that compliments the music so that they're almost inseparable. It's great to see another example of film and music being married. Often it's obvious when music strengthens cinema, but it's not always obvious that sometimes visuals can enhance the musical experience also. Clearly we don't have enough awesome music videos like this one. Charlene's sister, Liann Kaye, directed it so the two siblings make for a powerful duo.

Not all of the songs have the same kind of initial punch as “Animal Love I”, but many of them are rewarding in their own right. Charlene's strength as a songwriter hasn't been muted by the production quality of the album. The album is diverse in tone and style as she allows gritty rock sounds into songs like “Poison Apple” and “Forever Is A Long Time.” Mixed in is the piano ballad “A Million Years” and the A Capella tune “Until The Morning.” Every track has a unique flavour. She borrows from different genres and infuses the songs with her own personality. She sounds confident and sophisticated and it really makes her stand out above her peers.

Her songs are kept classy which is a characteristic lacking in a lot of pop music on the radio. She doesn't over sexualize her songs and also at no point does she rhyme anything with “Jagger.” The music is relatable, appealing on an emotional level. She doesn't rely on cheap tricks to invest her audience, but simply writes songs and lyrics that reflect an emotion, picking a subject that correlates with the musicality of the song. It's a careful craft, but she makes it seem easy. And on that front, the album covers a lot of ground. Every track has a different feel to it and touches on different emotions. “Hummingbird Heart,” for example, gives a feeling of encouragement, while “Don't Make Me Believe” conveys desperation.

The two title tracks are the key to the album's success. They talk about the idea of love in two very different ways, and it's fitting that they're placed where they are in the album. “Animal Love I” is a pure display of the carnal excitement that comes with fresh romance. “Animal Love II” comes from a very different perspective. This explores the needs that come with love, and gives a sense of yearning for something more mature and sustaining.

The more I listen to this album the more I appreciate it. It's good to see that she has given her fans a worthwhile investment. I definitely feel proud that I helped contribute to its creation. Animal Love is an admirable piece of work, both intelligent and accessible. It's a creation from an artist who loves her art. Kaye's passion mixed with her pop sensibilities make for an ideal fusion, giving people what they want on a base level, but not feeding impressionable ears with musical junk food either. It's exactly what pop music should be; pleasure without the guilt.