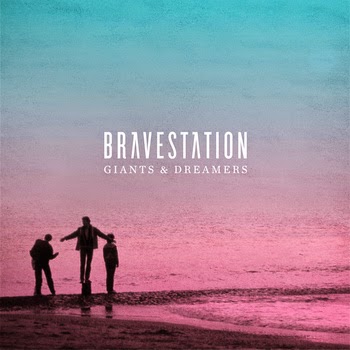 Although Toronto apparently isn't actually the centre of the universe as many of its occupants believe, one thing can't be denied; the music scene there is unbelievable. The alternative rock scene that has emerged from there can boast bands such as Broken Social Scene, Metric, and Stars. Who have come out of Vancouver? Chad Kroeger keeps trying to pick up our women, but I'm blaming Alberta for Nickelback. Anyway, The new generation of internetting indie rockers needs some solid Canadian representation and I have a nominee. I present to you Toronto's very own Bravestation, a quartet of young and talented musicians with a clear and confident vision.

Their approach was a smart one; their 2010 EP was released for free download to bring in new fans with no strings attached. I was one to download said EP I instantly liked their sound. It was a very solid collection of songs. But their new release is a full album and costs a reasonable $8 to download. I see how it is; first taste is for free. At least there are no negative side effects, though I haven't felt what the withdrawal is like yet.

Thick with reverb and calming riffs, Giants & Dreamers is Bravestation's debut album that offers a blissful escape from your worries and allows you to indulge in nine new wave inspired tunes that are slickly produced and well written. I really like Bravestation's sound. They've really figured out the right balance of airy vocals and smooth guitars and synthesizers. It all seems so effortless, though I can't imagine the process being easy. I have to admit that for a band that is still starting off, it's impressive that they were able to achieve such a polished sound. What's even more impressive is that it seems that their music is recorded at a home studio, but I can't find too much information on the recording process.

If there was a criticism that is legitimate for this album, it would be that people might see it as a bit redundant. There isn't a lot of variation in style or mood. I would argue though, that this isn't a huge deficiency. The consistent tone I feel works to strengthen the album and the songwriting is varied enough that at no point feel like they're just dishing out the same song in a different package. They have enough of their own identity and occasionally will take some very interesting turns. But the atmosphere that the songs bring is a really pleasant one so even if they are a little too similar sounding, it isn't frustratingly so. The more you listen to them the more of a unique identity they gain.

What is interesting about the songs on Giants & Dreamers is that they works in a lot of contexts. Some albums seem to appeal to a certain mood or even time of year. I imagine this being a great soundtrack to a sunny day on the beach as well as a walk through the snow. I imagine this being comforting during a break up or also great for celebrating a new love. It's got a strange universal appeal that can bring in any sort of audience. I find it hard to imagine anyone hating their music outright.

The album has a very positive energy about it. There is a restrained passion to their sound that I think sums up what works so well about Bravestation. They use a lot of restraint, allowing the songs to flow out naturally and casually. No one sound is there to dominate another; there are no crunching guitar solos to be had and there doesn't need to be. They know the strength is in the whole product and that is something worth admiring. And that lets the listener enjoy the subtle details as they revisit the tunes. And I am certain that they will visit again soon.