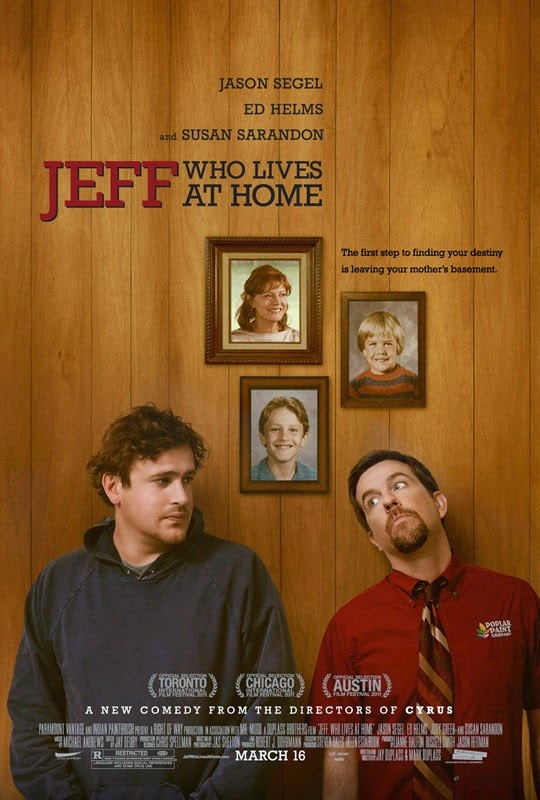 I think we live in a time where people don't know what to do with themselves. And yeah, that includes me. I think we have a difficult time finding fulfilment because we are given messages that we can achieve anything we want if we put our minds to it, but the truth is that most of us just carry on trying to survive and as such, we find ourselves unsatisfied by the daily grind. This dissatisfaction is both a good and bad thing. It's a good thing in that it pushes some of us to better ourselves and achieve our goals, but it can also be a bad thing in that it can take the joy out of the more average things in people's lives that can also be rewarding. Jeff, Who Lives At Home is a film that explores this from a number of points of view.

The movie starts with Jeff (Jason Segel) pondering the meaning of life, refusing to believe that he was destined to be the underachiever that he's been so far. He speaks of the movie Signs, noting that the film was trying to say that everything in life has a purpose even if we don't understand it just yet. So, when underwhelming events of that way cause him to pursue the name “Kevin,” he finds himself on an unlikely journey that has him run into his older brother Pat (Ed Helms) who is having trouble in his marriage after buying a fancy new car against his wife's wishes. Now, he suspects her of cheating on him and wants Jeff to help him find out the truth.

The film explores three lives in very different places, but each suffering from a similar affliction. Jeff is, by society's standards, a complete failure. He is a 30 year old still living in his mom's basement and can't even muster the inspiration to go out to the store. He doesn't like his life and where it is. Pat however, has by society's standards, progressed in life and might be considered a success as he has a stable but modest job and is married. However, he is very unhappy also. Their mother, Sharon (Susan Sarandon), has spent much of her life at the same job and has no idea what to do with her sons. But most of all, she just feels like she wound up in a life that she never intended to be in and is disappointed. None of the characters are content with where they are, despite having achieved varying levels of what some might consider successes or failures.

I suppose Jeff, Who Lives At Home asks the question of why we find ourselves so unhappy with life, and gives us a glimpse into these quirky characters' lives and we see what happens when they take their fate into their own hands and pursue their happiness, whether they know it or not. It explores the idea of destiny and whether or not it can be obtained as long as one is seeking it. Were the events propelled by a higher order or was it because Jeff took the steps to seek it out that the events played out as they did?

It is written and directed by the brothers Jay and Mark Duplass, who are known for making understated films about unusual family situations, though I must confess that I haven't seen Cyrus or Baghead. This film makes me want to see them though because I thought that Jeff, Who Lives At Home was a very well thought out movie that was surprisingly funny and offered a lot of insight into inner struggles in both individuals and relationships. It's the kind of deep film where it doesn't try to hit you over the head with what it's trying to say, which I really appreciate. It works because it has a story to tell and good characters to keep you invested in it.

The actors do a good job with the material. Jason Segel doesn't play the same guy that he often does. Jeff isn't as charming and doesn't have himself together. He's a bit more of a melancholy character, and while his naive view on life seems a bit exaggerated, it isn't completely unbelievable and I think much of that is thanks to Segel's likeability as an actor. Ed Helms is also good in the role, though he treads on familiar territory, reminding me much of his character in The Office. Thankfully Pat is less dimwitted. Helms can do a very impressive balancing act by playing men who are frustrating to watch, but also likeable enough to warrant sympathy.

If there was one thing that distracted me from the film, it would be the cinematography. There were a lot of shaky camera shots with sudden zoom ins and outs, and when I first saw this technique I couldn't quite wrap my head around it. And it continued to happen through the film so it seemed to be a choice rather than a botched up shot. It looked unprofessional, to be honest, but once the story got moving, I started to adjust to this strange choice and came to accept it. Someone said that there was a specific shot at the end of the film which seemed to justify that stylistic choice, but I think I missed it when I was sipping my drink or something. Shame. Perhaps I'll have to watch it again.

Jeff, Who Lives At Home surpassed my expectations and was a great demonstration of low-key film making that works because it's a story that has something to say and characters that move the story forward. It's not a masterpiece, but it's not intending to be. It is a film worth seeing though, particularly if you find yourself trying to find meaning in the struggle of life... or if your name is Kevin.