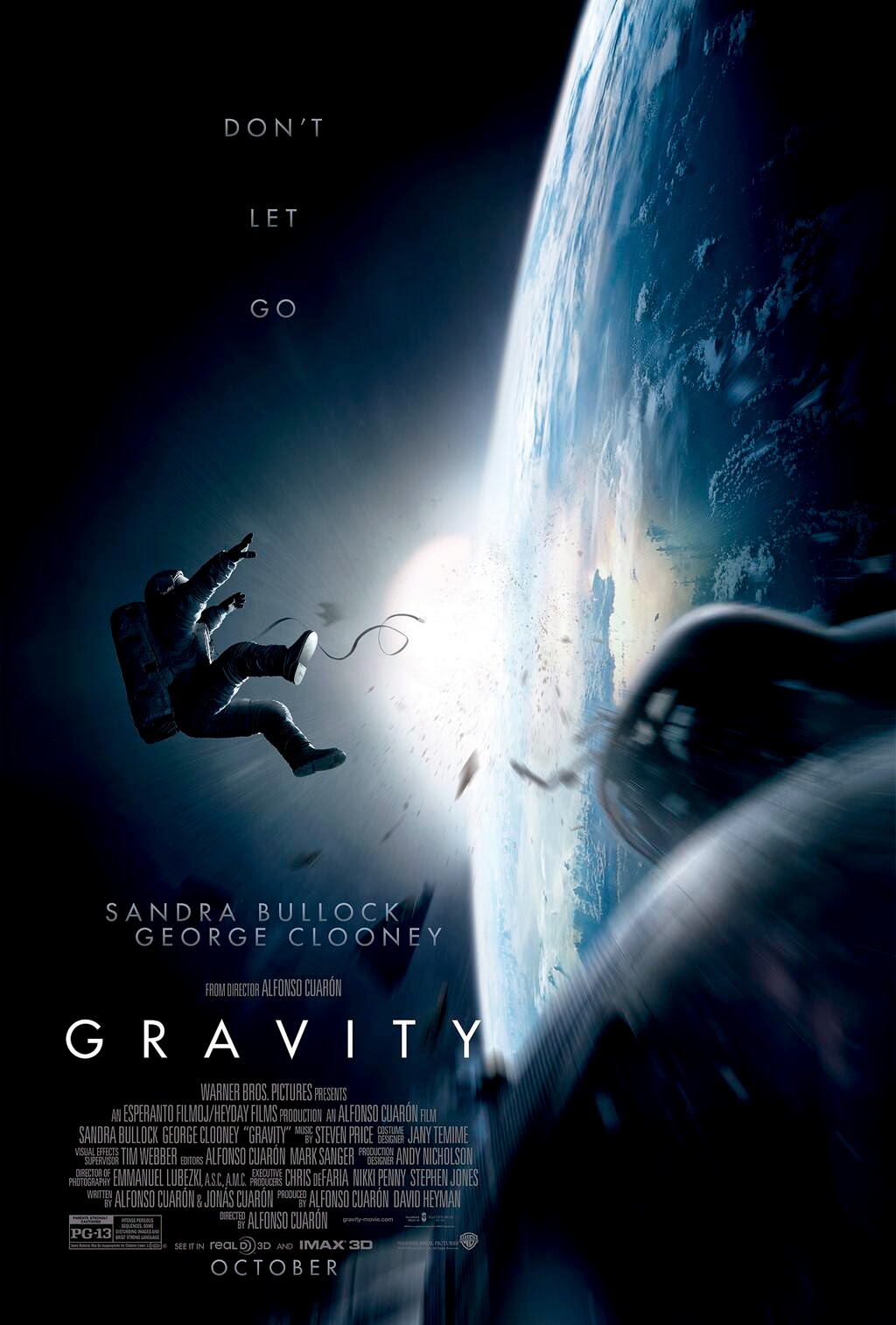 I was originally not going to write a review for Gravity. It seemed like movie critics did their job and recommended the film into the top of the box office. Either that or it was the riveting trailers, and I didn't know if I could add much else to the buzz around the movie. But someone asked if I could do a review so I might as well. Perhaps I can add some insight into the film. At the very least, I want to address some criticism that I've heard surrounding this picture.

First off, let's discuss the plot. After Russians destroy one of their satellites, it causes a chain reaction causing endless amounts of space debris flying which intercepts a repair mission with mission specialist Ryan Stone (Sandra Bullock) and the crew of the space shuttle Explorer. Disaster strikes and the Explorer is damaged leaving Stone and space-walker Matt Kowalski (George Clooney) alone and adrift in space eager to find their way back to Earth.

So, what was is that made me want to see this film? Children of Men. The best advertisement for me was Children of Men, director Alfonzo Cuarón's previous film from 2006. After seeing that film I knew that I would watch everything else Cuarón put out because it left such a deep impact on me and would eventually make it on my list of favourite all time movies. I'm glad that even still, I went into Gravity with reasonable expectations. And while I will admit that I didn't enjoy it quite as much as Children of Men, I'm okay with that and still was quite satisfied with the results of the film. And that's because it was exactly the movie is aimed to be.

And thus, we go to complaint-that-people-seem-to-have number one: the plot is very basic. Yes, this is true. But the thing is, this movie doesn't need a complicated plot. It's an A - B story line and sometimes that works really well. In fact, if you think about it, Children Of Men had a fairly basic story too. That one was 'there's the last baby! Keep it alive!' This one is more like 'Ack! Space is dangerous! Keep me alive!' Alfonzo Cuarón is a talented film maker in that he can make the best of a simple concept. He can develop a single idea into something worth watching for an hour and half and that actually takes a lot of talent. Some film makers can't even make a ten minute short that doesn't overstay its welcome. But Cuarón creates amazingly tense scenes and conjures up excellent performances from his actors, in this case, actors who have basically nothing to react to since it was filmed entirely in front of a green screen. No, sorry folks, Gravity was not shot on location.

This was an audience's chance to experience something that they won't ever experience in real life, or at least, it is very unlikely. We've all wondered though, I'm sure, what it would be like to be flying through space and helpless... or at least I have. Well, this movie may be the closest you will ever have to that experience or at least I hope so. Gravity is an extremely emotional and immersive experience and to add more story would simply over complicate things. And I have to say, while I'm rarely every sold on 3D, this one is worth watching in that format. I even flinched at some flying space debris so it's really well done. This is what 3D should be. It didn't feel like a cheap way to make some extra money, it felt like an extra ingredient to fulfil the film's objective.

The second thing people like to complain about is that some scientists have revealed that the events in this movie are not possible. Yes. I'm okay with that. This is fiction. I'm not going to be pedantic about it and expect that in order to entertain me you must adhere to every scientific detail to maintain full realism. In fact, I can sleep a little better knowing that this won't happen to some hapless astronaut! I think it's an achievement that they even had people questioning whether or not this was possible.

I have a particularly neurotic step father who took issue with the fact that this movie's name was Gravity, saying that it was inaccurate and that it should really be called something like “Falling In Space.” While he has a mathematical mind, perhaps marketing isn't his strong suit. I mean, gravity does play a part in the film, in that at some point something has got to come down to Earth. My point is, if you let little details ruin your enjoyment of a movie, why did you come out to watch the movie? Sure it's not realistic, but it's damn engaging. And trust me, there are movies we watch that take much more suspension of disbelief than Gravity. At some point you're just going into the movie for something to complain about and there are far better things for you to spend your money on. And in the end, the movie wins because you gave them $12... or $15 because it's in 3D.

And I feel it's worth adding that Steven Price's score is really quite amazing. It's probably the movie score I've enjoyed the most since Inception. I rarely buy soundtracks, but I'm seriously considering picking up this one. It is a crucial part of the film, as it adds so much tension to the action scenes. There is something so naturally tense about the throbbing electronic backdrop of the score that it brings even more immediacy to the screen. It matches the whole tone and visual style of the movie, which it should, but it does it so well. Often movie scores are mostly invisible to me while watching a film as it blends into the overall product, so it's only when it fails at complimenting the film or is exceptionally good at it, that I take notice.

So, when seeing Gravity, bring your expectations down to Earth a little (Get it?). It's a movie that provides an experience and will provide that best on the big screen. For what it is, it couldn't have been done better.