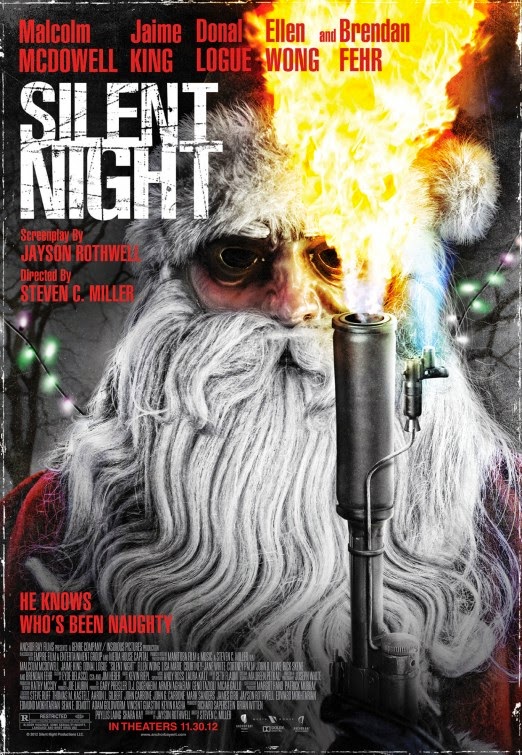 In my search for some alternative Christmas movies, I remembered a movie that came out last year called Silent Night. Apparently it's a very loose remake of a 1984 Christmas slasher film called Silent Night, Deadly Night, which was panned back when it was released, but has since garnered a cult following. Back in the day it was controversial to have a killer in a Santa suit, but nowadays nothing is sacred I guess. Audiences have seen it all and if there isn't a horror movie made about a holiday, it's only a matter of time.

I'm not really a horror movie fan in general. When done well I really appreciate them, but for the most part I find them ridden with clichés or just aiming to hit a gore quota or body count which gets pretty old fast. But I've seen a killer Santa movie or two in my time and they tend to pretty tongue in cheek and I like it when horror films are like that. Part horror, part comedy. But it didn't take too long into watching this movie that I quickly discovered that Silent Night was not going to be a fun, rollicking wink to the audience.

It takes place in a small town where a killer dresses up like Santa Claus and... kills people who he deems to be naughty. Enter Aubrey Bradimore (Jaime King) who is a widow and a police officer. She gets called into work on Christmas Eve despite trading the shift. Anyway, people are getting killed and they can't find the guy and they learn he's dressed up light Santa Claus, but so is everyone because it's Christmas Eve and there really isn't much more to it than that.

So, I think I'll just say it; this is a horrible film. It's not that it's particularly poorly made because as far as slasher movies go, it works. People die and it doesn't look cheap. The problem is that it's just so mean spirited and dreary. Even down to the look of the movie. All the colours are muted and given a cold blue treatment. I suspect this was intentional, but it really sucks the soul out of the movie. I think we underestimate what a colour pallet can do to the mood of a movie because it happens on a very subconscious level. It took me a while to figure out why I didn't even like looking at the picture, but I think that's the main reason.

The film lacks a subtle touch as we're forced to feel like the people Santa kills were okay to kill. I get that this is the idea behind the killer in that he only kills 'naughty' people, but they cram it down our throats that these people deserve to die so they act in ways that aren't realistically bad. For example, there is a priest who is so over the top in how sleazy he is. He emphasizes that he's a bad person with every word he says. Poor, poor performance. I couldn't have played it worse. Also there is a young girl who yells at her mother, smacks her heart pills out of her hand and demands a trip to the mall. Look, I get that some teenagers are materialistic, but this is just silly. It's like it's supposed to cushion the blow that she's about to get disembowelled by a killer. Well, no, it just feels like a writer trying to manipulate me into his narrow vision of morality and justice. And look, I know how movies work. It's all manipulation of audiences emotions, that's how films and any form of storytelling work. But skilled film makers do so without it feeling like you're being played. They do it with grace and dignity.

Actually, very few characters seemed to be likable to any degree. It's like a whole cast of shady characters so that we don't feel bad when they get axed, literally or figuratively. The few exceptions are Aubrey and her father (John B. Lowe), the latter being likeable to the point where it feels forced also. But I have to admit that Jaime King does a really good job carrying this film and makes for a smart and confident female lead with realistic vulnerabilities. They did a good job of developing her character and she played it with restraint and intelligence. That is a good thing to get right so someone knew what they were doing. It's a shame that she's the only well rounded person in a town full of clichés. I guess that's not fully accurate. One of the girls at the police station, Brenda (Ellen Wong) was a good character as was... umm... maybe that's it. Even Malcolm McDowell's character was oddly irrational at times despite the legendary actor giving the role a little bit of gusto.

I suspect that the reason Silent Night, Deadly Night was so hated by critics back in the day is for the same reason why 2012's Silent Night is dreadful to watch; it's no fun. It's gruesome, mean, and completely unoriginal. If you want some better alternatives, check out Christmas Evil from 1980, or the much sillier Santa's Slay from 2005, which has a lot more fun with a killer Santa. This movie made me appreciate that one all the more. Or you could skip killer Santas all together. I think I'll take a break from this genre for a while... Silent Night spoiled it a bit for me.