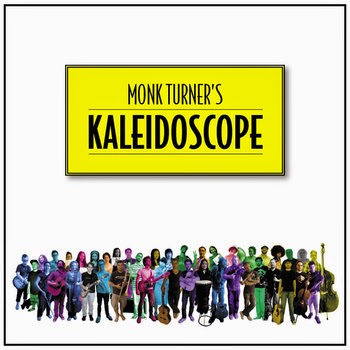 If you haven't heard of Monk Turner. That's understandable. He's been making a modest splash in the indie music scene as he attempts to bring back concept albums, a lost art in today's single focused music market place. I heard about him through musician Jacke Karashae, who I knew well quite a few years ago and have kept in touch with online after he moved to California. He has a guest spot on this album, Monk Turner's Kaleidoscope.

It's pretty good. This isn't a concept album as some of his previous released were because it doesn't seem to tell a consistent story, but there is an obvious theme that remains consistent as well as a distinct structure. The theme carries through the titles of the songs and is focused on colours (please forgive my Canadian way of spelling it), working through 18 different shades through the spectrum. Like the different colours, we hear different voices speak on them. Kaleidoscope really is the ideal name for the album as it not only explores different colours through the lyrics, but also explored different genres due to the wide collection of musicians he brings on board. Turner collaborates with many different artists and singers, both making full songs and brief poems which fit snugly between each song. As such, the at first daunting 18 tracks goes by a lot quicker than first anticipated. I'm grateful for that because I don't think the album would work if it was exceptionally long winded.

This is part of the key to the success of the album; you really don't know what will happen next. You're listening to fairly straight forward rock song and then, before you know it, you find yourself you're knee-deep in a Latin groove. I suppose what I'm wondering is where Monk Turner's voice is in all of this? I suspect that the album was his concept and that he directed its final outcome, but I don't know what he contributes to the actual song writing process. Not to say that he had no part of it, but I legitimately don't know. It seems that the diversity makes it difficult to hear what Turner's actual style is. Perhaps if I knew more of his earlier work I would be able to identify his contribution better. As it is, I imagine him looking through a kaleidoscope, harnessing the talent behind the album, but not controlling it. I might be wrong.

Although I at first hesitated regarding the poems, I found them a little cheesy, I actually found that they have been some of the more memorable moments of the album. Certain lines and rhythmic choices in them really stuck out to me and made me warm up to these poetic interludes. Hearing different poets give a spoken word speech about colours and their personalities is strangely charming. Image Silver being the silent rebel who is tired of being second to gold or Yellow being the odd one out, waiting for its time to shine. Sounds like it would have been fun to write.

Kaleidoscope is an album of vision and is full of great music. It's a surprising blend of genres that, in most other albums, might seen forced, but here they all seem to fall into place. Whether it be rock, jazz, or even hip-hop, the sounds never seem to clash or contradict one another. The more I listen to, the more I find myself intrigued by it and find myself immersed in the ambition of it. That being said, at first glance it doesn't come across as ambitious, but rather it just comes across as fun and easy music, being accessible and entertaining. But if you think about it a bit, to gather all of those voices and make them work together to make a single album, that's actually quite a feat.