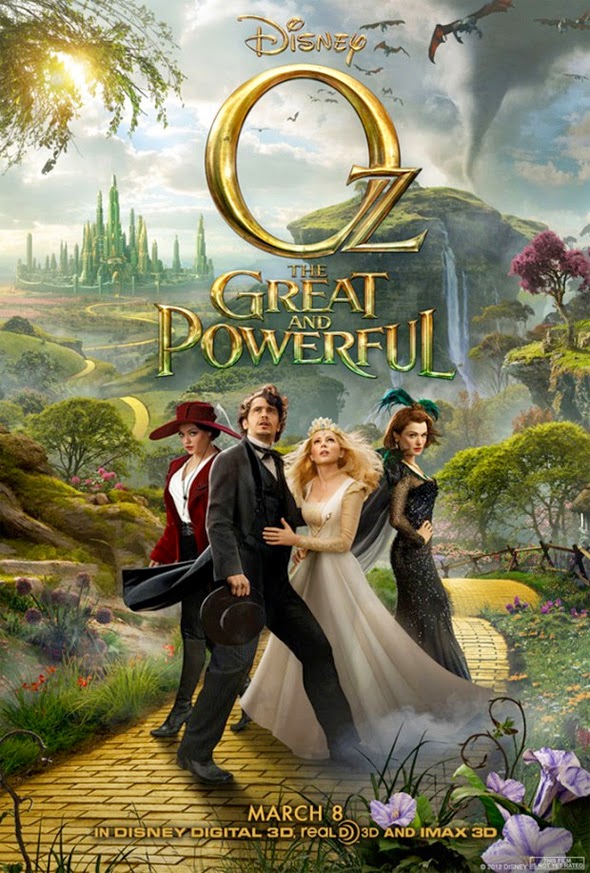 Just when you think that there's nothing original in Hollywood they go and prove you right. The latest addition to the group of retold fairy tales is non other than a prequel to the 1939 classic movie The Wizard of Oz. But of course, this criticism isn't too fair because the in reality, the original movie wasn't an original concept either as it was based on a book from 1900 by L. Frank Baum. I read the book when I was young and couldn't help but notice the differences between the two, particularly that the book was much more grim. It's just that nowadays, the movie is much more engraved in the memories of children and adults alike. At least with Oz The Great and Powerful, it is actually an original screenplay that is simply in the world that Baum created. It tells the story of how the title character The Wizard of Oz comes to the land of Oz.

Oscar Diggs (James Franco) starts in Kansas as a small time magician in a travelling circus. He lends his heart to any lady who comes his way, which gets him into some trouble and he finds himself in a hot air balloon trying to escape an enraged strong man. He gets away, only to swept up by a tornado (so it goes) and despite all odds he survives only to see that he isn't in Kansas anymore, though he doesn't say that outright. He stumbles right away into a witch named Theodora (Mila Kunis), who declares that he must the the wizard told in a prophesy who would save Oz from a wicked witch who killed the king of the land years before. Oz is not a real wizard, but he thinks she's hot so he goes with her story and wins her heart. So, she takes him to the Emerald City where he has to try and fool her older sister Evanora (Rachel Weisz) who sends him on a quest to kill the wicked witch.

Now... I saw Oz The Great and Powerful in 2D so perhaps I didn't get the maximum enjoyment out of it, after all, it proved to be a very visual movie. This is no surprise because as much as Oz is a prequel to The Wizard of Oz, it is just as much a follow-up to Tim Burton's Alice in Wonderland. This is Disney's attempt to do the same thing as that, but differently, this time with Evil Dead's Sam Raimi at the helm. But make no mistake, this is much more producer Joe Roth's film than it is Raimi's. You get the sense that Roth sat down with Raimi and said “Listen... I know times have been hard since you lost Spider-Man so trust me, these things worked for Alice In Wonderland, they will work here.” And it seems he's right; Oz has been a huge hit worldwide. Though to be fair, Sam still managed to work in cameos from his brother Ted and Bruce Campbell, though I missed them and read about it later. I digress...

I find that when you're making a movie for 3D presentation, it can be extremely short sighted and this is one of those cases where this is true. Seeing it in 2D was very distracting because you can see where things are supposed to be jumping out of the screen at you. Now, a movie's life in theatres is extremely small compared to its life at people's homes when they pick up the blu-ray or whatever... and 3D televisions don't seem to be catching on much to Hollywood's dismay. So, to pander to the medium seems like a mistake to me, and a very immediate one. I really felt like the whole introduction to the land of Oz was a distracting mess because of this. If it were done just a little differently, it would have been absolutely spectacular.

The acting in the film is very uneven. I'm not sure I'm sold on James Franco in this part, but he's a bit hit and miss as an actor. I used to dislike him, but I remember a few years back he took some really bold turns in films like Milk and 127 Hours made me reevaluate his abilities and rightly so. Here he is very theatrical, which works to some degree, but it doesn't feel like he brings honesty to the part when he needs to. I also wasn't too impressed with Mila Kunis, who I do often like, and Michelle Williams, who I don't know the work of well, but I know her to be an Oscar calibre actress, boasting several nominations through the last decade.

But let's be fair, there are a number of things that Oz the Great and Powerful got right and I don't mean to scare you away from the film. After the beginning I was starting to feel discouraged, but as the film continued, I started to get more on board with it. One of the characters working in the film's favour is Zach Braff's Finley, the flying monkey who Oz saves so he pledges a life debt to the faux-wizard. He gets a lot of laughs and you can tell that Braff had a great time playing him. I also enjoyed the Little China Girl who doesn't really get a name, nor does she contribute much to the story, but she is quite a fun character anyway. Both of these are all CG characters of course, which is a little disconcerting that they out perform the humans in the film. It also makes me miss the ingenuity that went into films before. In the 80's film Return to Oz, there are amazing visual characters that are a marvel to behold and they were all really there.

I'm focusing on the negatives again... let's get more positive. There are many clever homages to The Wizard of Oz and seeing them recreate a world that we are all familiar with really appeals to my nostalgic side. And it's fun to see how they get the characters to where they are when Dorothy arrives in Oz. It's like watching puzzle pieces come together and you start to see a picture form. The downside is that you know how the story is going to turn out in the end, but I guess that's the compromise one makes when it comes to prequels. Rather than surprises you get ah-ha moments as things become more familiar. This movie has plenty of those.

It is a very good adventure story, and while it not be high class entertainment, it makes for a very good evening out with the family. I can imagine that kids could really get swept up in the world of Oz as they no doubt did back in 1939. So, it got that right. Capturing the imagination of kids and transporting them into another world is exactly what L. Frank Baum wanted to do with Oz so this film understands that core objective and runs with that. And you know what, that's a good thing to do right.