Esthero - Everything Is Expensive (2012) 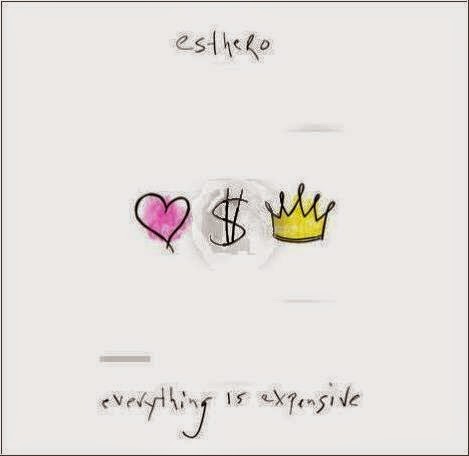 Do you remember Esthero? Back in 1997 she released her debut album Breath From Another which was supposed to be her big break and make her a new household name. I was quite young when it came out and I remember I really enjoyed her radio hit “That Girl.” Now, apparently the album didn't perform very well at the time, which is disappointing, but it seems that time has treated it well. What Esthero didn't get in record sales, she at least made up for it with acclaim and respect and has been an active figure in the music industry, co-writing and collaborating with countless artists over the years. Breath From Another is still held with very high regard from a lot of fans and is considered a classic album in the trip-hop and acid jazz genres. Doesn't really sound like a failure at all to me. Fast forward to 2005 when she released her second album Wikked Lil' Grrrls, which was a bold reinvention of her style, drifting from the slickly produced electronic music into pop-jazz territory. It was also a stunning album and also received frequent radio play, particularly in Canada. I can't really speak for American radio stations. But again, mainstream success evaded her, but I don't know if that was the goal so much, especially since the opening single of that album was “We R In Need of a Musical Revolution” which was a clear plea for better music on the radio. Understandably, I didn't hear that one on the radio much.

The point is that Esthero just doesn't seem to appeal as much to the masses, but that's never been a problem for me. Sometimes, if anything, I see that as a stamp of quality. But more importantly, she does resonate in the hearts and minds of her fans and they stay loyal, despite the long gaps between her full length albums. Something about her music is very personal and that rings true to many, and I count myself as one of those many fans. Since 2005, the music industry has changed dramatically and it appears that Esthero has seen that and has found ways to adapt to it. One can't rely on a successful radio single to shoot up record sales like it used to. And clearly, that never really was a way that worked for Esthero anyway.

The approach she took for the new album was very personal, something that she's always excelled at. To publicize the first single “Never Gonna Let You Go,” she posted it on her new Youtube channel and actually took the time to respond to many of the comments left there, for better or for worse. She also went through Youtube on many of the videos of her pre-existing songs and thanked people on those threads who left sweet and personal comments toward her music. Similarly, she kept in touch with fans through her Twitter feed, gladly retweeting promotion and comments, and responding to her fans, strengthening that connection between musician and listener. At that point she started a PledgeMusic campaign, similar to a Kickstarter project, where she asked fans to help her out now that the album was completed. Esthero's plan was to self distribute the album around the world, though Universal music would distribute it around Canada, and to do that she would need financial assistance. So, she raised the money and gave a whole bunch of unique perks to those who helped fund the campaign, including hand made bags and finger paintings on top of the CD or vinyl versions of the album. I was one of the contributors. I have helped with quite a few funding campaigns over the last couple of years and I have to admit that this was one of the most personal ones I've been a part of. It's been a really great experience seeing this album get released because Esthero entered the process with such humility and gratitude, it makes the album a better experience because we see her humanity even before a note hits our ears.

I guess I should talk about the music at this point, after all, I'm not reviewing her person. I want to judge the album fairly based on the music that she's written. Its presentation and release is just a bonus. And once again, Esthero changes her style. The trip-hop sound of her early career has faded and the jazz overtones her 2005 album are all but gone. Now we're presented with a more pop version of Esthero, but not in a glossy over the top way; it all seems rather stripped down. While her previous albums had a very consistent and focused vision, Everything Is Expensive offers a collection of diverse tunes of a very visceral nature. At times it's very tender, like the mostly acoustic “Black Mermaid” and the emotional piano ballad “Go.” At other moments it can be jarringly blunt, as in the bitter “You Don't Get A Song,” which is a song that will connect with some, but it a bit off putting for me because... well, like I said, it's blunt. It dispatches with poetics and goes right for the punch.

There are some very simple ideas in the songs that have been fully expressed. The songs start off fairly basic and just very naturally evolve and change in ways that keep it feeling fresh and exciting. “Gracefully” and “Walking on Eggshells” are some superb tracks on the album, but there is nothing obviously impressive about them. Just simple pop hooks that are given room to breath and are energized through Esthero's soulful voice. But something about them keeps calling me back and I find them to be some of the album's strongest moments.

The opening single “Never Gonna Let Your Go” was a track that stirred up some attention on Youtube, but not always in a good way. A lot of people really liked it, but some folks called the track a sell out or just expressed being underwhelmed, and I can somewhat understand that. I was a little on the fence about it myself. I think it is the most obvious pop song on here, which makes sense for it to be the lead single. But I have to admit that within the context of the album, the song works well and starts to make sense. After that we get to hear Esthero stroll into rock territory with “Supernatural” and “Francis,” which is a genre that she hasn't ventured into very often. I'm glad she has now.

She gets to stretch out into more artsy sounds also, with the jazzy bass dominated “How Do I Get You Alone,” which uses autotune in such a way that it benefits the song rather than just feeling like a conformity to pop norms. The title track takes its time to build into a smooth, electronic groove. It's a smart and satisfying piece that avoids typical songwriting formats, but eases into its itself. Esthero has always made music that has pop charm in it, while being bold and intelligent. You can make music that's artistically satisfying while remaining accessible. That's what her call for a “musical revolution” back in 2005 was all about, wasn't it?

People who are looking for an album like Breath From Another will walk away disappointed, but that's fine. You can't expect an artists to repeat themselves 14 years later. I will say this, the second time I listened to Everything Is Expensive was better than the first time. The third time was better than that. I think that it works because it really feels like Esthero made the album she wanted to and poured herself into it. It is very honest and real and it shows. Of course, that's what has always made Esthero stand out above the lacklustre pop princesses that have come and gone. An honest relationship with your listeners is all that one can hope for in today's music world and that is why her fans have been patient and invested in her music. Esthero is very lucky to have her fans, but us fans are also lucky to have Esthero.