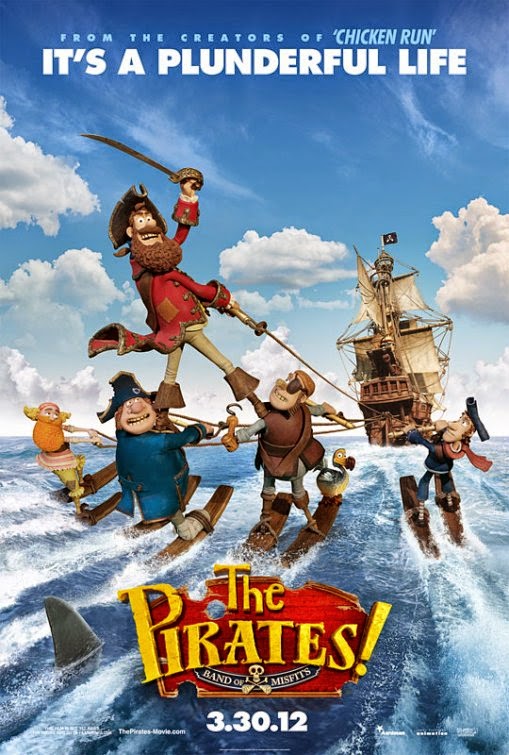 I'm not going to bury any sort of lead here. I really love Aardman studios and I have since I was a kid and watched their classic Wallace and Gromit cartoons. I always admired their brilliant stop motion animation and was a little disappointed when they decided to conform to standard CG animation, even if Flushed Away was modelled after their token character designs. Still, their story telling and quirky sense of humour usually wins through and that certainly is the case with The Pirates! Band of Misfits. This also marks a return to form for the studio as they have returned to their stop motion roots, incorporating CG animation for some of the special effects only.

It follows the pirate captain, The Pirate Captain (Hugh Grant) and his crew as they take on a new challenge: to get the captain the pirate of the year award for the first time in his career. So, as they go looting to get enough treasure to earn them the award, they start to realize that getting booty is harder than they thought. That's when they meet the scientist Charles Darwin (David Tennant) who notices that their parrot Polly isn't actually a parrot, but the thought to be extinct dodo bird. Darwin persuades the Pirate Captain to come to London to present Polly at a scientist convention where they can earn a prize. However, Queen Victoria (Imelda Staunton), determined to have Britain rule the high seas, loathes pirates and if the pirate crew are discovered, she will take their heads.

While I didn't think this was as strong as some of the previous Aardman releases, it certainly is a charming and funny film that both kids and adults can enjoy. I think where it falls short is on the actual story. And it's not that it's a bad story, it's just that it falls short compared to other aspects of the movie, especially considering it's clear that the writing team is very talented. The dialogue is clever and often very funny, and the characters are a lot of fun and fairly diverse. I suppose the problem is that the story has too much focus on The Pirate Captain and Charles Darwin. I feel that his crew don't get quite enough attention even though they are quite entertaining, especially as an ensemble.

Nevertheless, as I stated, the writing is great and their voice cast does quite well with it. There are superb lines, which poke fun at piracy and people's strange fascination with the shady characters. Historically speaking, pirates were known to do nasty things and this movie has a few lines that acknowledge that so the humour goes a little dark at times. The kids won't care and the adults will be amused. I know I was. This was the case for much of the movie. Usually the big picture of the movie is what I'm most concerned with, but the charm of this film was in all of the little details. Whether it's a passing bit of dialogue or a subtle visual gag, there is a lot happening in this film that is quite entertaining. It's probably worth seeing more than once just so you can catch everything.

The voice actors had a lot of fun and you can tell from their performances. Despite knowing that it was Hugh Grant behind The Pirate Captain's voice, when watching the movie I couldn't really put his face to the character. It's great because I rarely get to see (or hear) Hugh Grant do something other than being Hugh Grant. In The Pirates, you really feel that he takes on a character and disappears in it. We also get a lighthearted turn from Brendan Gleeson, who plays one of the crew, The Pirate with Gout. Oh yeah, as you may have noticed, the main pirate crew only have titles, not names. I really enjoy this for some reason.

The animation is pretty superb, which I've come to expect from Aardman studios. But this is one of their finest works in that regard. The process of stop motion is still very fascinating to me, especially from the perspective of a film maker. The technical side of it is very interesting, but rather simple on a conceptual level, though in practice it seems unimaginably difficult. But what really impresses me is that they are able to convey emotions so well and pace their stories as well as they do. It's the fact that they literally take pieces of clay and turn them into unique and expressive characters that really impresses me. I can't even imagine that amount of planning, practice and patience it would take to make a feature with this technique. That is a bit of movie magic that remains quite wondrous to me.