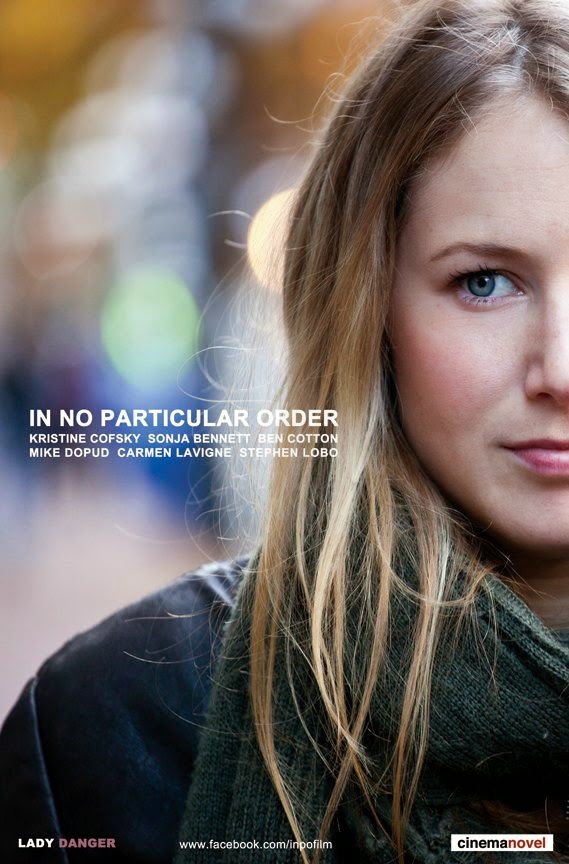 As I did last year, I wanted to make sure that this year at the Vancouver International Film Festival, that I watched at least one Canadian made film because I like supporting Canadian cinema, when it's actually good anyway. I went to see In No Particular Order for a couple of reasons. First, I found out that one of my teachers in film school, Byron Lamarque, was the movie's cinematographer. Second, its showing actually fit really well into my schedule. So I went to watch it on its second showing on an early Thursday afternoon and was pleased to see a very healthy amount of support for the film, nearly filling up the modest sized theatre, which is a pretty good achievement. Filmed in Vancouver, this film really felt like a piece of local art and I was glad that it saw its screening at our biggest film festival.

Sarah (Kristine Cofsky) is a twenty-something girl who can't seem to get free of her bad habits. She works two jobs, a barista by day and bartender by night, the latter leading into nights of drinking and sleeping around. Her irresponsibility gets her into some trouble at her sister, Claire's (Sonja Bennett) wedding where, after promising not to get drunk and not following through with that promise, she has sex with a married man. The two part ways, but she does find a romance with the best man of the wedding, someone she had a brief sexual encounter previously, Ryan (Ben Cotton), who tries to build their relationship on stronger ground than before, with stuff like talking, hanging out, and maybe even some actual romance. But that encounter with the married man still lingers with her...

Why In No Particular Order works as well as it does is because it comes across as very honest, seeming like a very real struggle that a number of wandering twenty-somethings in our generation are going through. I think that we are a generation that lacks commitment and responsibility and this film diagnosis that, and while not necessarily presenting a solution, at the very least we get to see a portrayal of that struggle and realize that we're not alone in facing this disconnect from the burdens of real life. Yet, the film doesn't come across as judgemental; it simply shows us what Sarah's life is like at time time of her life.

Sarah is a precarious character, teetering on the verge of being unlikeable, but Kristine Cofsky does a great job at keeping her charismatic, but believably flawed. We see that she tries so hard to make good choices, but seems naturally drawn to bad ones. Not everyone can perform such a balancing act as it's easy to sway in the direction of being pathetic to watch or not really believable in the struggle. Cofsky, who also wrote and directed the film, seems to understand what it is that draws Sarah to her bad decisions, but knows that a person isn't necessarily defined by their lifestyle, unless they are fully overtaken by it. What keeps the film compelling is that Sarah has not been overtaken and so we retain hope that she can change and follow through with her romance with Ryan and that she can maintain a healthy relationship with her sister.

What I like about In No Particular Order is that it's a modest production, but was done well thanks to a script that maintains a smart level of humour and humanity, and a cast that can perform well with their material. It is clearly a low budget feature, but it doesn't feel like the story was impaired or in any way compromised for it. There is a level of professionalism apparent despite the budget confines. This is encouraging to me because I think with my level of knowledge, I could make a film like this. It's done very well, but it's not unobtainable in its scope. Not to say that making a film of this calibre wouldn't be challenging, because it certainly would be, but if you watch primarily Hollywood mainstream cinema, it often feels like something that is completely unreachable. This film is not unreachable, but it is good.