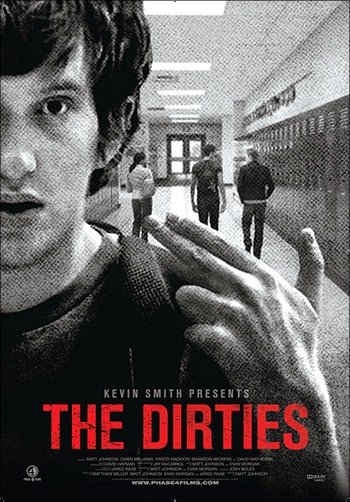 It's that time of year again! That time when I get excited and go see a handful of films that I may not get a chance to see any other time. It's the Vancouver International Film Festival, where film makers from all over the world are represented in a showcase of over 100 something films. It tends to be quite different from Canada's more famous Toronto Film Festival, showcasing less commercial picks and more artistically focused films. I tend to to quite like the shows that I see there so I'm taking this opportunity to jump back into reviewing movies after a three month hiatus.

The first film I was to cover is The Dirties, easily my favourite film of the bunch that I've seen this year at VIFF. Matt and Owen (Matt Johnson and Owen Williams respectively) are not the popular kids in high school and find themselves bullied by their peers daily. But the two of them are inseparable friends and share a vision of making movies. But when their video project that they make for a class is so poorly received from their classmates, they dream up their next film project which blurs the line between fact and fiction. Matt's plan is to really shoot up the bullies in the school, but only the bullies of course, and film that to create an actual real climax for his film. Owen... well, he's got reservations about it.

What's great about The Dirties is that it is designed to make the audience wonder about how much truth there is in the story. The line between fantasy and reality is blurred for the audience, just as it is Matt. Matt is so plugged into cinema and its culture that he does not have a healthy grip on reality. Matt Johnson, who also directs the picture, sells his character well; the success of the film depends on this. The audience is along for the ride because it is presented as raw footage of their movie. It looks and feels like it and is even played with and edited in the movie as Matt works on the fictional “The Dirties” movie. It's a clever way to make a believable film on a shoestring budget.

This is their debut feature film and they wanted to make something that would draw some attention to them and this is a great route to take. It deals with some pretty heavy issues that is humourous, but thankfully not in a way that is disrespectful. In fact, it really puts a human face on kids that are pushed to the edge and consider taking matters into their own hands. School shootings are no laughing matter, but I think drawing the connections between man and monster brings some clarity to the subject allowing some deeper understanding into what makes youth hurt to the point of wanting to hurt back.

Meanwhile, it also shows the dangers of being too plugged into media. One of the problems with Matt is that he doesn't have a grip on reality. Life is a movie and everything in life should reference his favourite movies. There are no safe boundaries between fact and fiction. We don't get too much a picture of his home life apart from some distant and out of touch interactions with his mother, but you get the sense that he was raised by a television. His parents are blissfully naive, but you get the sense that they aren't listening to Matt about his bullying problem. Owen is a little more grounded, even finding some joy in reality as he starts to warm up to a pretty girl at school named Chrissy (Krista Madison).

You know, The Dirties is actually a pretty good representation of modern high school. It looks and feels very real and very familiar. That realism is crucial to the film's success and I think that these two lead actors have a very natural screen presence that never feels like 'acting.' While this film is inherently hilarious, there is a sort of darkness about it. The comedy keeps you watching, but it's the deep emotional resonance of the film that makes it stay with you.

I'm excited to see where these film makers go next. The Dirties has had a pretty successful festival run and I imagine that it will become a bit of a cult success after that. I look forward to seeing this movie again and sharing with others. It should be seen by all indie film makers who want an example of great film making on a low budget. It's worth getting excited for.