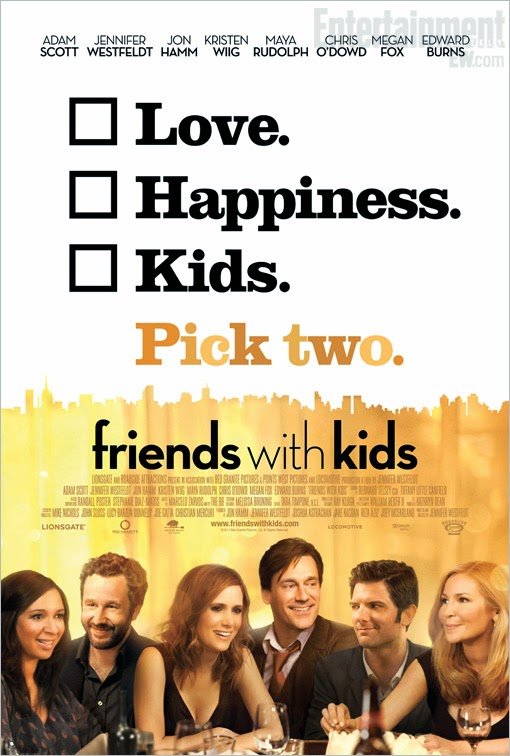 I saw the film Friends With Kids on a whim. And the selling point was a little random. I've been watching a British comedy lately called The IT Crowd and on this show there is an Irish character named Roy, who I really enjoy. He is played by Chris O'Dowd, who is also in Friends With Kids, sans Irish accent. And that's why I went to watch it. That and it stars Adam Scott who I really enjoyed in the series Party Down. Friends With Kids is about marriage and love and about trying to find and keep romance in the chaos of life, which I'm sure a good portion of today's generation can connect with.

It follows Jason (Adam Scott) and Julie (Jennifer Westfeldt), two good friends who find out that their best friends are pregnant and start raising families. Neither Jason nor Julie are attached to anyone romantically, but are really scared of the notion of having kids as their friends' lives seem to be in shambles from the whole family situation. But Julie is starting to feel the clock ticking and the two comes up with a plan to have the kids, but not fall out of love with their spouses. This is by not having spouses and instead having the child together. They would live separately, but split the child responsibilities 50/50. Jason, agrees and has a kid with his friend... and of course they're totally not in love and it won't get complicated at all.

Friends With Kids is fascinating because it both challenges and reaffirms our notions of traditional love and families. The ensemble film gives us a look at several relationships and some of the challenges and joys that come with their situations. It's smart not to take a single stance, but rather explores the possibilities and allows us to examine the right and wrong doings of each character. The men aren't bad guys and the women aren't flat stereotypes; everyone is fairly well rounded. This is one of the movie's key strengths and much of the credit goes to, not only the actors, but also writer and first time director Jennifer Westfeldt, who started to get some attention ten years ago when she had a minor indie hit with the movie Kissing Jessica Stein, which she co-wrote and starred in.

She is a good writer, but at times it feels like she's trying to hard to write “authentic” dialogue. There are times where it's unnecessarily crass, which I'm not always bothered by, but at times it feels like the dialogue is trying too hard to be edgy when in reality it really doesn't need to be. The story and characters are enough to keep the film interesting. It does seem to be something a lot of filmmakers fall back on. The idea that excess makes a better or more legitimate depiction of reality, when often films are more successful for exercising restraint. This is only sometimes a problem in Friends With Kids, but does reflect a trend in cinema.

With Westfeldt also starring in the film, she brings in an amusing self deprecating humour to it. But it wouldn't work without the chemistry with her fellow actors, particularly Adam Scott, who has mastered the man who hides under a confident shield. Separately, they are charming and quirky, but together they are very fun to watch and that pairing goes a long way.

On the downside, I feel that the story doesn't play out to its fullest. The story seems to reach an emotional climax, and that's only the end of the second half. It sadly leaves the final act lacking, though not entirely boring. We can make it to the end of the movie because we've journeyed with the characters this far. I also feel like the supporting cast gets sadly neglected in this last portion of the film, which is a shame because they played such an important part into how the story plays out up until then. I feel like they should have had a much more significant send off.

I don't think that I loved Friends With Kids, but it did make me laugh and I believe that there is a an audience for the movie. A couple who managed to get their kids to bed and are looking for an evening to relax with one another will likely find themselves relating to this movie, in both good and bad ways, which shows that at the very least the script is honest. If a movie can be honest and make us laugh, it got something right.