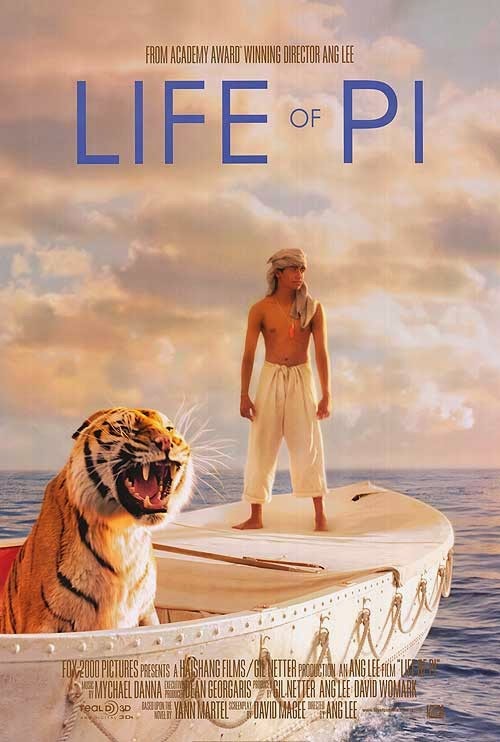 I don't like Ang Lee. Not personally, of course, but I don't think I've walked away from one of his movies and been really impressed. I'm sure he's an alright person. Brokeback Mountain was tedious and overrated. Hulk was hilariously bad. Even his classic Crouching Tiger Hidden Dragon I only felt was alright. So, while I would be curious to see an adaptation of Life of Pi, you'll have to forgive my scepticism when I heard that Ang Lee was directing it. Although, I will give him this: he's at least got a very diverse filmography so that's worth something. I have to admit that the trailers of this movie were wondrous though. Such imagery and visual effects were quite appealing and supposedly the 3D used would be groundbreaking and the best usage of the format since... I don't know. Everyone says “since Avatar” but not everything can be the best since Avatar. I was interested in seeing the film, but I haven't read the popular novel and I only vaguely know what it's about.

It follows the life of Pi, imagine that. He grew up in India with his parents and older brother in a zoo, in that they were the owners. But times have gotten tough and his parents decide that it's time to leave India and start a new life in Canada. They plan to sell the animals there and, with the money, start a new living. Pi isn't too happy about it, but has to go. On the ship there though, there is a terrible storm which causes it to go down and Pi, by chance, makes it onto a lifeboat with a few of the animals from on board. Unfortunately, they don't make it due to one of them being a hyena, which gets overtaken by the tiger that was hiding out on the boat. So, it's just Pi and and the tiger out in the middle of the ocean with no sign of any other survivors or any sort of rescue.

One of the easiest things to praise the film for is its visuals, but also not in the way you might think. Was the 3D overrated? Oh yeah. There are two outcomes when I go out and watch a 3D film. First, it looks bad and distracts me through the entire film. The next is if it's actually well done 3D, like this film is, it's a little jarring at first and then I get used to it and hardly notice it anymore. It never feels worth the extra charge. But the actual visual effects, the animals and the storms especially, were remarkable and a real treat for the eye. That's clearly where the majority of the budget went and we can say that it was used well.

Lee took a gamble and avoided using recognizable actors in the film, which is fine by me because there really weren't too many opportunities for big stars anyway. Most of the film features only Pi and the tiger and, unfortunately, I know very few big name young Indian actors and even fewer famous tigers. I am glad that they decided to stay true to the book and stay with the proper characterization. And with this sort of project, I imagine that it will do just fine because the book is a popular enough piece of literature that it doesn't need a big actor to encourage audiences to see it. The pick of Suraj Sharma as young Pi was inspired and worked very well. Then of course there is younger Pi and youngest Pi, but they didn't hold most of the film. One man shows can be hard to pull off even with seasoned actors, and it worked very well with Tom Hanks in Cast Away, but to have that as your debut acting role is a lot of weight on your shoulders. I would see it as a challenge for Hanks, but the fact that Sharma did as well as he did is pretty impressive. Though he plays against a tiger, not a volleyball.

The relationship between the tiger, named Richard Parker, and Pi is probably what works the best in the film. It raises not only the survival stakes of the character, but also the emotional stakes of the whole movie. I connected with their strange relationship and their struggle to connect in the most unusual of circumstances. I suppose I have a bias toward this simply because I find tigers to be amazing animals so to see one struggle tugs at my heart strings, but I don't imagine that one needs to be a huge tiger fan to understand the complex relationship between animal and human.

Life of Pi also deals with some inner conflict within Pi, as we get a chance to see his sanity degrade as he struggles to survive. There is something fascinating about seeing the inner turmoil of a character and his coping mechanisms for his difficult situation, to put it mildly. It winds up being a beautiful spiritual journey by the time the movie comes to an end, though what sort of spiritual journey is a little uncertain. It seems that the film doesn't take a particular stance on what it has to say and I think that's a little off-putting to me, but only slightly. At the very least it is willing to explore spiritually, though I suppose that's unavoidable considering that one of Pi's main unique character traits is his unusual religious combinations.

In any case, this is a very well paced and emotionally driven movie which is the most important thing for me. For a film that almost entirely takes place on a boat, it is really good at keeping the story moving and keeping the audience interested. That's always a fine balancing act. It's the first time I've walked away from an Ang Lee film and thought that it was a really good watch. I believe that we'll be hearing a lot from this one come Oscar season, and I think at the very least it should get the special effects award, though cinematography would seem appropriate too. Life of Pi is one to see this season.