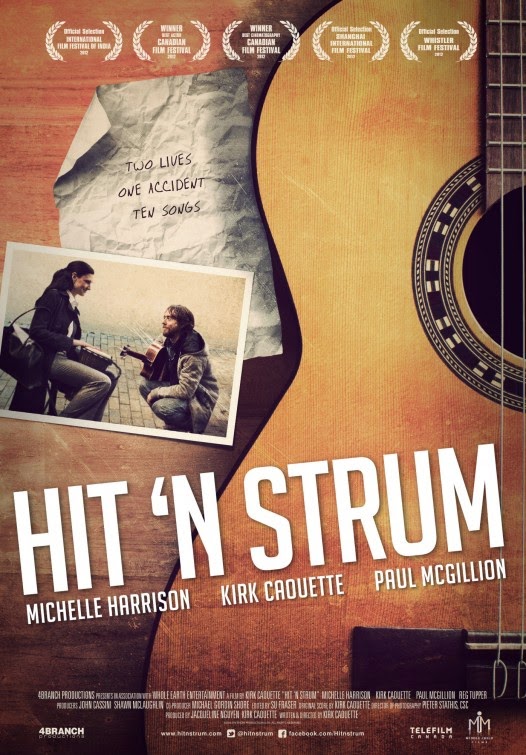 I finally got a chance to watch a local film that gathered some buzz around film festivals and finally got a very limited theatrical release just this last month. I didn't know much about this independent picture, but after reading a bit about it, it truly in a local Vancouver film at heart, telling the story of a homeless street busker in Vancouver's downtown east side, the infamously poor neighbourhood. Also, I lived there so it's only natural that I would take interest in a movie filmed and taking place in my old neighbourhood, often in Gastown but sometimes literally across the street from my apartment. Hey, the rent was cheap. These reviews don't exactly pay the bills. Another thing that piqued my interest was that it was apparently inspired by a local busker named Andre, who I actually knew pretty well a few years ago. I used to do an outreach program down here before I moved into the neighbourhood. He even gave me guitar lessons for a while. Haven't seen him much in recent years though.

The movie starts with Stephanie (Michelle Harrison), who is a fairly typical irresponsible Vancouver driver and while not paying much attention to the road she hits a homeless man named Mike (Kirk Caouette). He is alive and able to stand, but still in a panic, she drives off. But as days pass and she in unable to get the situation out of her mind, she sees Mike around the city as he busks around where she works. Wanting to make the situation right and without money being any sort of object, she buys Mike a guitar as a peace offering, though he rejects it; he already has a guitar that he loves after all. But Stephanie keeps pushing into Mike's life as she tries to get his music heard and get him off the streets.

Hit 'n Strum certainly is a well intentioned movie, but in some ways fairly disappointing mainly because for a story about homelessness, it sure avoids the real deep issues that propel the issues of Vancouver's downtown east side. It's a quaint idea, but I highly doubt that Mike would really be drug free. I'm sure there are a lot of people down here who say their clean and just want a meal or a cup of coffee, but I'm jaded. I was down here too long and have had my generosity taken advantage of too many times to watch this movie and believe that Mike is being straight with Stephanie. He sees that she has an endless supply of money and is blinded enough by her own wrong doing that she'll buy him food and a studio gig. Let me tell you, I've rarely talked to a homeless person who hasn't pushed for a little more. But okay, fair enough, that opens the door to a completely different movie. Let's get back to this one. Alright, it's fiction and Stephanie happened to hit the only clean street person in the city. Sure, okay.

The story is fine. The characters change in subtle ways, but they do grow from the time they spend with one another and that's important. Stephanie isn't the most interesting female protagonist I've seen in cinema lately, but she is at least conflicted and well intentioned. I'm glad that it focuses on the point of view of a driver who has been a part of a hit and run situation. It's a relevant issue as I've seen plenty of memorials of homeless people who were mowed down by drivers on Hastings street, so much so that for much of the stretch they reduced the speed limit to 30kph. It's interesting to explore that guilt that they carry, and Stephanie is lucky that Mike survived and was relatively unharmed.

I suppose that she is a conduit for those like her who are watching the movie and know basically nothing about the homeless issue in Vancouver. Some of them ask for change or food and sometimes play music, but what else do they know about these people really? The film does address the issue of the common person ignoring homeless people and to some degree I can commend the film for that. It entertains that fantasy some of us like to have where we want to save somebody from their situation and the easiest way to do that would be to throw some money at the problem. Of course, since Mike isn't addicted to drugs, it does actually help. Well, again, I don't mean to pick, but I literally knew a guy who won the lottery and was still homeless because... well, maybe he wasn't so good with money and had some expensive habits. I'm sure it was a fun ride while it lasted though.

I've seen this sort of movie before though and told a little bit better. It heavily resembles the 2006 Irish film Once, which is another busker to legitimate musician story which is more emotionally poignant and, sorry to say, has better music. Not to put down the songs that writer/director/actor Kirk Caouette wrote and performed for this movie. The soundtrack is nice enough, but the script emphasizes how amazing his music constantly and what I hear is pretty good at its best, though never terrible. It does show Caouette to be a talent on multiple levels though. His primary film credits before this movie are primarily in the stunt department, which I guess means that he was really hit by the car at the beginning of the film and just knew how to take it and sell it. This is his first feature film as writer and director and it's an admirable and ambitious project to take on.

I hope not to dissuade you too much from seeing the film. Hit 'n Strum does try and partially succeed. It's quaint and all rather nice and that just didn't come across as a truth about Vancouver and the homeless problem down here to me. But he does make it seem sincere and personal. If he didn't want to make the gritty east side film, I shouldn't expect it out of him. I suppose that's one I'm going to have to make in the future and it will have a different impact and that's okay.