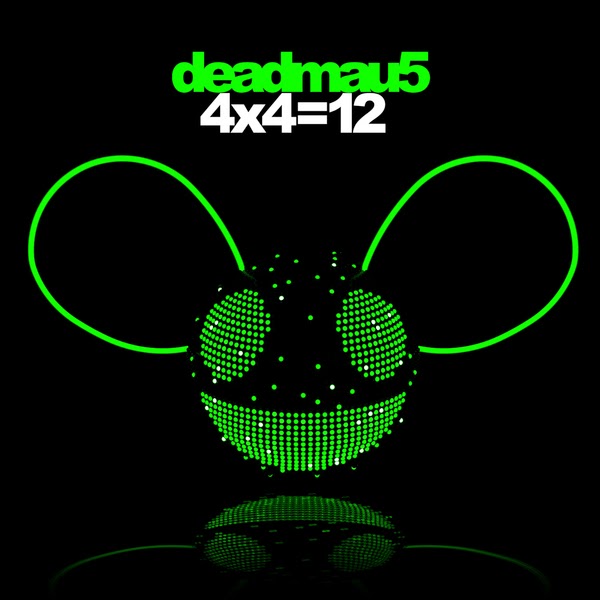 I don't know if you're aware of this, but the kids these days are getting quite into the “dubstep,” though it's a genre I'm having a tough time getting into myself. Electronic music is expanding and being experimented with in various forms and one of the frontrunners in taking it into a sort of progressive house and dubstep direction is Deadmau5 (pronounced Dead Mouse) who has gained a very intimidating following over the last few years. Based in Toronto, Canada, he is a home grown artist who is gaining some international recognition. One of the things he is most famous for is wearing his iconic mouse head on stage as he performs. I guess that's one way to make your show memorable.

4x4=12 is his Deadmau5's fifth album... arguably. It's actually hard to tell if you look at his discography because he had a lot of independent releases through the years. It's his third album since he broke into the mainstream anyway. While it gained a lot of positive reviews and critical attention, I warn you that my review from this point on doesn't shine a particularly bright light on his music. I understand that he has some very hard core fans, but I have to confess that I don't really see the appeal based on this album.

Okay, that's not completely true. I would say that there are some pretty good moments. I think it starts with some promise with the first track “Some Chords.” “Right This Second” is also a stronger track, displaying a little more than the typical repetitive beats that some of these songs find themselves locked into. Arguably one of the strongest tracks is “Raise Your Weapon” which starts off as a very calm piano driven piece with a lady's voice singing, but moves into a very experimental hard beat, but the results are fairly pleasing at it meets the more accessible and abrasive sides of the genre.

Though, even these songs fall victim to the flaws of the album and Deadmau5's music in general. Ultimately the problem is that many of the tracks are long winded and rely too much on the beat. Just because the artist likes their beat enough to put it on loop for ten minutes straight, doesn't mean that a listener will love it just the same. You need to give your audience a reason to keep listening, and in the absolutely brutally long “Cthulhu Sleeps” I was able to skip 3 minutes of the song and it didn't feel like I missed anything. Shame, I really like the title.

The problem when the artist becomes too fixated in the beat, is that it misses out on the other elements that make music appealing. This has been a problem with electronic music from the moment clubs started playing techno, and many artists have been trying their bests to shake the issue, or at least augment it so that it's not as much of a problem. The issue isn't the beat, but the lack of musicality on top of it. Most of the time I find myself disconnected from the music on the album and often I can't lock onto the emotional core of the song. When electronic artists succeed at making an emotionally powerful song, I give them major credit. Deadmau5's music doesn't really connect with me.

Of course, perhaps this comes down to a matter of preference (well, I suppose that goes for all music). People who listen to music for a good beat and something to dance to will likely get something out of 4x4=12. People who like strange, abrasive noises in their music will also find something to enjoy. But I listen to music because it makes me feel something. Whether it be excitement, melancholy, joy or peace, I need to find something in the music that makes me feel. There were moments where the music
instilled an emotional reaction, but more often than not, I found myself bored.

Fans of Deadmau5 will likely get what they're hoping for from this album. I hear that his strength as a musician comes out predominantly in his live shows, where he wins fans and sells out shows, but the record itself leaves me with a very ho-hum reaction. I can't help but feel that most of these tunes are just skeletons for better songs that have yet to be completely realized, but maybe that's an offensive thing to say to a Deadmau5 fan. I would hope though, that the artist would see that not as an insult, but a challenge to better himself an his music. Best of luck Deadmau5.