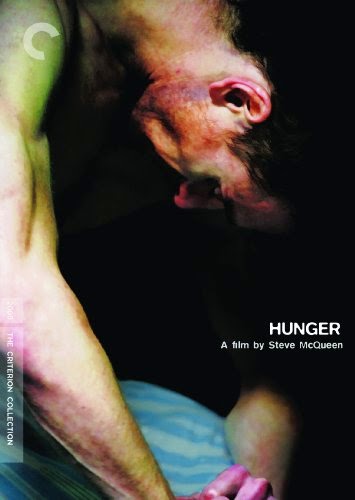 A few months ago I took a risk and went out to see Shame, which was supposed to be a big Oscar contender, though wound up being ignored come award season. I found that to be an extremely effective film, mostly for Michael Fassbender's performance. So, I took an interest in the actor and was interested in seeing some of his more meaty roles. And one of the films that caught my attention was the film Hunger from 2008, which also paired up Fassbender and director Steve McQueen. This film is a very different kind of movie from Shame. McQueen doesn't shy away from tough subject matter it seems. Hunger however, tackles a very different subject.

The film takes place inside the Maze Prison in 1976 where several IRA members were imprisoned. With their political status removed, they were no longer allowed to wear their own clothes. Those who refused to wear the prison uniforms were stripped naked and given only a blanket to wear in their small, dirty cells. So, they begin a no wash protest. After being forcefully cleaned and have their hair cut by the guards, they move onto a hunger strike lead by Bobby Sands (Michael Fassbender) where they starve themselves to death one by one until the British government met their demands and gave them back their political status.

The story is told in a very unusual way and, while there are moments of exposition, one might need to know a bit more history about the IRA in the 1970s in order to understand the back story of the film. I only know portions of the history of the organization so I wasn't sure a lot of the time of the significance of their struggle. But the film works anyway because it really isn't about the IRA and their political struggle. The movie is smart not to take sides on this issue, but it's really about the poor prison conditions which these men had to face and the great lengths they would go to have their rights acknowledged.

And there is no way around it, this film is brutal. It' a completely unflinching recreation of these conditions. It doesn't butter anything up, and if it does, it's pretty unimaginable what they would have gone through. Hunger is not a film to entertain, but to educate. It is used as a tool to inform future generations of a dark time in Britain's history so that we might not make that mistake again. We see brutal beatings, unfathomably dirty living conditions, and of course, the physical results of a man starving himself. This movie doesn't pull its punches, nor should it. That would negate the purpose of it since it's not here to entertain us.

The film has very little dialogue for the most part. Much of the story is presented visually, though there is a very notable scene where they break from this and take a completely different approach. More than half way through the movie a priest visits Bobby Sands and tries to talk him out of the hunger strike. There is a long 24 minute dialogue between the two, the first 17 minutes of which are without a single cut. It's a simple set up of one actor face to face to another. It's just them, a table and cigarettes and what is remarkable is that the scene is never boring. The dialogue feels very natural and is crucial to keeping the film together. It's our only chance to really get some insight into the characters' motivations.

For all that there is to admire in Hunger, it is an exceptionally difficult movie to get through. Like I said, it's not made for enjoyment. If the movie did not challenge its viewer than the struggle of the characters would be worthless. So, was it a worthwhile movie to see? Absolutely. Would I watch it again? Unlikely. Did I like it? I don't really know. I think that it was an important movie to make and addressed some very important issues. One must admire McQueen's boldness in taking on a film like this, particularly as a debut feature. Given the subject matter, I would imagine that keeping the political aspect on the back burner must have been a challenge, which is probably why the dialogue is minimal. It just paints a very successful picture of the prisons that these men had to suffer through. It's bare knuckle film making; no sides, just the raw events and how they played out.