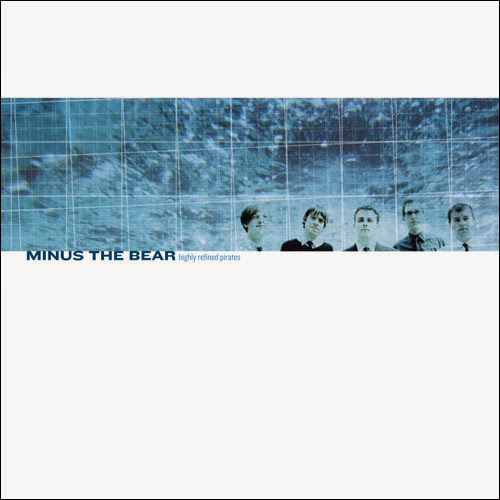 After the release of This Is What I Know About Being Gigantic, Minus The Bear began work on their first full length album. Before that there would be another EP called Bands Like It When You Yell “Yar!” At Them, which is a statement I can't confirm, but the band are probably better suited to make such a claim anyway. I didn't want to review that one because unlike ...Being Gigantic, that one was primarily a preview EP, sharing two of the songs on the full album as well as a demo version of a song. There are only two unique tracks and it is under 4 minutes of material, though I will say that I enjoy them.

Highly Refined Pirates is an album that has really stuck with me over the years in a way that I would not have anticipated when I first heard the material. A friend of mine sent me the opening track “Thanks For The Killer Game of Crisco® Twister,” which I enjoyed quite a bit. It encapsulates what kind of music the band were making at this time; songs about partying, good times, and women, but in a strangely tactful way compared to much of pop music. It is the most pure example of their double-tap guitar playing method and the distinct sound it makes. I remember that after that I wanted to hear more songs so she sent me a few more from the album. I must confess that I wasn't initially impressed, but that changed very quickly. At first it seemed that most of the songs sounded the same, and I can see why I thought that to some degree. There is a very consistent tone to the album and their sounds takes a little bit of getting used to. It didn't take long though before the songs grew distinct and I started to really appreciate each of them.

While their sound is consistent, it is very flexible. They constantly avoid formula and play around with structure and different time signatures. A great example of this is the track “Absinthe Party at the Fly Honey Warehouse” which has a long, swelling minute long introduction before the song really gets into the content, and it works well to build the song up.

There are also several instrumental transitional tracks, but quite different than the ones on This is What I Know About Being Gigantic in that they tend to be quite brief and don't delve too much into electronic music, relying more in gentle guitar work and ambiance. They are well spaced out in the album and give the listener gentle breaks from their fast paced songs. Also, a couple of them contain reverences to Starship Troopers in the titles, a movie the band must be fans of.

One of the album highlights is the phenomenal “Get Me Naked 2: Electric Boogaloo” which has been a favourite song of mine for years. I can't express my enthusiasm for this track enough. The lyrics talk about insomnia and the stresses of modern life and the lines in the chorus are so catchy, clever and relatable that you can't help but remember them: “You said, 'my life's like a bad movie.' I said 'that's true of all of us.'” It also marks one of the only songs by the band that has a female back up singer, which adds an interesting uniqueness to the song. The song goes through so many movements that just feel so natural that one can forget to admire the superb songwriting that went into the creation of it because, above all else, it's fun and easy to connect with.

It is followed by the more romantic and nostalgic “We Are Not A Football Team” which is a much slower, but very welcome track. It shows a different, more contemplative side of the band. This is also reflected in one of their later tracks “I Lost All My Money At The Cock Fights” which explores the excitement of a brand new attraction. The song starts off calm and collected, but near the end it changes quite dramatically into a high energy finale.

The album has a great final act as their charming instrumental “Andy Wolff” skips gleefully into the final(ish) track, “Let's Play Guitar In A Five Guitar Band.” This is one of the most emotionally driven songs on the album as its a reflection of a lost love and the emotions that appear when one is suddenly faced with that person again, if even in passing. I've been in such a situation, as I imagine many have, and it always seems to cause a great amount of self reflection. What's great about the lyrics of the song is that they are relatively simple, but really capture that feeling, while remaining specific enough that it feels like a single person's experience, not some all encompassing emotional dump. It feels real. On a more musical note, the guitar work in the chorus is brilliant, moving at such a fast paced, with such great precision that it actually reminds me of some of the guitar work in the 1980's King Crimson. It's a great way to bring the album to a climactic finish before it leads into the short, instrumental closer “Booyah Achieved” which just feels like a brief epilogue, carrying some of the same musical ideas from the last song. It's a nice little touch.

Other great songs on the album are “Monkey!!! Knife!!! Fight!!!" and “Women We Haven't Met Yet” which I felt would be an injustice to not mention. I can see why they starts to drift away from the long silly song titles though because some of these songs I can't recall which one is which simply because they have nothing to do with the song. They're all so funny and memorable that they no longer feel as memorable when they're together. Strange how that works.

What is great about Highly Refined Pirates is how the songs on here come across as very fun and simple rock songs at first glance, but even now as I critique them years and years after first hearing them, I'm finding more to enjoy about them. Minus The Bear's song writing is actually quite bold, avoiding clichés and formulas, but never coming across as pretentious. It never feels like they discard what feels natural for the song for the sake of being innovative and good on them for that. I think that Highly Refined Pirates was one of the best releases in 2002 and a debut album well worth remembering. Minus The Bear have evolved quite a bit since then and have had some highs and lows musically, but even their lows aren't really that low. I've enjoyed all of their albums to some extent or another, but this one remains my favourite of theirs. As far as having songs that I connect to and have impact on me, these are the best of the bunch. You should give it a listen if you haven't already and check out their latest album Infinity Overhead to see where they've gone to in ten years.