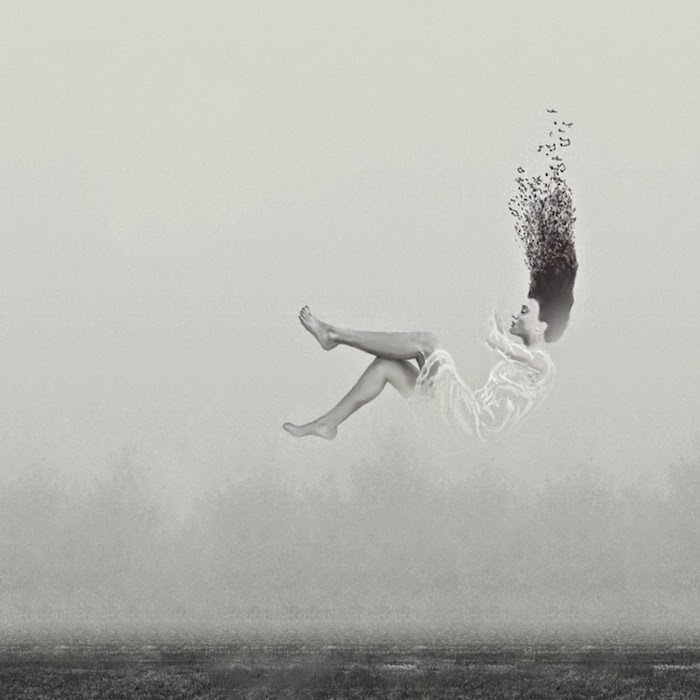 For quite a few years, indie electronic musician Danny Peck, who goes by Dep, has been releasing music at a steady pace and has really become quite a prolific artist in that time. And with every album he seems to do something a little different, careful not to repeat himself, but able to maintain a certain sound and style. I reviewed his self titled album a couple of years ago and admittedly a few of the releases that followed didn't appeal to me nearly as much. It wasn't bad music, but I just felt that Dep was taking his music in a direction that didn't gel as well with me which happens sometimes when a creative individual releases enough material; it's not all going to hit home. But I kept listening to see what he had up his sleeve and lately I feel that he's been hitting new highs with the strong Rivers & Ghosts and now his new full album Ever Looming.

It feels like his most ambitious work yet, exploring different colours in his electronic pallet. He simulates more traditional instrumentation, but with a beautiful accuracy. Not only that, but he brought on a real violinist to play on a number of the songs. At times he seems to channel Sigur Ros, save the intense falsetto singing, often relying on the sound of metallophones or piano next to a synthesized backdrop. It doesn't come across as a huge departure as Dep as an artist, but rather a sure footed progression into bolder territory. The songs feel more grandiose and in the end, a little more complete. It's as if they accomplish all that they can, which is a satisfying feeling.

There is a little bit of a formula to the song writing, which is okay because it's a good formula and the melodies are unique enough that it does get overly repetitive. The songs start off quiet, usually with a fairly simple synth soundscape, and it slowly builds into a very grandiose, multi-layered, thunderous conclusion. This varies from piece to piece, but does seem to be a strong pattern in the songs. But like I said, it's a strong formula that evokes an emotional reaction from the listener. I know I'm a sucker for it. That sort or dramatic structure makes it ripe for movie soundtracks, something in which Dep has dabbled in before previously with his score for Flight of the Mind, which was his release just before this one. I've actually known the cinematic quality of Dep's music for a few years as I put some of his songs as a soundtrack to short film I made in 2010, but for various reasons that film never did see the light of day. That's a story for another time perhaps.

Some of Dep's finest compositions are on here, but the one that really stands out to me is “Last Known Surroundings” which features guest vocalist Stephanie Morgan, who is superb and she really boosts the quality of the song. Not to say that it would be weak without her, in fact, it would still be an amazing piece of music, but the vocals were a strong choice to elevate it further. “Burnout Awakening” is another great track, followed directly by “Still The One Direction.” These two tracks offer something different than most of the songs on the album, going for something more percussion driven and aggressive. The variation is welcome and rewarding. But I also can't forget to mention the opening track “Stretched for Home,” which is the perfect mood setter and gives the listener the perfect sample of what sort of music Dep was setting out to make in this album.

It's not obviously catchy or instantly memorable, but “Ever Looming” is an album that sets a mood and permeates in the listener's psyche. It isn't intended to be catchy. It's intention is to evoke emotions and stimulate your senses giving a musical experience that is longer lasting and ultimately more compelling. It invites repeat listenings and rewards those open to connecting to it. While promoting this album, Dep seemed very proud and confident in his work here and indeed he should be. I suspect that “Ever Looming” will continue to be regarded as one of his finest.