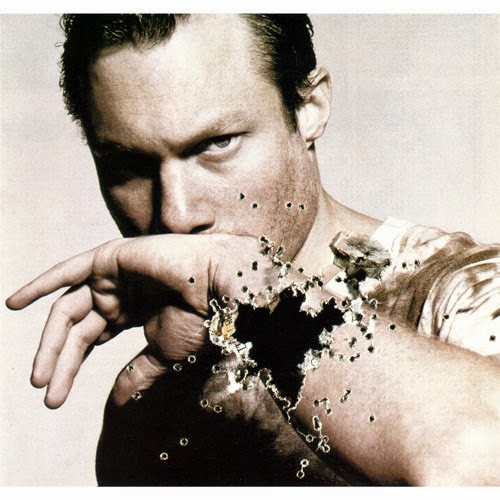 I remember when I first heard Rob Dougan's music, it was a song in The Matrix where Morpheus takes Neo into the program to teach him about agents and there is a sexy woman in a red dress. I wanted to find out what the song was and at the time I wasn't nearly as web savvy as I am now so I wound up not figuring it out. I was clearly not very resourceful because it wasn't top secret information by any stretch of the imagination, I just didn't know how to research things. But that song reappeared a few times in my travels, at one point someone mislead me into thinking it was a song by Moby. It wasn't until 2003 when The Matrix: Reloaded came out and my younger brother picked up the soundtrack. There were two songs by Rob Dougan on there, one was “Furious Angels” and the other was a track called “Chateau” from the scene where Neo takes on a whole group of program minions with every medieval weapon imaginable. That inspired me to check out more of Rob Dougan's work and I found his website which was promoting his full album Furious Angels, which contained the title track, but sadly not “Chateau” as that one was made specifically for the film. But also, it had a song called “Clubbed to Death” which was the song from the first Matrix film that I had been looking for years earlier. I listened to the album and instantly knew that I would love it so I picked up a copy and years later, it is still as beautiful, dark, and poignant as ever.

Furious Angels is a tale of a destructive relationship, a bleak look at love and the sadness that surrounds romance gone wrong. It's a sad story told in a very elegant way. The backdrop to his sad lyrics are not trite pop-punk songs, but rather the fascinating blend of thick electronic beats and rich cinematic orchestral compositions. It is at times a bit melodramatic, but I'll be damned if it isn't beautiful to listen to.

It starts with an angelic prelude which leads into the eerie strings of “Furious Angels”, a different version than the one on the Matrix: Reloaded soundtrack. This one has lyrics and is a fair bit longer. While the instrumental version was dramatic and powerful, the album version adds a whole new layer to the song giving it more emotional tension and resonance. It is followed by “Will You Follow Me?” which sounds like it was made for a movie score, but has no attached credit that I'm aware of. It is pure orchestral music, losing the electronic aspect of his music entirely. It is a beautiful piece though.

Other album highlights include “I'm Not Driving Anymore,” a desperate, tortured song that builds in intensity with penetrating percussion and strings. It's amazing. It's followed by the near-perfect “Clubbed To Death,” one of the most dramatic cruising songs you'll ever hear. Through the years the song has been a fair bit overused in various trailers and commercials, but it still does it for me regardless. It's smart to go through many movements, with beautiful piano moments between the dark dramatic synthesized portions and thick beats. If you haven't heard this song, and you probably have, you should definitely listen to it. It is an electronic masterpiece.

Every track is quite good, but the end stretch of the album is where it really picks up. “Speed Me Towards Death” is dark and dramatic song with eerie lyrics of a suicidal nature. The approach is strange though; it's not super sorrowful so much as it's takes a matter-of-fact approach, more along the lines of 'life sucks and isn't going to get better so why bother?” rather than lamenting about specific heartbreaks. Next is “Drinking Song” which is a very special track to me. It's a very different sounding song from most of the material on here, playing more like a jazzy piano song rather than an orchestral arrangement. And then Rob Dougan's singing voice makes a lot of sense in this context. He has a voice for jazz, but doesn't often use it for that. The lyrics of the “Drinking Song” are among my favourite words ever penned for music; they are unspeakably sad and beautiful. A dramatic pause later and it brings the album into it's finale, “One and the Same,” which gives a much needed change of mood from the majority of the album. Despite all of the heartbreak and sadness of the album, this track leaves it on a pleasantly optimistic note. I can't help but feel that this is crucial to the success of the album, that without it, it would be too heavy and without a journey or emotional arc. This rounds it all out to a perfect package.

But that isn't the real last track as there is a bonus song, “Clubbed to Death 2.” Although it doesn't obviously resemble the first “Clubbed To Death” in melody, it does have quite a few similarities structurally and in atmosphere. And it is worthy of the name because it is a great, percussion driven instrumental track with the dramatic driving force behind it that made the first one the success it is.

When I hear complaints about Furious Angels, the thing that most dispute is the vocals in which Rob Dougan provides himself. Indeed, his singing can be a little jarring at first, especially as his deep, gravely voice is pinned up with melodic string arrangements, but I find that his passion speaks for itself and I've come to really enjoy what he contributes to the songs. If you really are unable to get into it, there are many versions of the album which come with a companion disc of instrumental versions of the songs, so fear not. And the music is well worth listening to on its own no matter your preference.

Rob Dougan has also been a fairly mysterious entity in the music industry the last decade, but I actually still hold onto hope that Dougan will release his much anticipated follow-up to Furious Angels which he announced years ago. One of the reasons is that Furious Angels took six years to make and was financed by Dougan himself rather than a studio. He did this with the money he made off the tracks he did release and licence to commercials and films, likely “Clubbed To Death” for the most part. As such, it would only make sense that he would take another very long time for the follow-up. Also, he hasn't completely disappeared. He has a very active Twitter account and has still done a few odd jobs in the music industry. He even has a finished song in a short film which is actually just an over bloated jewellery commercial called “The Letter” starring Thandie Newton. You can watch it on Youtube, but it's not amazing. It's worth hearing the song, which isn't outright named, but it's very good and it's great to hear Dougan's work again.

And actually, I don't mind that he hasn't released his second album yet. I'm still not bored with Furious Angels and while I would like more, I have to admit that the kind of music that he makes takes a lot of work and can't be rushed. Besides, when you make an album that is as brilliant as Furious Angels, you should take a much deserved break.