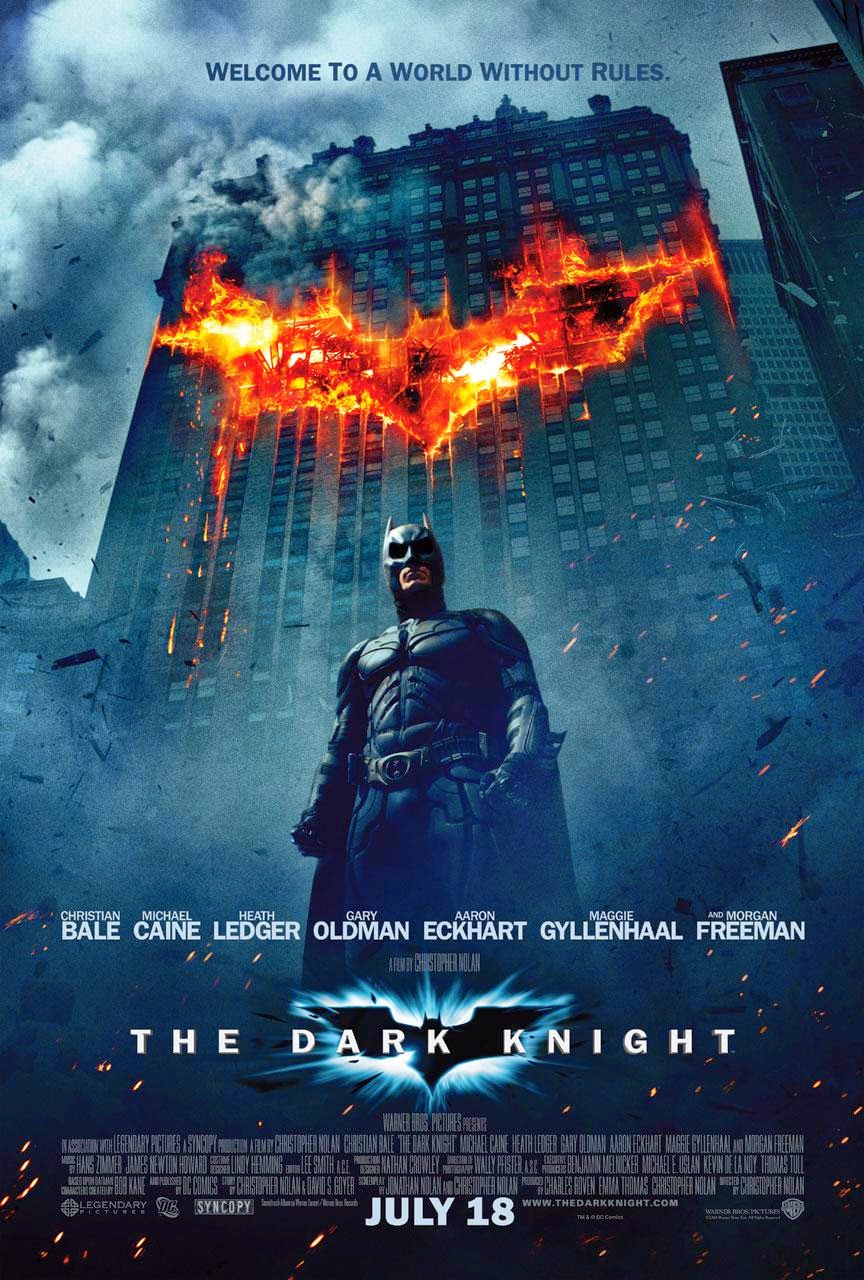 With Batman Begins having raised the bar so high for Batman films, and comic book films in general, the next film would be a crucial one. The last movie ended with a bit of a teaser, with a Joker card handed to Batman. This promised a lot as The Joker is a long time favourite villain for a lot of fans. I'm one of them. The Joker in the 1990's animated series, as voiced by Mark Hamill, is one of my favourite characters from any sort of Batman show. He is just the right mix of hilarious and evil, which is a fun combination. I remember that when it was announced that Heath Ledger would be cast to play The Joker there was some instant backlash, which I always felt was unfairly placed. You see, I knew that Ledger was a great actor and I knew that he wouldn't have been given this coveted role without having done something to earn it. And as images of the character and a voice in the teaser trailer came out, backlash became excitement as people were suddenly enticed by Ledger's mostly unseen portrayal of the iconic mad man. It was clear we were getting a much more gritty incarnation of the character than any before, as true to this new vision of Batman.

With the Batman on watch, the crime lords are hiding scared. The Gotham police are unofficially working with Batman (Christian Bale) and there is a hot new district attorney in town named Harvey Dent (Aaron Eckhart) who is publicly fronting the war on crime. However, The Joker (Heath Ledger) is on the loose and he's been stealing from mob banks to gather some attention. He approaches the crime lords and presents them with a solution to their woes; he proposes to kill the Batman for half their money. They decline at first because they think he's insane, but after many of them are put behind bars after Batman, Jim Gordon (Gary Oldman), and Dent capture an informant who had been keeping the mob's money, the mob resort to bringing in The Joker, who publicly promises to kill people until Batman reveals his true identity.

Where Batman Begins' theme was fear, The Dark Knight focuses on chaos and the corruption of order. Gotham City is no longer a place controlled by fear as it used to be and as such, The Joker's mission is to corrupt it. There are two scenes in particular where he tries to bring the people of Gotham to do evil things; one is where he does the 'social experiment' on the two ferries and the other is where he threatens to blow up a hospital unless someone kills Reese, a man who knows the identity of Batman. The Joker just wants to see good people do bad things. He agrees to work with the mob, but really his intentions are his own and he has no sense of loyalty to anyone. He doesn't even really feel loyalty to himself as there are two crucial scenes where he is willing to give his life for this objective. The first key scene is when Batman is driving the Bat-Pod after flipping the truck that The Joker was driving. He stands there literally wanting Batman to do the unthinkable and murder him in either rage or desperation. There is a parallel scene where The Joker visits Dent in the hospital and gives Dent the opportunity to blow a hole in his head with a gun. That is the deciding moment of Harvey and whether or not he would get corrupted into a villain and the public face of order gets thrown into chaos.

The Dark Knight is a very different kind of movie than Batman Begins. Their atmosphere is very different and even borrow from a different colour pallet. The last movie was lit with shades of brown, where this one has a very dark blue look to it. This was a good choice to separate the film on a visual level. Their mood is different in that this one no longer has that sense of mystery as we've learned all about Batman and what makes him spin. But that sense of awe over Batman and his abilities and the sense of control that comes with that is challenged by the new villain. It's escalation, just as Jim Gordon predicted at the end of the last movie. And it really seems like this movie is more about The Joker and his plan rather than Batman, after all, he is the one moving the plot forward the whole time.

Because of this, it was necessary for the portrayal of The Joker to be a powerful and psychotic character. And they made the right choice of having him shrouded in mystery. While we get some brief monologues about his past, they directly contradict one another so we know he's lying. Smart choice. I don't know what sort of back story could be given to him that would justify his actions or seem like a plausible motive. Heath Ledger took an iconic character and reinvented him in such a way that would influence any future renditions of The Joker. It is such a curious balance, watching The Joker in this film; he is such an entertaining entity to watch, even though he is pure evil and does horrible things. That's always been the appeal behind The Joker, I think. His humour is an amusing shield over the complex, sinister character. He's a chaotic element in an orderly world. But most of all, under all of the make up and lunacy, we see that he is a genius with an intrinsic understanding of the worst parts of human nature. This is why he is able to manipulate the mob as well as he does.

What is remarkable is how well Christopher Nolan took these iconic comic characters and sculpted a complex crime thriller out of them. While not always true to the origins of the characters, he is at least true to their essence. We understand what makes them tick and what their motives are and sometimes that is lacking in movies. We often get a shallow villain who wants to take over the world or is just plain crazy and we don't often get much more motivation than that. Even Loki in The Avengers doesn't get a real in depth treatment as far as understanding his full motives, but with The Joker, we accept it, even if we don't fully understand it. As for Two-Face, we get to know his motives all too well.

The movie isn't perfect, but as I've said before, I don't believe a perfect movie exists. I don't fully know how The Joker is able to infiltrate as many levels of Gotham as he does or how he's able to predict basically every move that anyone can make. I understand that he's brilliant, but even then it feels like a stretch. That would be my main complaint of the film. I'm not interested in griping about Batman's voice or how over-hyped the movie may or may not have been. I'm not much of a nitpicker.

I'm more interested in the story and characters and how seamlessly it plays out. Fortunately, The Dark Knight is just as deeply considered as Batman Begins was. It plays like something bigger though. It feels like a struggle between an even greater evil than before. Where the villains in the last film were cold and calculated, this feels more personal and impassioned. That is why the film works as well as it does; The Joker hit where it hurts and made it personal. And thanks to Nolan allowing us to feel the emotional resonance of the events, we are along for the ride, for better or for worse.