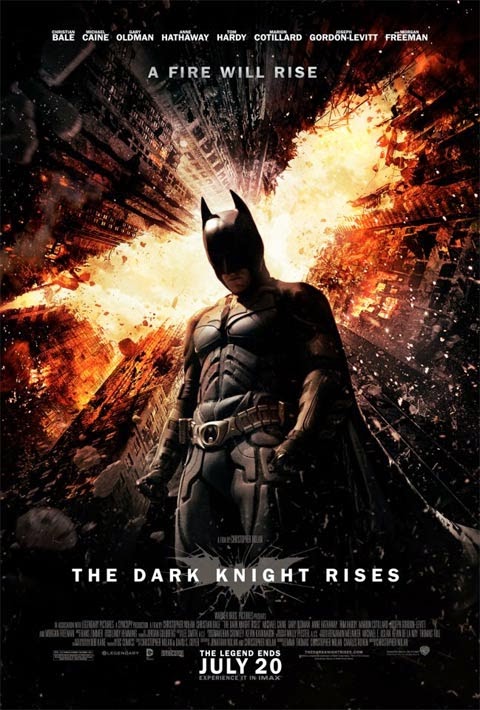 The Dark Knight was a towering success, both financially and critically. After its release it would become the second highest grossing film in the United States until Avatar came in a year and a half later and knocked it down to third. But what this started was something that was bigger than Batman. What happened was that Warner Brothers funded Christopher Nolan's dream project, Inception, which was also a massive hit, albeit not to the degree as The Dark Knight, but that's to be expected. This showed that the mainstream was no longer just a fan of Batman, but also becoming loyal followers of Nolan himself and his creative output. This adds a certain amount of pressure to the project, after all, Inception was almost as well received by fans as his Batman films. The Dark Knight Rises would have to be a movie to top all movies in order to please everyone.

And this doesn't seem very fair to me. One of the early negative reviews I read of the film said “This is the problem when you're an exceptional, visionary film maker. When you give people something extraordinary, they expect it every time. Anything short of that feels like a letdown.” As a film maker, this is frustrating to me. If I release too much good work, I'll get a negative review for releasing something that isn't bad, but just not as good? What I ask from those who haven't seen the film then is please, keep your expectations realistic and don't just hate the movie if you feel like it doesn't fulfil its hype. Hype is something that is made by marketing teams and fanboys, not film makers. Though, Nolan knew that he had to somehow raise the bar for this film, and sometimes it feels like that. It feels like he was trying to make a grand spectacle of a movie and often he succeeds.

Since the death of Harvey Dent, Gotham has transformed from a city ruled by the mob to a place where there is no more organized crime on the streets. Batman has disappeared after the night Dent died and Bruce Wayne (Christian Bale) coincidentally has become a recluse, mourning the loss of his friend and love Rachel. But something is stirring in Gotham's underbelly, as a masked man named Bane (Tom Hardy) is rumoured to have a small army under the city. When Jim Gordon (Gary Oldman) accidentally discovers the group, he escapes with his life, but is hospitalized. Bruce Wayne's mother's necklace gets stolen by a cat burglar named Selina Kyle (Anne Hathaway) who is hired to retrieve Bruce Wayne's finger prints in a plot to forge his consent in the stock exchange. When Bane and his goons take the stock market hostage, Batman returns and tries to find the connection between Bane, Selina Kyle, and whatever secrets are developing under the streets of Gotham.

I have to admire what The Dark Knight Rises achieves in that it consistently feels like it's going to break under its own weight. Fortunately, it does not, but that sense of grandeur sure adds a lot of tension to the film. This film doesn't play like a crime thriller or mystery like the last two Batman films, but almost feels like a war movie if placed in a metropolis setting. It always feels like something big is going to happen. As I mentioned in my Dark Knight review, Nolan used brown and then dark blue in the previous two films. In this one there is a lot more black, which immerses the audience into the visual bleakness of the situations. Sometimes even the more subtle tools add more weight to a film.

While trying to find the central theme of the movie, I was informed that it was pain. The conclusion I came to was different though. I thought the film's theme was false hope. Bane's plan to destroy Gotham involves tearing down the systems in place and giving the people of Gotham a sense of liberation, despite the fact that they're trapped in the city. He gives them a false sense of hope, though plans to blow up the city anyway. And after Batman is defeated by Bain he is imprisoned and given a glimpse of the outside world through a tunnel leading to freedom, though he cannot get out through it. Again, he is given as false hope that he could escape. But also, all throughout the movie there is a lot of emphasis on the events at the end of The Dark Knight, where Two-Face dies. They built the Harvey Dent act to keep the mob in prison. But of course, the fact that Dent was corrupted and became Two-Face means that Gotham's source of hope was in fact a lie. I like that aspect of the movie actually. What was seen as the right decision in the last movie has turned into something sour because it's a lie. The movie doesn't force an answer because the moral answer isn't clear. Would you hold onto a lie if it meant having safer streets? I'm glad that the film asks the question. It also calls into question the very justice system, implying that perhaps it is also a false hope in that we rely on it for safety, but the system can be easily manipulated. Of course, it shows that when Bane strips the city of these systems, things are clearly not more just.

But if the theme of the movie is pain, I can see that working too. In a sense, false hope is one of the ways that Bane inflicts pain onto Gotham and Batman. The two don't contradict each other. The characters add a much more literal interpretation to that theme. Bruce Wayne starts the movie on a cane, suffering from the injury of his fall eight years earlier. Their take on Bane is almost the personification of pain, not only one who gladly inflicts it, but also one who is in a constant state of agony.

Unlike in the comics, Bane is not fuelled by the “Venom” that makes him super strong. His strength is natural, but that doesn't remove his menacing appeal. The mask serves a very different purpose in that at some point Bane was beaten nearly to death and the mask provides an anaesthetic that alleviates much of his pain. Again, a very literal usage of the film's theme. Tom Hardy made for a very compelling villain, though not as much as Scarecrow or The Joker, in my opinion. Though his voice is a little jarring at first, I soon adapted to the approach they took to it. What Bane does have over the previous villains is that he comes across as more menacing. None of the past bad guys could take on Batman in close combat, so when he confronts Bane and loses in one of the film's best scenes, it makes the future of Gotham seem that much more bleak.

The film is not without weaknesses though. Out of the three movies, this one definitely requires a little more suspension of disbelief. There are some unsatisfying aspects of the finale, though some of the spectacle is certainly something to behold. I guess there are just a few leaps of logic when it comes to some of the scenes. It's hard to get into without spoiling anything, but let's just say that Gotham is in a chaotic state for a bit too long for it to make any sense. I just can't buy that the whole outside world wouldn't have thought of a plan to find and disarm Bane... it's a bit of a stretch.

Truthfully, this film doesn't hold up as well as its predecessors. The story just doesn't stand up to scrutiny. Though I do know that the film was on my mind for days after watching it, so that's positive. Like many of Nolan's films, it takes time to digest and rewards those who take the time to consider the film. If you keep your focus on the characters and their inner conflicts, some of the plot difficulties may seem less relevant. I will say that this is my least favourite of the three Batman films, though that isn't an insult so much as just an order of preference. There are others who have many valid reasons for citing this as their top choice. It's still a great way to finish off one of cinema's finest trilogies.