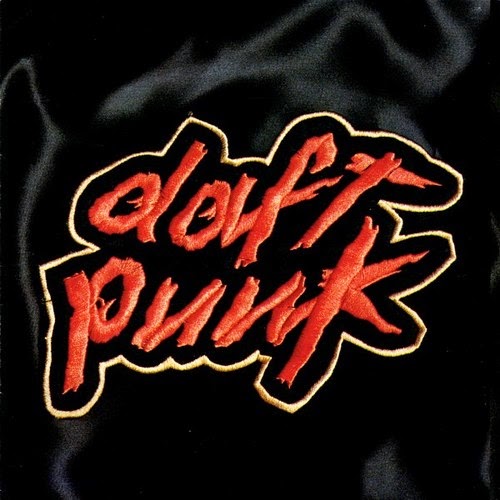 Despite not actually having that many albums to their name, Daft Punk have had a significant impact on electronic music and the music industry in general. And what is interesting is that their albums have been well remembered with a long lasting legacy. But I almost see their discography as something to be remembered rather than the albums on their own, strangely enough. So, I'm going to take the opportunity to have a look at each of their albums and see how they stand up individually and explore the landmarks each of them were for the time, or at least what makes them interesting.

Their first album was called Homework and was released in 1997. This was before they even started the whole robot persona that they've become so famous for these days, though they still kept their identities fairly low-key, often hiding their faces during interviews. The two members of Daft Punk, Guy-Manuel de Homem-Christo and Thomas Bangalter, actually had met in 1987 and had been more or less working together since then. They even released an album as a group called Darlin' which was them and another member and wound up being a short lived project. Dabbling mostly in rock music, they found that as a rock band they were nothing more than average, but when they started playing with synthesizers and samples, they found a sound that worked much better for them.

Homework is a bit of a strange album, covering a lot of ground, but the result makes an inconsistent vision. If their intention was to make beat heavy, memorable dance tracks, they mostly succeeded. Of course, their most memorable tunes are the hit singles. “Da Funk” is a great instrumental track, fuelled by a strong beat and thick electronic hook. It's still one of Daft Punk's best known songs and is a 90's club staple. And of course, there is the equally as well known “Around The World” which is quite repetitive, but fascinating in the way it layers simple ideas on top of one another, essentially introducing the world to the sort of music Daft Punk makes; simple, but compelling ideas on repeat.

But in my opinion, these aren't even Homework's finest moments. There are several tracks I can always come back to. “Phoenix” works best with headphones, with some elements in the bass line hardly noticeable if you don't have sound that allows the more subtle sounds through. Those subtleties really make the song and elevate it to being quite strong. Even better is the following track “Fresh” which is a brilliant distorted loop, with what sounds like a squealing guitar. It's marvellous song that is easily one of my favourite tracks the band has produced. And just as good as that one is “High Fidelity,” which starts off with some unusual vocal samples, but doesn't take long before it starts to become something really special. They build it up slowly and reward your patience with an amazing beats to dance to. I highly recommend it.Those are the top of my picks from the album, but there are other great songs in it such as “Alive” and “Revolution 909.”

Unfortunately, Homework stumbles in a few places, but in a really bad way. The first fumble is “Rollin' and Scratchin'” which is quite repetitive, but not in a good way. Usually Daft Punk find a loop that is really appealing and deserves to be heard over and over again, but I find very little to like in this song. There are no interesting chords or sounds, just the same distorted beeping sounds, which are eventually replaced with even more obnoxious grinding sounds. It just gets more irritating the longer it goes and the song is over seven minutes long. There is no mercy. A couple of good tracks later and we're given “Rock 'n Roll” which is another overly long track with an irritating scratching sound looped over and over. It also doesn't really go anywhere interesting. It's barely listenable. That's really the worst of it, but those two tracks equal about 15 minutes worth or music so it's pretty hard to ignore. Another weak track is “Burnin'” which isn't as bad and has a few redeeming qualities, like a funky bass line, but that only makes it passable.

The real shame is that if you took out these weak tracks, you would still have a good sized album and it would be much stronger as a result. Homework clocks in at over 87 minutes, filling in the compact disc real well. If you took out the weaker tracks, it would be fine. In fact, if you did that you could also toss in the “Da Funk” b-side “Musique,” which is a pretty great track, and it would be a really solid album. That being said, the good outweighs the bad and it's understandable why the album made the splash it did, especially in the club scene.

But what made Daft Punk into one of the most influential electronic bands would be their follow-up Discovery, which was a bold reinvention of their sound and would be hailed as a true electronic masterpiece by many. Not to mention the brilliant marketing idea to reinvent their personas to be robot characters. Electronic music had its haters because a lot of techno hadn't found its footing really, so not only did they make the music better than most of their peers, but they were robots and robots are cool. Homework serves as a fascinating starting point, seemingly unambitious and completely unaware of the band's future and potential. And for those very reasons, it is still quite charming.

Note: I haven't been able to recover my reviews of Discovery or the Tron: Legacy Soundtrack at this time, but hope to in the future.
Posted by Unknown at 23:46