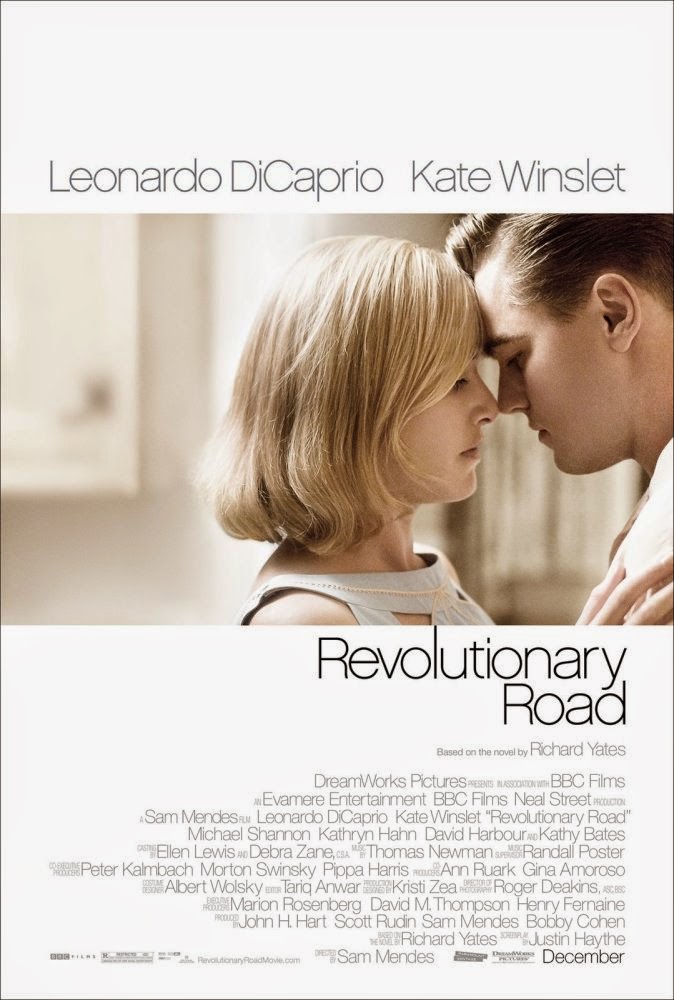 Sam Mendes, director of American Beauty, seems to have a fascination with discontented suburbia. This time he adapts the book Revolutionary Road, a story about a husband and wife with grand ambitions that fall apart from settling down into the average life. It reunites Kate Winslet and Leonardo DiCaprio in a very unromantic reunion after becoming very successful actors post-Titanic. Perhaps the reason they survived it because of their bold choices as actors, such as this one, to strip down the tragic lost love image that their last movie together provided, instead replacing it with a deteriorating passion. DiCaprio had to shed away his pretty boy image in order to make his career a much more solid one, and now he is far less glamourous. The two of them really are a couple of the finest actors of their generation and they shed their celebrity and become a relatively normal couple.

Frank and April, (DiCaprio and Winslet respectively) meet one day at a party and fall completely for one another, but we flash forward to many years later where they are married and have two children and live in suburbia on Revolutionary Road, where they are one of the most well liked couples in the whole neighbourhood. After getting a negative reaction from her performance in the town play, emotions rise and the two wind up having a brutal fight that has them emotionally separated for a couple of days. In that time, Frank begins an affair with a woman from work who catches his eye. As he returns home, April greets him with a plan to reinvigorate their marriage; she wants to take the whole family to Paris and live there to start a new life. Frank agrees and their lives are filled with excitement again, though it doesn't take long before complications begin to rise.

Watching Revolutionary Road is a harrowing experience because it rings all too true to home and the lives of many. It diagnoses a severe problem in our society, and puts in the 1950's where it would be even more difficult to address the issue given the social expectations of men and women in that time. April's proposal to go to France includes her taking on a job and supporting the family while Frank finds himself and discovers what he wants to do with his life. Their friends are appalled at the idea, after all, what kind of a man would let his wife take on that responsibility? But we aren't all better today. People still fear chasing their dreams and radically changing their life style. I know I do. And society is still structured in such a way that one finds that they need to work at a job they don't like so they can keep up with their responsibilities, meanwhile their life goals and loves are put on hold. It isn't as obvious as it is in the suburban 50's, but the problem is still very real.

And the real heart breaking part of the movie is that the two of them really do love one another and the viewer can see both points of view, as well as where one and the other is being selfish. In a way, it is like watching one of my own marital arguments take place; you know exactly where you said something wrong or mean and you lose control and it just spirals. But of course, April and Frank do spend a great deal of the movie happy and in love. That is vital to the film's success as we get a glimpse of what their lives could be.

The movie challenges the role of masculinity and what society defines it as. Michael Shannon plays John Givings Jr. who Frank and April meet through a neighbourhood friend. He is mental patient who has been treated with electro-shock therapy, but apart from being brutally honest he doesn't seem to be a danger to himself or anyone else. Arguably he is the most sane person in this film, recognizing the faults of the society and being bold enough to speak against them. Everyone else accepts their fate, which is why he initially connects so much with Frank and April. He encourages their escape from their suburban prison. While everyone in the town looks down on Frank for his willingness to leave his job and move to France, John gives him grief when they are reconsidering and calls him a coward. This touches on the heart of Revolutionary Road. Perhaps society's notion of what is masculine is not what is truly masculine and what the male heart calls us out to do. It suggest that perhaps that we are to be bold and take risks, and care for our families emotionally over financially. Perhaps security is not what we are to seek.

Conversely, April is not faultless either. There reaches a point where she becomes cold, shallow and ultimately ungrateful. It is difficult to watch her character lose her passion for life in such a way. When she loses respect for her husband and starts treating him poorly, things start to really fall apart and the two of them no longer work together as a unit; they become opposing forces. Plus, along the way, she becomes quite rigid in how she wants to find happiness and becomes unwilling to compromise. It's not a movie to take sides on though. Neither party is right and neither is wrong; they are both just controlled by fear.

I can't say I enjoyed the movie, but I would highly recommend that people see it, if only just once. I think I will stick with the single viewing because it's a little too heavy to take in again. Revolutionary Road serves as a cautionary tale for couples or anyone else finding themselves bored by the redundancies of life. It asks you what you live for and what you would be willing to give up to be happy... or at least not miserable. It asks how you can challenge society and cultural expectations, and suggests that one must sacrifice what they know for love and fulfilment. Though, what makes this movie truly upsetting is that, when you really think about it, we're really not willing to take those risks ourselves.