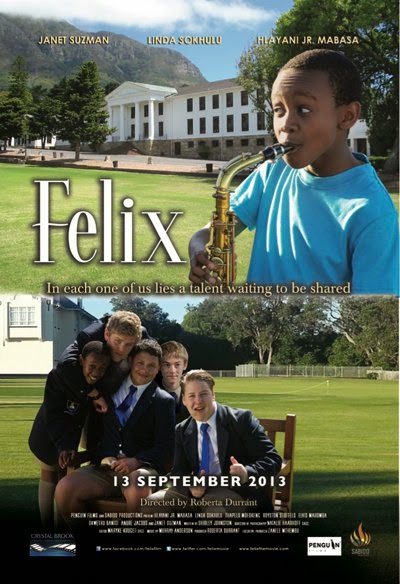 The last show I caught at this year's Vancouver International Film Festival was “Felix” and I only managed to catch it because it was popular enough for its initial screenings that they added a repeat show at the end of the festival. And even then, the show was packed so it seems that this showing managed to generate a fair amount of buzz. One of the interesting aspects of this show was that it was open for all ages. Most festival films are only open to ages 19 or older due to festival membership stipulations, but they made sure this film got its legal rating and let it open for younger viewers. And I can understand why.

Felix follows young Felix (fancy that), who is the popular kid at his school, often called by his peers “King Felix.” 14 year old Felix then gets a scholarship to a private school which is a bit more prestigious than his old school, and with it being primarily white and full of the upper class kids, Felix finds himself treated as an outsider. But Felix finds a way of belonging in the school with the up and coming Jazz concert, as he plays the penny-whistle with great soul and passion. The school, however, has no room for a penny-whistle in the band, but when Felix finds his late father's old Saxophone, he seeks to play that for the concert. Unfortunately, his mother takes issue with Felix learning jazz as she thinks it's music from the devil, and lead his father to drinking himself to death.

What's interesting about Felix, is that while it deals with some heavier issues, like racism, poverty, and alcoholism to mild degrees, the tone of the movie is actually quite lighthearted. In fact, it plays out very differently than a lot of American films these days. There is a fun, childlike innocence to it all that recalls family films from the 1990's, though some of the better ones. It doesn't aim for realism, but instead allows itself to play out almost like a folk tale. You have to suspend your disbelief somewhat. It's hard to imagine that any 14 year old boy, even one with as much natural talent as Felix, could pick up the saxophone so quickly after just a few lessons. It's completely unbelievable. But it works despite that because the tone of the film allows it to. It's a strange thing that they balanced.

Yet, Felix is an age old story about a boy trying to find acceptance and his own path in life. The film goes through the familiar motions of Felix getting picked on at school, but befriending a couple of other quirky misfits. He overcomes his obstacles and you know, it's fairly predictable. But the energy of the movie helps carry it along. You sort of sense that everyone involved loved making the movie and really believed in the project. And you know what, that shines through and makes the film as enjoyable as it is. And why not? It's a timeless sort of story because it's a good formula. Sometimes it's worth seeing again when it's well done again. That being said, there were some parts, particularly in the final act of the film, that were a little bit too cheesy for my liking, but like I said, it's a balancing act. It just feels like it all wraps up too cleanly and quickly for my liking.

It's not new territory story wise, but it's a different setting for me and that's part of what made this such a fun film to watch. For a while I got really immersed in that South African community. You get to know a lot of characters, even minor ones, fairly well and get a sense that everyone knows everything that's going on around town. No wonder Felix couldn't keep his jazz playing a secret from his mother very long. But I also get intrigued by the locations and also the language. Half of Felix is subtitled, but it literally changes from line to line, even switching in mid-sentence from English to... well, to be honest, I don't know what language, but maybe Afrikaans. Whatever the case, it was quite fascinating to watch people casually switch their languages like that.

I recommend Felix if you find the opportunity to check it out. It's a crowd-pleaser of a film, an underdog story that children and young teens can relate to. Felix, the character, has a lot of personality and stands up for himself to pursue what he loves and that's something to be admired. The script is well paced and funny, but it's the charm of the young actor Hlayani Mabasa that sells the show. I'm glad I got to see it.