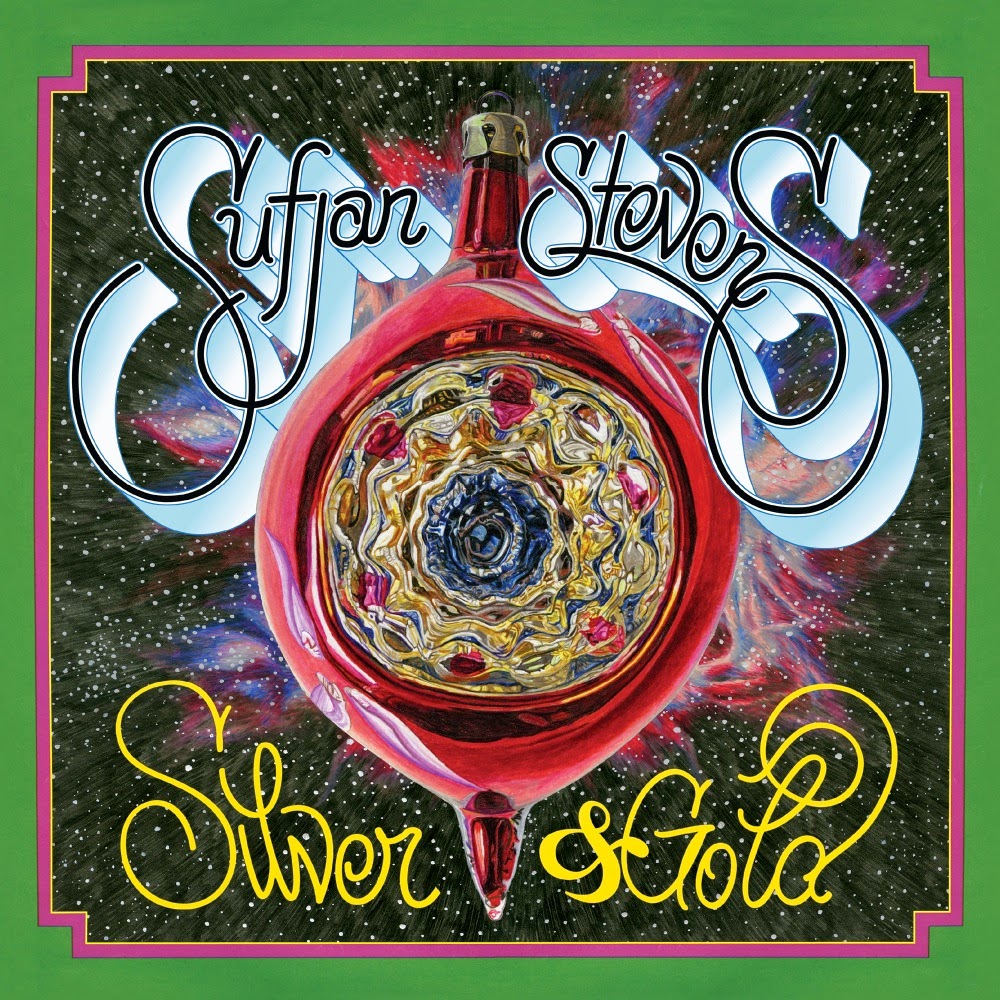 I can't believe it's been six years since Sufjan Stevens released his collection of Christmas EPs called Songs For Christmas. I reviewed it a couple of years ago and found it to be one of the most diverse, encompassing, and even interactive Christmas albums. In a time where buying CDs is not really the norm, it was a package that was well worth picking up. And this year, seemingly out of nowhere, Sufjan announces a follow-up of five more Christmas EPs made over the last six years in a collection called Silver & Gold. Unfortunately, I can't discuss the physical contents of the album too much because I was only able to afford the digital copy this year, but all the music is there and that's the main feature of the album. The fact that there is more than that is really just a bonus to make it worth the investment of the physical purchase.

One thing I noticed right away about this album is that it starts to really reflect a departure from the format of the earlier Songs For Christmas as far as appearance goes. The first disc art is reflective of it, but by the second one, it starts to get a lot more diverse and eccentric in its art style. I can't say I'm too surprised considering the radical departure that Sufjan would take musically between Come on Feel the Illinoise and Age of Adz. One can't expect the same sort of output from one year to the next when an artist grows musically and personally. 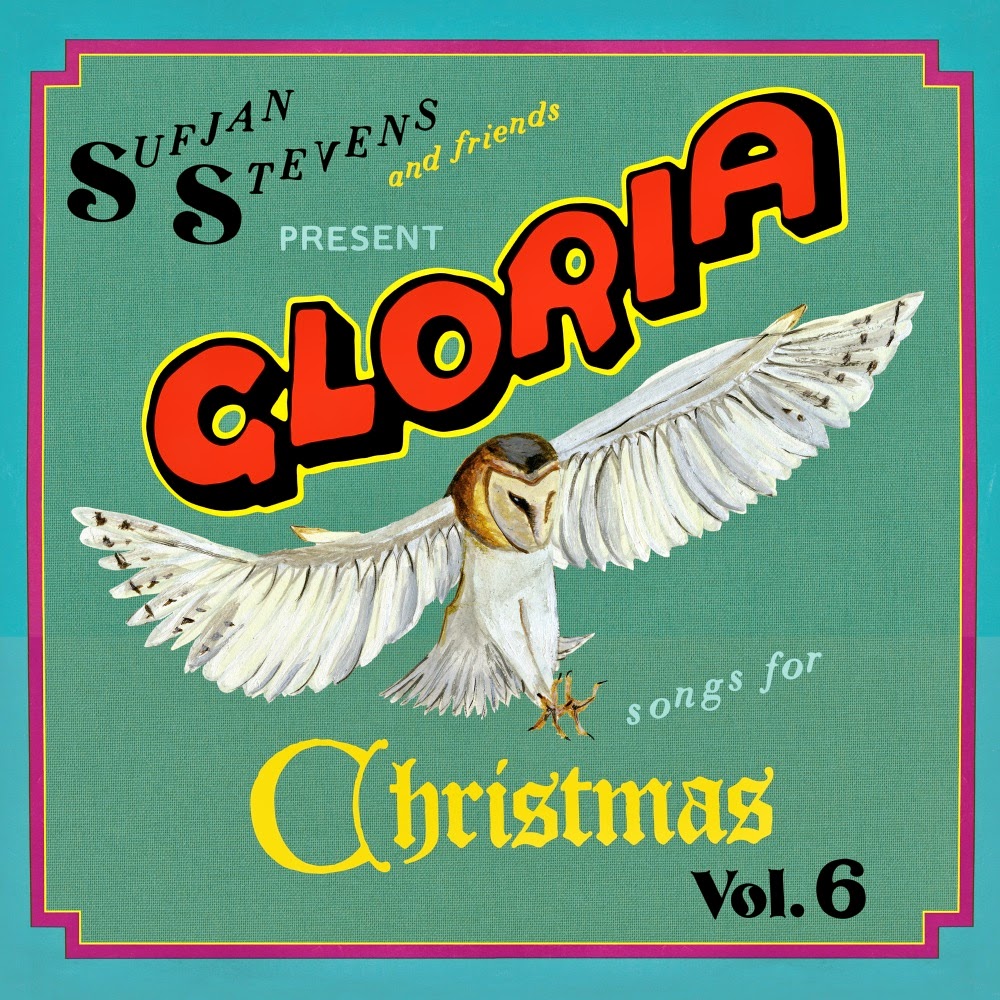 Like many of the previous discs from the last collection, there is a mix of original and classic material. It opens with a rendition of “Silent Night” which doesn't seem too adventurous at first, but it certainly transforms into something strange. Well, basically they play it with a theremin at the end and I don't think that song has ever been played with that instrument before. Apart from that, Stevens doesn't depart too much from what we have come to expect from his Christmas albums. His sound is diverse and playful and Christmas songs translate well into that style. It seems that this one was very much a collaborative effort as Aaron and Bryce Dessner, two founding members of alternative rock band The National, have co-writing credit on four of the songs.

The highlights of this collection is "Lumberjack Christmas / No One Can Save You From Christmases Past" which is goofy, fun, and has a country twist, which is a precarious line to be walking, but somehow they pull it off. Also, there is the beautiful and tender "Carol Of St. Benjamin The Bearded One" which works as well as it does because of the poetic lyrics and Sufjan's singing. The cover songs for the most part are quite unusual choices, as he redoes really old British folk songs instead of the typical Christmas fare.

Disc 2: I Am Santa's Helper 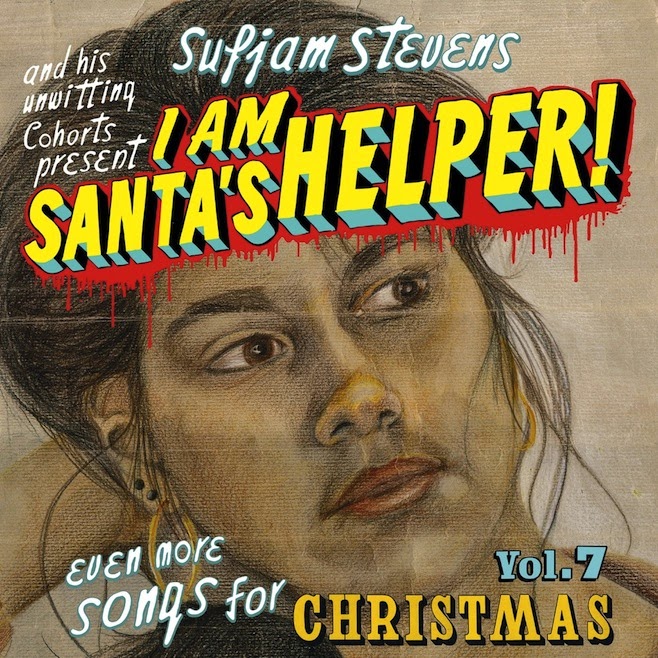 This is a big change of pace in that out of all of the discs, this is the only one that is big enough to be a full LP. It has 23 songs, and while many of them are quite short, it is still over 40 minutes of material. It seems like most of these songs are smaller ideas that were collected together in an attempt to make a bigger better whole. I think it worked for the most part. The smaller and more simple songs make for much more raw material, which is a departure from Stevens' typical well polished and intricate songs. He also continues to cover really old folk songs, like he did in the last disc. Perhaps he felt that he played the other more typical holiday songs to death in the last collection. Sometimes though, I must confess that I wish some of these songs were a little more finished sounding, but I guess this time he went for quantity over quality and I suppose that's okay.

The winner of this collection for sure is “Christmas Woman” the longest song on here by a lot and, as such, the most developed. It is a pleasant mix of synthesized music and classic instrumentation and is overall just a really great song. It's also great hearing short musical solos of original music from Sufjan, such as “Mysteries of the Christmas Mist,” a primarily piano piece that wanders and explores some simple ideas, while sounding grand in delivery. And I don't know what is going on in "Eternal Happiness Or Woe," but it sure is fascinating. 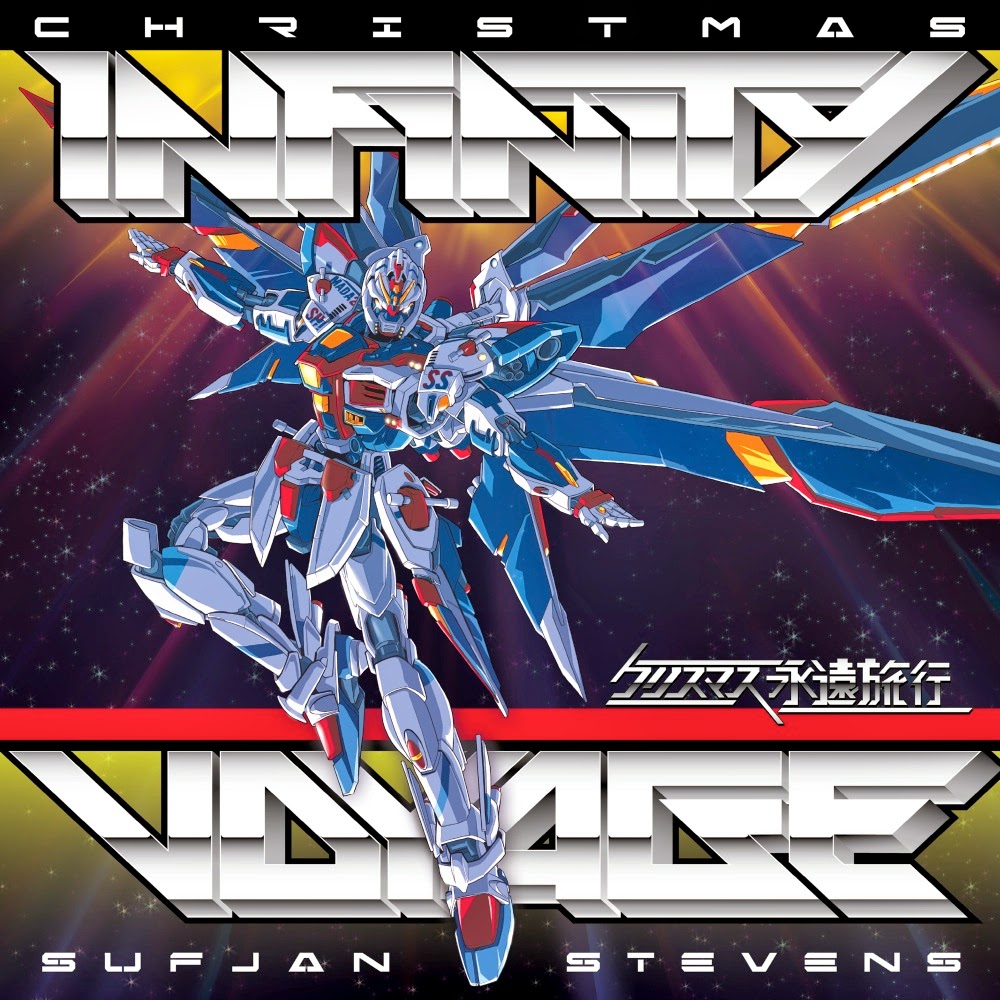 And as the cover art might suggest, Sufjan takes some radical turns in Christmas Infinity Voyage. If you look at what kind of music he was make at the time of this EP's creation, it makes a little bit of sense though. This was likely around the same time as the inception of Age of Adz, his still most recent studio album. And he changed quite a bit musically for that album and that is reflected in the music in here. It doesn't start off too different from most of his previous work as it opens with an expanded adaptation of “Angels We Have Heard On High” which eases us into some of the sounds we'll come to hear throughout. By the next track, we are thrust into a full electronic rendition of “Do You Hear What I Hear” complete with glitchy beats and beeps and blips.

Actually, though this is only 9 tracks long, it has a longer run time than the last disc because it ends in the fifteen minute long “The Child with the Star on His Head.” That song is really hard to wrap your head around because it goes through a lot of different movements and some of them work better than others. It's one of his most experimental songs I've heard, that much can be said for sure, so he gets points for ambition. The most successful track on this one is the smart and deep “Christmas in the Room.” It really hits the mark because it most seamlessly integrates the different sounds of Sufjan's music, blending the heavy synthesizers with the calm guitar plucking. 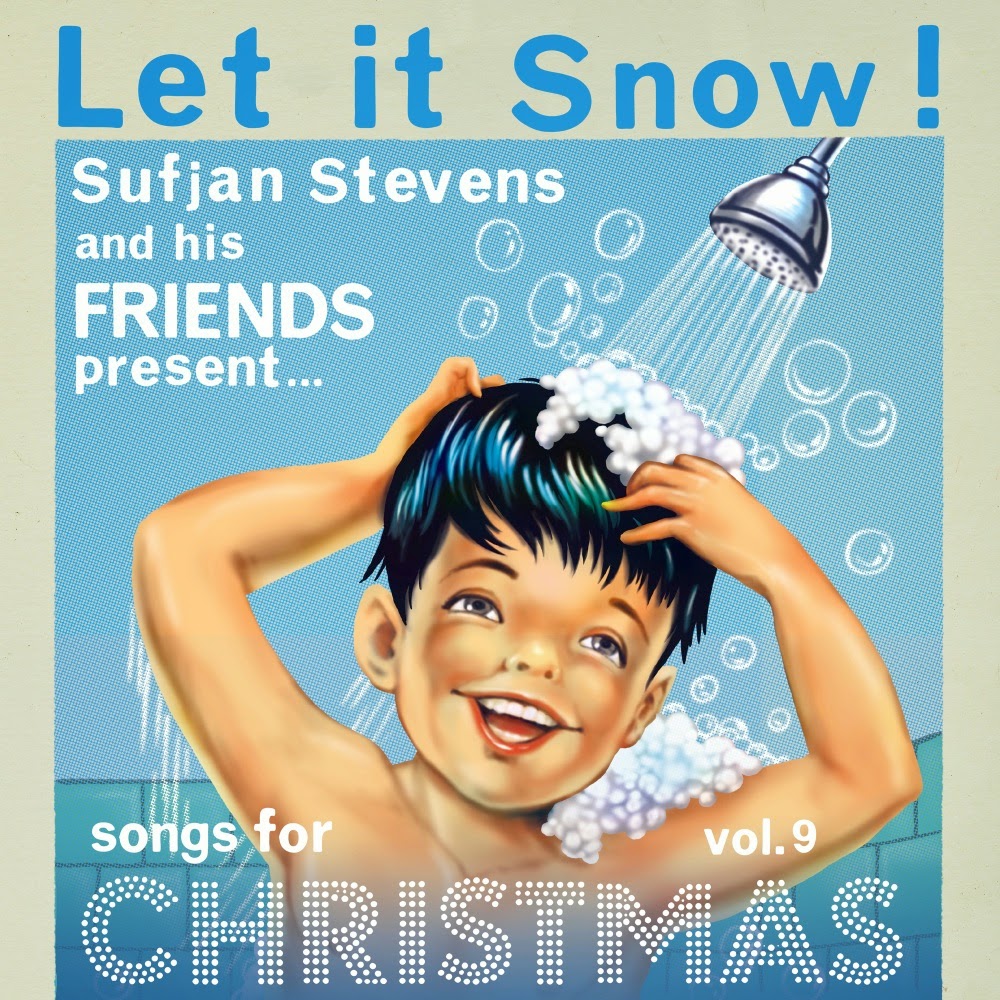 He brings the music a little closer to home with Let It Snow, which I am thankful for. Not to say that I didn't like the music on the last disc, but it sure was hard to take in at first. What makes this one unique is that Sufjan takes a back seat to a couple of the songs to let singer and song writer Cat Martino take the vocals for two tracks, one of which she wrote the music and lyrics for herself. There are a lot more of the popular classic Christmas songs on this one and only one single original song written by Sufjan, but his renditions are quite good and creative, often mixing some of his electronic sounds with the more traditional music that he does. 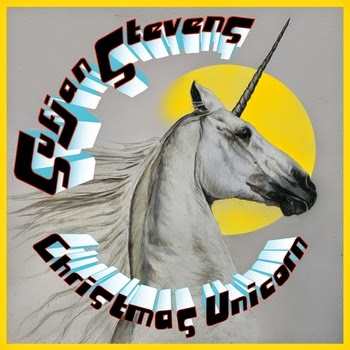 It seems by this point Stevens has figured out the best way to integrate his love for electronic music in with his more traditional style. It takes a back seat for the most part and is used to accentuate moments that might otherwise not have the same impact. It actually sounds really good. It's a little more scaled back and seems to have a bit of a theme to it, which I haven't really caught in any of the other discs, at least not lyrically. In some of the original songs as well as the darker cover songs, it seems to portray a disenchanted vision of Christmas. "Justice Delivers Its Death" is the most dark and deep Christmas song I've ever heard, as it builds on the classic song “Silver and Gold” and takes it in a completely different direction. It's a sobering and sad song and well worth listening to.

The best tracks are “Up On The Housetop” which is a surprisingly dramatic version of the old song about Santa's journey. It's a complete re-imagining of the song and it works way better than I would have imagined. And of course there is the title track, which was the promotional song for when the whole collection was put up for presale. It was the ideal way to finish everything off as it is an epic twelve and a half minutes in length and again, seems to properly mix the best of Sufjan's musical styles. I think the lyrics are clever and often truthful and... I just like the image of a Christmas Unicorn. At first it seems comical, but if you think about what the symbolism is, it's not as funny. Perhaps what the “Christmas Unicorn” is supposed to be is the myths of Christmas in a physical form. Musically the song takes a few interesting turns, including mixing in a portion of Joy Division's classic new wave song “Love Will Tear Us Apart” which I did not see coming. Can't complain though. That song is awesome.

Silver & Gold is a bit of a different experience than the previous Songs For Christmas. While in that one you hear the natural progression of Sufjan Stevens' music, in this one you hear the huge leaps he took from one year to another. Sufjan has really become kind of a strange guy, at least it feels that way through his music. Perhaps he got a little caught up in his eccentricities and has gone a little crazy. Or maybe he was always kind of crazy. I mean, I can't argue with the results though. Crazy and brilliant don't really contradict one another. It can be a little jarring at times, but musically it is still quite pleasing. And I'm glad he's kept up this tradition. It is by far one of the best Christmas music purchases you could make. It's over two and a half hours of music and even the digital copy comes with some art work to admire. It might be a little too much Christmas music to play this back to back with the previous Songs For Christmas collection, but if you space it out, Silver & Gold is definitely worth it.