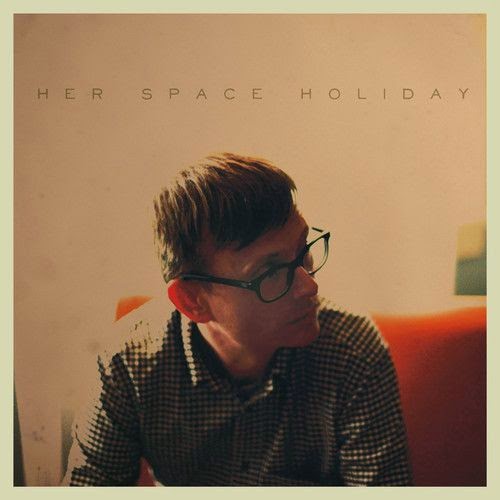 I've been a Her Space Holiday fan since about 2003, first hearing his song “Japanese Gum” off of his Young Machines album. A project helmed by multi-instrumentalist Marc Bianchi, Her Space Holiday has been a successful outlet for his musical ideas since 1996. After getting to know a lot of his discography, he has never ceased to be uncompromisingly honest and as such, it has been an opportunity to hear how he's grown as a songwriter and person. So, one day I found that the project known as Her Space Holiday was coming to a close in August 2011. For whatever reason, Bianchi felt that it was time to lay the name to rest and pursue other musical endeavours. But before he did, he would offer his fans a final release, a self titled album showing the final phase of Her Space Holiday's sound.

I think that, while the album can be appreciated on its own, part of the experience is understanding what lead Her Space Holiday to this point. For years he was releasing albums that were a sort of electronic dream pop, with sampled loops and lyrics of a deeply personal nature. And then in 2008, with his album XOXO Panda and the New Kid Revival, it became apparent that he felt a new musical calling, embracing an upbeat folk sound, more conducive to children's music than the transparent emotional landscape set out before. In fact, it seemed rather joyful. Far stretch from The Young Machines that I was introduced to five years earlier. That made me happy also, actually. It's encouraging to hear people heal from their pain. Perhaps those albums are what helped him though it all. I can only speculate.

Her Space Holiday is an album that continues that folk sound of XOXO Panda, but brings in a more down to Earth direction. It's not as chipper and joyful, but is sincere and restrained without feeling solemn. Not bad qualities at all. The music isn't easy to lump into a genre, but I suppose not much of his stuff is and this album comes across as very mature and refined. It's rich music, full of body and diverse mood and instrumentation. Part of that must comes from how it was created. The music on this album is played by various other musicians from other bands that he has connected with over the years, as such it is his most collaborative album. Conversely, it is also the album that was most on his own shoulders. He started his own record label, funded and released the album entirely himself.

But it is deeply personal and distinctly his own. It sounds like a culmination of his previous sounds as it incorporates tight pop arrangements with an orchestral backdrop at times, and a strange folk twist at others. And often the songs sound like something entirely of their own. Bianchi is a gifted lyricist and while he doesn't always keep the same story telling quality to his lyrics as he did in some of his past albums, he still has a very natural rhythm and conveys a feeling better than most writers.

I am once again impressed with Her Space Holiday's latest release. This album never distinctly says that it is his final record, but something about the way it leaves the listener implies it. Perhaps it's that the album seems to have an overarching feel of optimism and nostalgia. It's almost as if we're left with a heavy heart, but waiting for an old friend to come back. It's something remarkable to capture, but I really feel like he's done it. It isn't my favourite of his albums, simply because I do not connect with the material the same way as I did with albums like 2001's Manic Expressive and The Young Machines, but that's a high bar and I don't fault this album for it. Her Space Holiday is still very moving and gets better with repeat listenings.

It's strange; I've never met Marc Bianchi or even seen him, but I do feel that by listening to Her Space Holiday's discography over the years that I've gotten to know him very well. It feels like I've discovered, journeyed, loved and lost beside him all of these years. What more could an artist want to achieve than that? If you haven't had the opportunity to listen to his work, he put all of his releases onto his bandcamp page so you can hear his progression through the years. I would encourage you to do so. Thanks for the memories and the stories Marc, I wish you the best of luck on your future projects.