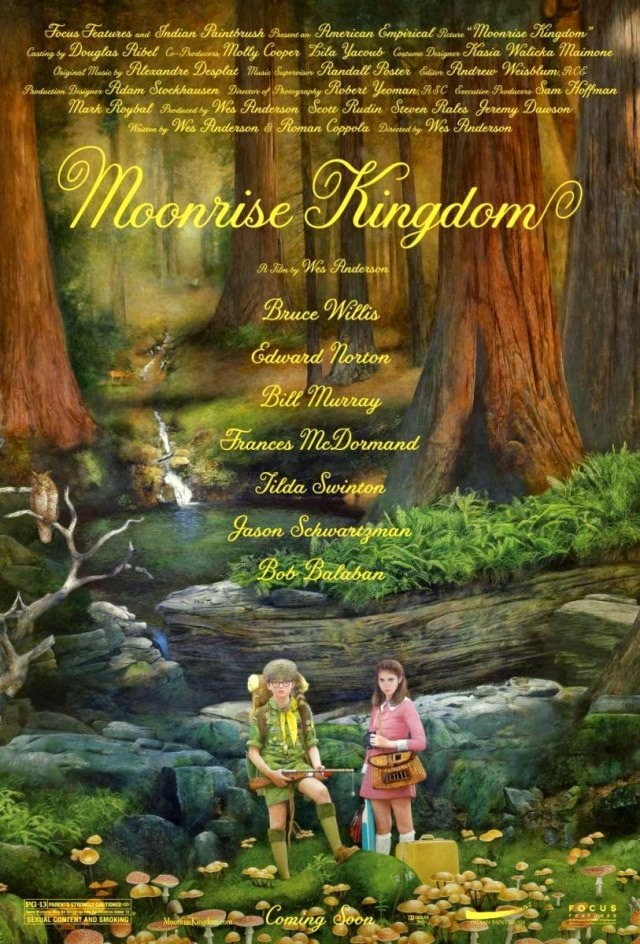 I've been following Wes Anderson for quite a few years now, and while he's not really gotten a great deal of attention in the mainstream, he is a continually respected film maker in the industry. He has a loyal group of fans that keep him making films despite relatively low box office results, and quite a few recognizable actors who frequently collaborate with him. I'd like to think I'm one of these loyal fans as I've seen every one of his movies in the theatres since The Life Aquatic back in 2004. Not everyone likes his style of film making, but I can't deny that Wes Anderson understands what kind of movies that he makes and shows a progression of that style.

Moonrise Kingdom takes place in 1965 and follows young Sam Shakusky (Jared Gilman) as he disappears from his Scout camp to meet with Suzy (Kara Hayward). The two of them live on a small island and attempt to escape into the wilderness to be together. Suzy's parents (Frances McDormand and Bill Murray), Scout Master Randy (Edward Norton), and police Captain Sharp (Bruce Willis) are all on the hunt to find them before a massive storm hits the island.

To appreciate a Wes Anderson movie I think you just need to know that you're not going to see a film with conventional storytelling. Like I mentioned, he has a very distinct style and it takes some getting used to, but his strengths as a director come through in this film. He uses film as an art form, in such a way that it draws attention to itself. His camera movements at times are very obvious, like one of the opening scenes where the camera is positioned at a central point in Suzy's house, and we are introduced to her and her brothers by quick and jarring camera pans as it shows the four sides around the camera. I don't know if I communicated that well, but the point is that it's a very obvious stylistic choice to introduce one of our lead actors. You have to allow yourself to step a little bit out of your typical cinematic head space. His use of colours is very exaggerated so that it looks almost like a real cartoon at times, though the action placed against this expressive pallet is actually underplayed.

The two young leads are not remarkable actors, but their delivery works for the movie. It makes me wonder what they would do with different material. There is a strange maturity to their dialogue and it needs to be delivered in a very dry fashion, which they do. The other, more mature actors, (no offence intended to the younger party) do a very good job and now how to handle the material. It's also very dry. This is a welcome change of pace for a number of the actors. Bruce Willis is very earnest and it's great to see him in a more lighthearted role. There are very few traces of the action star that we all know and love and I like seeing him disappear into a lonely, underworked police officer. But kudos to him for consistently breaking from audience expectations and trying out new roles. That's probably why he's been such a big name for as long as he has. Edward Nortion also takes a lighter turn in his role as the Scout Master. The last while I've mostly just seem him take on dark material so to see him in full Scout costume and talking like he's in a PSA made for elementary school kids. Yet, he's very believable and even at times a very complex character. He's a man put into a situation that's over his head, losing complete control of his Scout troop and their environment.

In fact, that's what this movie is essentially about. It's about situations that are bigger than the people are ready for. The small town people are thrust into situations that are beyond their control. The Scout troop is being ran like it's a military camp, but in reality, they are just kids and volunteer leaders. The official persona that they carry is an amusing façade. I don't imagine Captain Sharp felt prepared to go on a hunt for kids and become a full time babysitter.

Ironically, the kids were the most prepared for the events that would unfold. Sam is a fully equipped and well learned Scout and knows how to take care of himself in the wilderness. Suzy has brought many books and her brother's portable record player for entertainment. Yet still, they thrust themselves into situations beyond their control simply by being so eager to grow up and be adults. They want to have a mature love and live together away from society, after all, their lives have been nothing but tale after tale of alienation. This is why they connected and fell in love. Strangely enough, their relationship is more mature than many adult relationships, particularly those I typically see in cinema. Their love comes from a mutual respect for one another and a desire to comfort the other. It isn't based in anything sexual... mostly. They've thrust themselves into a situation that they aren't ready for. One has to admire the realistic approach Anderson took when putting together the love scenes between the two kids (and no, I don't mean sex scenes). There is this raw honesty about their romance that I think it difficult to approach, given their age.

It's this blend of realism and surrealism that makes the film work as well as it does. It doesn't go over the top in either direction. It's an accessible art film, not alienating to an unfamiliar audience, but also feels no obligation to meet expectations. It tells a simple enough story, but challenges the viewer nevertheless. Perhaps what makes Wes Anderson's films so appealing is that they're hilarious, but taken completely seriously by their characters. The story means something to them and as such, it means something to us. But we get lost in their colourful and quirky world, which is a unique entity of its own. It's not really our reality, but one worth loving just the same.