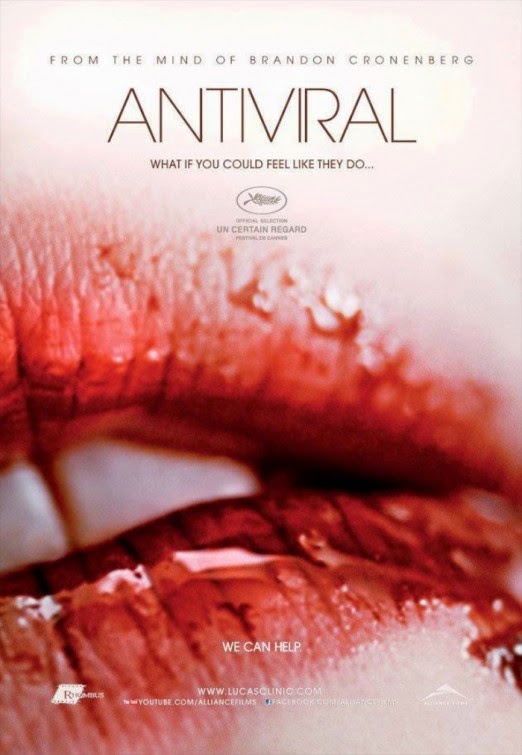 At the Vancouver International Film Festival, the film Antiviral caught my attention and I wanted to watch it, only to discover that I wasn't able to because it only played on two back to back days where I was out of town. Disappointed, I gave up and hoped that I would see it in the future eventually because I like to support Canadian cinema. Well, my chance came sooner than I expected because only about a week later, Antiviral has limited distribution across Canada and I got to see it. That is one of the stipulations if you get your film funded by Telefilm Canada, you get theatrical release in Canada, which doesn't usually amount to much because Canadians rarely even know when Canadian films come out. I didn't know Antiviral was being released, I just happened to stumble upon it when looking for something to watch. I don't think that our industry tries very hard to market our films, which is a shame because we'll never be able to compete with our American neighbours without a little more home support.

But Antiviral, to me anyway, seems like a big event in Canadian film history if just for one reason: it is the first feature film to be written and directed by Brandon Cronenberg. If that name means nothing to you, let's just say that he is the son of David Cronenberg who is one of the most successful Canadian film directors and has breached he Hollywood mainstream a number of times with films like the 1986 version of The Fly, A History of Violence, and Eastern Promises as well as countless other films that have either been hits or have become cult classics. He was, and still is, extremely important to the Canadian film industry. The notion that there will be a heir to his throne is exciting. Even if Brandon is not like his father stylistically, that is fine. After all, Jason Reitman makes very different movies than Ivan Reitman. Though, that doesn't seem to be the case as much here because Antiviral very much feels like a Cronemberg movie. It is dark, morbid and not too subtle in social commentary.

It is the near future where celebrity stardom has become a huge driving force in business and culture. People's infatuation with them has gotten so out of control that there are facilities which collect viruses that have been taken from celebrities and distribute them to the public as a means of bringing them closer to their favourite star. The film follows Syd March (Caleb Landry Jones), who works for one such company, only he operates as a double agent, on the side taking in the viruses himself to extract from his body and sell to competing pirate virus distributors. He runs into some trouble when he takes a virus directly from the sick celebrity, Hannah Geist (Sarah Gadon), and finds out the next day that it wound up being fatal. On top of that, a lot of the wrong people know that Syd was one of the last people to see her alive and may have contracted her illness. That makes him a very valuable commodity in a world with no more Hannah Geist.

Brandon, like his father, knows how to set a dark and eerie mood and use blood sparingly, until select scenes, mostly in the third act as Syd's health deteriorates. The understanding that tone is a far more powerful tool than blood effects is a skill that took his father as far as he did. Not to say that there aren't any gruesome scenes because there certainly are. It is just used to disturb in scenes of high emotional intensity, but even still, there is some restraint. Antiviral is a very intense movie from start to finish with a plot that weaves through a number of turns, taking you by surprise in a very slow and confident manner.

What is interesting about the film is that it has a severe lack of star power, which fits in its celebrity concept quite well. The only widely recognizable name is Malcolm McDowell, who has a fairly minor role and, let's be honest, isn't quite on the A-list anymore. But what is interesting about the choice of Caleb Landry Jones as the lead is that he is quite intentionally uncharismatic. His character is not loveable. In fact, he is almost villainous as he is betraying his company and has very little compassion for those who he inflicts viruses into, including himself. Why we follow him through the movie and even sympathize with him is beyond me. I suppose it's because in the whole movie he is sick and helpless. But this is very unbecoming of a lead in a feature, but it lends a curious juxtaposition to the theme of the film. Jones is a very talented actor, that much is certain, but he is not what some might consider celebrity material because he isn't obviously beautiful. This parallels aspects of the film because, in this world it appears that people aren't in love with celebrities because of their appearance anymore. The infatuation becomes something so much more, the idea of the person is the celebrity, not the person themselves. It begs the question why tabloid fame exists at all. If it not for appearance or accomplishments, then what is it for? Here it is cultural and I think that our culture is not too far from it.

Like I said, it's not too subtle, but I see no harm in making blatant statements about the flaws of our society. Antiviral has a clear agenda, but its one I happen to agree with. Like most science fiction, it wants to prevent the future and not just predict it. The unfortunate part is that those who need the message of this movie will not likely watch it. I mean, those who read the rag magazines about celebrity bikini bodies are not likely the art house horror crowd. Such is the burden of being an artist.