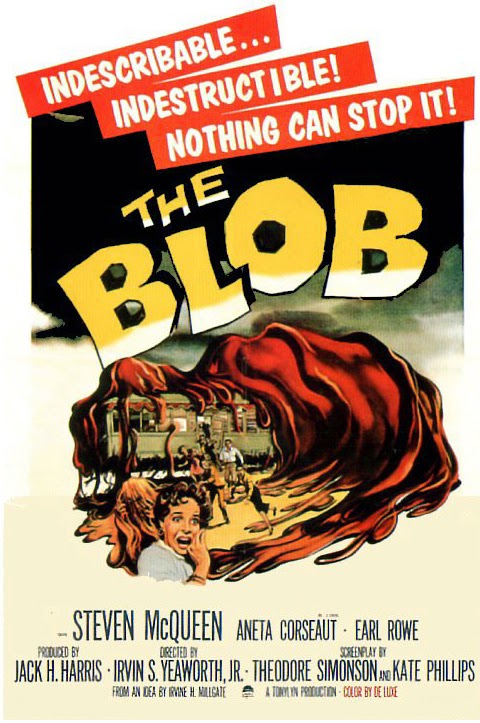 We've all heard about The Blob and some of the images have become some of the most iconic scenes in classic horror history, but I haven't talked to too many people who have actually watched the whole movie. I decided to review this film for Halloween because I like to discuss many horror classics to see how well they hold up today. Besides, last year I pretty much just reviewed vampire movies and I wanted to do something a little different. I mean, you have to admit that a giant blob isn't a typical horror monster. I don't know of any other movies that have featured this kind of monster except for the 1988 remake, which I haven't seen as a whole. But I remember quite a few years ago I saw the beginning on TV and it was quite gruesome and I was asked to turn it off. Hard to imagine it stemming from this 1958 classic, which was quite tame even by 1950's standards... at least I think. I just remember 1958's Horror of Dracula, which I reviewed last year which was a fair bit darker and grittier than this movie. Though, maybe that one was just really edgy for the time and The Blob was more the norm.

The story is as basic as it gets. Steve Andrews (Steve McQueen) and his girlfriend Jane (Aneta Corsaut) are having a romantic night together in his car on some romantic spot, as so many 20-something teenagers do in these films, when they see a rock from space hit the ground near their town a fair ways into the woods. They decide to go investigate. Meanwhile, over in the woods, an old man (Olin Howland) goes to investigate the crash and finds a rock, which splits and has a small blob of goo inside of it. It quickly crawls onto him and engulfs his hand. In pain, he panics and runs out to try and get help. He runs into Steve and Jane who take him to the town doctor (Stephen Chase). But whatever that blob is... it seems to be getting bigger with everything and everyone is eats! Dun dun duuuuuuunnnnn!

The Blob is kind of a fun b-flim by today's standards, but truthfully a little bit underwhelming and even at times a bit frustrating. It's a lot lighter than the 80's version which disturbed me, though I don't know if that one will fulfil me in any way either, and I struggle to see much of a connection between the two other than the name and basic concept; Blob attacks people and gets bigger. That one at least showed us the action, where this one, likely due to budget and technological constraints of the time, hardly shows us anything. Sometimes we just see Steve McQueen reacting to something that the blob is doing and then he awkwardly explains it. A big rule of cinema is show, don't tell, and I guess that's tricky if you can't actually show what's going on. I suppose there may have been more graceful ways around this issue, but nothing springs to mind other than better writing.

I like how innocent this movie is all in all. It's a cute snapshot of the 50's, or probably how people want to remember the 50's, and how everyone knew everyone else and kids were trouble makers but they were good at the heart and stuff like that. It's all really quaint, and then some jerk blob from outer space shows up and starts eating people. Every death is off screen and there is nothing gory which is interesting for a film with a pretty sizable body count. Apparently this creature devours 40 – 50 people and you wouldn't know it if they didn't say it. While I can understand the reservations of the film makers, I have to confess that the stakes didn't often seem very high and I wasn't often emotionally invested in the well being of the characters, except for the good doctor Hallen, who was caring and genuinely wanted to help. Jane's little brother, on the other hand, was clearly there to be cute and get into trouble, but I kind of wanted the kid to get eaten. If not for his bad acting, then just because he was an idiot. Seriously, it's was obvious that he was introduced so that he could get in trouble near the end of the movie. Little brat.

The real star of the show was the actual Blob. The effects on it were actually pretty decent for the day and showed a great deal of ingenuity when it came to making the scenes with it. They were used sparingly, but very well and I think that's why people remember this movie today. Not to mention that the idea of the creature is pretty creepy. It's a relentless and unforgiving opponent, with no concept of reasoning or mercy. There is no humanity to it as it is literally just a flesh eating blob. Vampires, ghosts, and werewolves all have a human characteristic. There can be motive behind their actions and as such, one can begin to determine their weaknesses, but here you have an alien creature with no obvious mind and seems to be driven entirely on the instinct to eat and grow. It's actually kinda scary... in concept anyway. I suppose that's what makes The Blob really worth watching.

By the way, it's pretty obvious that Steve McQueen was way too old to be playing the 17 year old Steven Andrews. He was 28 at the time and he looked it. It's... well, it's the movies for you.